Today’s Team Review is from Cathy, she blogs at http://betweenthelinesbookblog.wordpress.com

Cathy has been reading Flesh by Dylan J Morgan 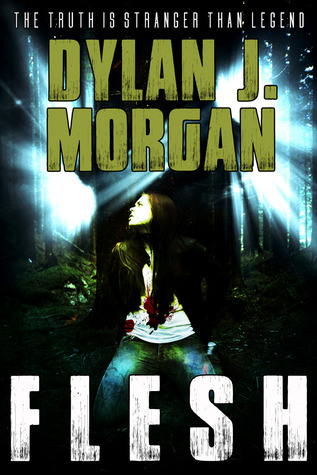 A graphically gruesome opening chapter sets the scene for the horror which surrounds the town of Vacant. The townsfolk are living in fear of the unknown entity after a couple were killed in their own home. In order to appease whatever lurked in the woods, visitors or people passing through were to be chosen as sacrifices, at the instigation of the fanatical Pastor Nielsen and corrupt Mayor Wyatt. Deputies Manning and Brady select the victims and Sheriff Andrew Keller and Deputy Matthew Nielsen dispose of the remains.

The main characters, although very well interpreted, are all flawed and damaged in one way or another, drug addiction, alcoholism, corruption, and initially none of them were in the least appealing. Even Deputy Nielson who, although he seems unconcerned about the grisly tasks he performs in the woods, wants to help Sheriff Keller and stop the killings, yet in his own way he also has a desperate addiction.

Then about halfway though I began to root for Sheriff Keller. The past he’s been running from and trying to drown in whisky and beer, unexpectedly appears in Vacant, turning him into more of a sympathetic character. He has no choice but to face his demons and he tries very hard to fight as the suspense escalates. I liked the inclusion of Joe, the Chippewa Native American, who brings everything to a head when he shares his knowledge and beliefs.

The vivid imagery and detailed description of the setting creates a powerful representation, as do the inner thoughts and feelings of the characters. The sense of fear, panic and disbelief as events unfold. Dylan Morgan puts his own unique spin on a Native American legend in a lurid tale of sex, murder and horror contained in a well thought out and suspenseful plot. The narrative is paced well, incorporating some surprising twists and treachery.