Jessie has been reading A Shifting Of Stars by Kathy Kimbray 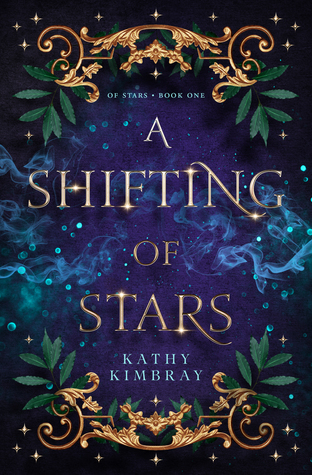 The words you guys. The words. Yes, I know, you are thinking. “Uh, excuse me Jessie, books are literally made of words.” But these words describe places in such lyrical ways they roll around in my head painting vivid pictures. I was only on page two…  “Beside me, buildings cringe with moss. Walkways glisten with dirty puddles. Teetering balconies slouch from walls with garments strung between casements like cobwebs.” …and there I was, in love.

I’d like to think it’s more than personal preference that makes this setting of such a vivid scene so important. Thrown into a whirlwind of a fantasy world where the heroine is being marched away in chains by the end of the first chapter you’ve got to be able to get your bearings quickly.  And the beautiful descriptions make sure you do.

I hit the unveiling of the big plot point and found myself in an unexpected conundrum of not knowing whether to complain to the book (sometimes I talk to my books) that “Your characters “big news” is the same thing everyone says and does” or yelling “OH MY… You did what now?!?” which brought me right up to the end where I still was in a conundrum because I couldn’t decide if I was so mad the book ended because I just really wanted to know what happened next or that a reader should seriously and legitimately not be left hanging at such a point.

Would I recommend it? Fellow YA Fantasy readers I suggest you give this one a read and then call me so we can talk about that ending!

A squandering emperor. A handsome stranger. A reluctant heroine. And the ancient magic that will capsize a kingdom.

Seventeen-year-old Meadow Sircha watched her mother die from the wilting sickness. Tormented by the knowledge that the emperor failed to import the medicine that would have saved her, she speaks out at a gathering of villagers, inciting them to boycott his prized gladiator tournament.

But doing so comes at a steep cost.

Arrested as punishment for her impulsive tongue, Meadow finds herself caught up in the kind of danger she’s always tried to avoid. After a chance meeting with an enigmatic boy, she’s propelled on a perilous trek across the outer lands. But she soon unearths a staggering secret: one that will shift her world—and the kingdom—forever.

Filled with longing and heart, surprise and wonder, A SHIFTING OF STARS is perfect for fans of AN EMBER IN THE ASHES, RED QUEEN and SHADOW AND BONE.