Teri has been reading Guardian Of The Present Book 1: The Cube by Melissa Faye 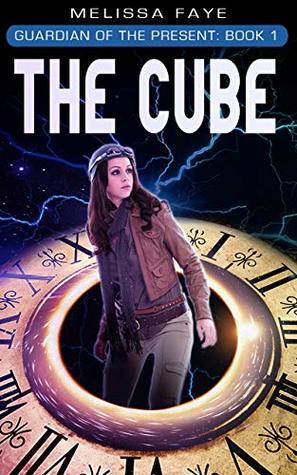 I’m pretty sure it was the original Planet of the Apes movies that made me a fan of time travel, so every time I see a book on the topic, it’s like a laser beam that draws me in.

I like the idea of June’s story being told in eight novellas – it reminds me of Stephen King’s The Green Mile.  All were quick reads, and each left the reader with a bit of a cliffhanger – the first book in the Guardians of the Present series is no different.  The traveler case June is dealing with wraps up in this novella, but shocking news regarding something from her past turns up at the end.

June is a very likable protagonist, and despite her unusual ‘job’, she’s trying to have a normal college experience – roommates, fraternity parties, and possibly a new love interest.  The clever names she’s given her self-invented weapons made me chuckle, and her understanding of and knack for technology has saved her numerous times in her line of work.  Currently, June’s three roommates aren’t really asking any questions about her mysterious behavior and oddly timed comings and goings, but there’s potential for some conflict in the future, and maybe the possibility of even taking some of them into her confidence.

Something I missed was more information on world-building.  Although it may be included later in the series, I was left wondering how June became a guard at such a young age, and how she met Ridge.  Is there someone over the program?  Are there guards throughout the country?  The world?  June encounters a traveler at Central Park Zoo, obviously a high traffic area, and later even sneaks in after hours, but no mention is made about park goers sighting them, security guards, or cameras.  Is there some gadget that prevents her from being seen?

This well-paced novella can easily be read in one sitting, and Buffy, Looper, and Veronica Mars are excellent comp titles.  I’d like to continue with the series, but hope the author fills in some blanks and gives readers a better grasp of June’s world and backstory.

June Moore is a normal teenager by day and a vigilante hero by night.

She guards our present day from time travelers from the future. Law enforcement can’t keep up with their futuristic abilities.

But June has an edge.

Her smarts and strength help her fight off these visitors before they can take advantage of our world. She sends those time travelers back where they belong…whether they like it or not.

Now it’s the night before her freshman year of college, and June finds herself face-to-face with a traveler. His motives are unclear, and he’s holding a strange cube.

She has to know what’s inside.

An extra second of hesitation allows the man to escape. June’s left alone. With the box. And with regrets…She should have sent the guy straight home.

If June doesn’t capture the time traveler soon he could really mess up the future for everyone. Who knows what kind of trouble he may cause? And if the cube opens…it might cause even more trouble. Something that would hit closer to home.

To save the future of those close to her, June must hunt the escaped traveler down.

…Before she runs out of time.