E.L has been reading Incognito by Khaled Talib 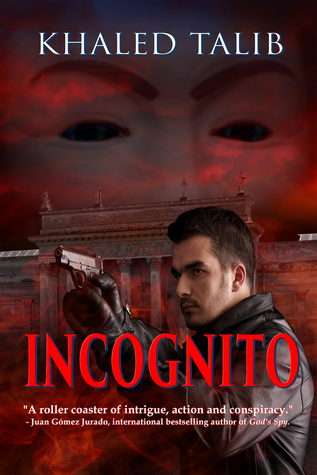 Incognito by Khaled Talib is a European based, action packed political thriller. Like most stories of this genre, the plot is fanciful in parts, but contains just enough credibility to keep the reader guessing.

The novel begins when the pope is kidnapped by an anti-Muslim organisation called The Sword. In response, an anonymous, apolitical, non-religious group known as The League of Invisible Nights, sends three agents to help the Vatican locate the pope. The plot centres around their efforts to uncover who is behind the kidnapping and save the pope.

The political aspect of the novel is what I found most interesting. Corruption is in evidence everywhere – from the Vatican to the police and at the highest government level. The Sword originated as a guerrilla force created by the CIA and NATO after WW2 but is now funded by big business and headed up by a Dutch Senator. It consists of a group of individuals motivated by their opposition to immigration and in particular Muslims.

The novel is very topical given that Islamophobia is on the increase due to fear often perpetuated by the media. Talib uses his novel to show how easy it would be to manipulate the public mood by staging acts of terror and blaming a specific group of people – in this case Muslims. The kidnapping of the pope is played out in front of the world’s eyes and Muslim extremists are presented as being behind the potential atrocity. Talib very cleverly captures our obsession with news as the kidnapping story is played over and over on a loop on every news channel.

Talib uses his novel as a means of challenging stereotypes about Islam. For instance, he goes to great lengths to show that women are not oppressed, pointing, for instance, to the fact that they don’t have to change their name to that of their husband.  While I applaud this, I did feel that it was slightly overdone, and not necessarily fitting with the genre of the book.

Another strength of the novel is the way it spans different parts of Europe: Geneva, Venice, Rome and The Vatican City are all brought alive by Talib’s descriptive skills. The sense of awe, history and beauty are successfully conveyed which lends an added layer of mystery to the proceedings.

Incognito is a novel written for readers who love plot driven, fast paced action and adventure. The action is relentless and there are very few quiet, reflective moments to try and figure out what’s going on; I think some contrast might have improved the reading experience for me.

The pace of the novel also has a massive impact on the characterisation. This is a novel with lots of characters but the death count is phenomenal. A new, potentially interesting character would be introduced only to be killed off by the end of the chapter.  We are told that they all have backgrounds in the armed services but that’s about it. A little more insight into the characters would have made me care more about what happened to them.

The biggest disappointment for me is Isabelle Gaugher who Talib presents as being equal to the men. However, when we are first introduced to her she makes a coarse comment about her menstruation that is clearly meant to show she’s ‘one of the men’ but it just felt inappropriate. Her tough no-nonsense attitude is then justified by the fact that she has previously been raped. I think Talib had good intentions in wanting to create a strong female character but then felt he had to make her ‘damaged’ which effectively offsets her strength.  Couldn’t she just have been strong, full stop, without being coarse or having ‘issues’?

I am probably not quite the target audience for this novel which, despite my misgivings, has many merits. If you enjoy fast paced action adventure that is very much plot-based then this one is for you. I can imagine it being a great holiday read for anyone who wants to lose themselves in a political thriller.

Specialist Ayden Tanner is dispatched by a covert division of the global hacker group, Anonymous, to find the pope who is missing.

A frantic search begins in Italy and beyond its borders amid speculation that the Holy See may know more than they are telling.

Khaled Talib is the author of SMOKESCREEN, INCOGNITO and soon to be published, GUN KISS (Imajin Books).

Khaled is a former journalist with local and international exposure. His articles have been published and syndicated to newspapers worldwide, and his short stories have appeared in literary journals and magazines.

The author, who resides in Singapore, is a member of the UK Crime Writers Association and the International Thriller Writers org.