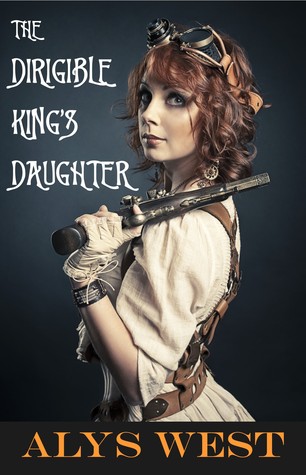 Harriet Hardy never set out to become a kickass pistol-packing Victorian feminist. Raised to expect a proper middle class life of servants, parties, fancy dresses, and the welcome romantic attentions of a dashing soldier, she is instead forced to leave all that behind when her father’s death reveals his business failures. She moves to Whitby, working for and then inheriting her uncle’s property management business when he dies. By the time eight years have passed she is—by Victorian standards—a spinster whose profession, disgraced family, and age make marriage an impossibility. And that’s all before she’s arrested for the attempted murder of a local politician when he attempts “something very improper”.

So far, all this is fairly standard romance novel stuff. And indeed, the steampunk bits sneak in subtly at the edges… a mention of a steam carriage here, an airship there, perhaps a cogwork-enhanced fortune teller or a mysterious “rod system” that carries data through a giant pipe running alongside the road. This is a kinder, gentler steampunk world in which Victorian manners and dress take precedence over any explanations of the internal combustion engine’s failure to launch or the dirigibles’ failure to explode regularly a la Hindenburg. The focus of the story remains firmly on Harriet’s conflicts with her father’s death, her upcoming trial, the return of Charlie—former dance partner now even further socially removed by his family’s ascendence into the peerage—and a possibly/probably fake engagement.

Within those boundaries, The Dirigible King’s Daughter is a lovely story. The pace steadily picks up as it moves to the courtroom dramatics, the romance is sweet rather than hot or steamy, the dialog charming. I enjoyed Harriet’s confusion as she attempts to reconcile her heart with the strong pragmatic woman her head tells her to be. With the exception of Harriet herself, there is very little character development, but since the supporting characters are stock tropes, little more is needed. Homage is paid to romance tropes, with some updated nods to feminist leanings. There is a bit of steampunk worldbuilding, but like the whisps of steam lingering between the buildings when Harriet visits London, the science behind the steam isn’t even mentioned.

The Dirigible King’s Daughter is a quick entertaining read for those who enjoy romance, steampunk, or just a charmingly-written and beautifully edited little book that makes few demands and delivers exactly what it promises.