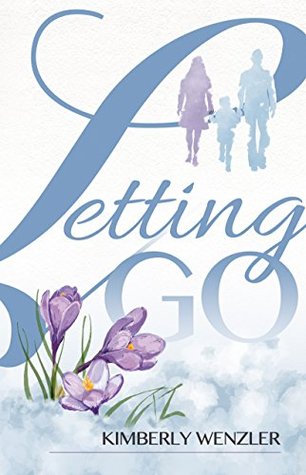 I was confused as to how to review this book as it’s difficult not to give the whole theme of the story away, so I’m going to tiptoe through it.  Suffice to say that there’s a great surprise very early on that made me think, “oh, clever!”, and I imagine it will have the same effect on you!

Set in Long Island, New York, Letting Go shows wife and mother Lucy observing how the shocking event of 2007 (I’m not telling you!) affects husband Max, son Sam, best friend Hope, and even the troubled babysitter, Benjamin, whose story runs concurrently.  It’s a great idea, and Kimberly Wenzler has made a good job of it.

The novel is very well presented and nicely written, the characterisation very good, particularly Max, I thought.  He’s a writer whose creativity is facing a brick wall; his emotions zigzag through many highs and lows.  I thought he was so realistically written.

The people in this story live a conventional, middle class life, with conventional attitudes, a little too much so for me; Lucy describes her ‘picket fence’ existence.  She’s quite a ‘girly’ sort of woman (who went down in my estimation when she described the brilliant ‘The Road’ by Cormac McCarthy as ‘incredibly dreary’!), but you couldn’t not like her.

The only problem I had with this novel was that it was a bit short on plot; not much happens.  It’s emotionally driven, an exploration of family relationships, to a large extent.  That’s not to say there isn’t a proper plot, there is, and it has several strands, but domestic detail, incidental conversation and Lucy’s observations/impressions form a large part of it; elements of conflict are touched on only lightly, and I kept thinking there was going to be something to get my teeth into only to find that the drama I hoped for didn’t happen.  However, it’s well put together and is a book you can put down and pick up again without having to remember the kind of intricate detail that has me searching back over previous pages.  There was one relationship I saw brewing very early on (and I was glad I was right, I wanted it to happen!), and a mystery is solved at the end in an unpredictable and very convincing way.

One very positive aspect of this story is that the subject could have been oozing with schmaltz, but it’s not.  I don’t do tearjerkers at all, and wondered if this might become overly so, but it didn’t, it’s the sort of book that makes you feel a little bit sad and smile a little bit, but doesn’t slap it on with a trowel.

I think this will be greatly enjoyed by people who like a slow-paced, emotionally orientated study of family relationships, with plenty to ponder over.  It’s certainly an original idea, and is very well executed.