Twisted wire is a complex spy thriller. The prologue introduces us to Nigel Silsbury, a spy who is searching for the mole in MI6, a man known as Krane. Enda Osin is a political reporter for the Herald newspaper, he returns from holiday to a strange message on his phone. He follows up the lead and finds himself involved with industrial espionage and the theft of material about a high-speed experimental air craft.

The storyline involves the Americans, Russians, the EU and the British secret service in a plot line with plenty of twists and turns as spies are exposed, sabotage planned and deals are double crossed. Enda Osin, his wife Jessica and a handy right hand man called Fish sniff out a story and try to help justice win. Determined to be able to get a story for the paper Enda goes to great lengths and takes huge risks as he follows a trail to Germany and Europe.

A good storyline, a little of the dialogue didn’t flow on occasions as much as I would have hoped and I did struggle with the amount of characters and all the names, however a good ending which I didn’t see coming and had me checking back to the beginning of the book to re-read the prologue.

Fond a copy here from Amazon.co.uk or Amazon.com

View all my reviews on Goodeads

November 30th – The Last day of the Mystery November book tour and out guest today was Ethel Lewis and her book Twilight Images. http://wp.me/p2Eu3u-5TH

Am working with Terry Tyler to gather some more genuine book reviewers for the review team. Creating more pictures for my Tweets about my book reviews as visual aids really do help.

December 2nd – Just sorting out the post for the books that I have featured in two local magazines, the online version for one has a glitch so can’t post about it yet. Am reading Twisted Wire by Ray Stone.

December 3rd – So busy on the blog, a diary malfunction means I have 4 posts going out today and tomorrow with book reviews, book review team posts, a guest author piece and my Fleet Life and EHDirectory post. We are off out for tea tonight for the oldest to help her friend prepare for a theory driving test, then I’m meeting up later with another group of friends for dinner. Will be passing on books I’ve read for others to enjoy.

December 4th – Just adding new reviewers to the team today, hopefully we can get through more of the books we have on our list. Have started filling my 2015 diary with book review slots today.

December 5th – Signed up to help fellow authors promote some of their books. Today I did a book cover for Charles Yallowitz who has a new fantasy book out on December 12th. I shall also be helping Barb Taub soon, plus I’ve taken on 5 new books to review for Brook Cottage in the New Year.

December 6th – A quiet day today. Posted a couple of book reviews for the book review team and pointed another author in the direction of the blog where he can decide if he wants to add his book to the team list. Trying to get a book finished today but got side-tracked by a re-run of Harry Potter and the Chamber of Secrets. Seen the film loads of times but will always watch any of them again and again. Planning a Harry Potter film day once the Christmas holidays start.

Today’s Book review comes from Noelle, she blogs at http://saylingaway.wordpress.com 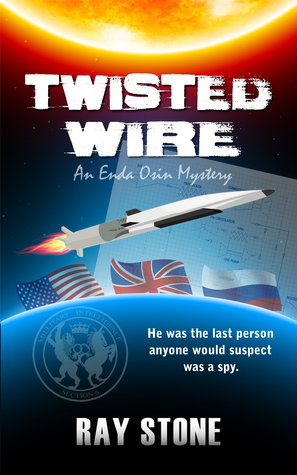 Looking for a true spy novel that’s as twisted as the title of this one? Look no further. This second book in the Enda Osin series by Ray Stone takes the reader on a wild ride from England to Belgium and back, with double and triple crosses.

Enda Osin is a correspondent for a major British newspaper and never turns down the opportunity to investigate political intrigue. At the beginning of this volume, he finds an odd message left on his phone, one he believes was meant for someone else. Unknowingly, he has been friends since college days with a Russian mole in MI6, who has now found a way to use him as a courier. He will be bringing critical information stolen from an American firm developing a hyper-speed aircraft to the head of the company producing a similar aircraft for the European Union. In actuality, this information is permutated and will cause the EU aircraft to crash, while the original plans will be sent to Russia, to ensure that the Russian hyper-speed aircraft is the only one to successfully fly.

Enda senses something is going on from the get-go and decides to go ahead with his apparent role in the plot, knowing that he is becoming embroiled in a dangerous situation that could mean jail for him but anxious get the story for his paper. MI5 and MI6 cannot be trusted because they are playing politics with each other as well as with Russia and the USA, and soon Enda is on the run from a ruthless Russian agent, Voss, who is linked to several other dubious characters. No one is who she or he is supposed to be except for Enda’s wife, the beautiful Jessica du Ross, and a man he has used previously, Fish, a jack of all trades. Or is he?

If there is a downside to this book, it is the unbelievably complex plot, which is cleverly constructed, but leaves the reader at times not knowing who is who. It ends in an unexpected double twist.

It took me a while to work through all of the twists and turns, but if this book is similar to Ray Stone’s first in the series, I will definitely read that first one.

Political intrigue, industrial espionage, and games played between MI5 and MI6 are just the beginning to this thriller that brings the Herald’s political columnist, Enda Osin, into the vortex.  Add Moscow’s fingers in the pie, a mole in the British secret service, and an enigmatic telephone call, and “Twisted Wire” becomes a thriller worthy of other great “spy versus spy” genres.

Enda Osin is a political columnist who, in this second of Ray Stone’s trilogy, becomes accidently involved in a ginormous political scandal when he receives a mysterious telephone call from a seemingly wrong number.  Edna finds himself caught in one of the most thrilling and nefarious adventures ever published in a novel.

“Twisted Wire” has richly developed, unforgettable characters.  They are believable and three-dimensional.  Ray Stone displays his talented ability to keep the story interesting and organized, while moving along quickly with just the rightly-placed twists that the reader would expect.   The dénouement is, indeed, a grand surprise, and I will leave it to future readers of “Twisted Wire” to discover it as I did.

I handily give five out of five stars to Ray Stone’s “Twisted Wire.”