Olga has been reading A Woman Of Valor by Gary Corbin 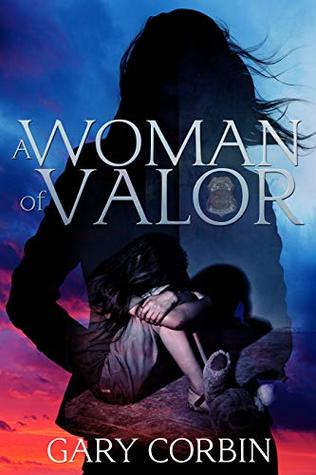 This novel combines the police procedural (a rookie policewoman following in the footsteps of her uncle, who was more of a father and hero figure for her than her own father, joins the police local police force, learns the difference between the books and the streets, and tries to catch a criminal that brings back memories she’d rather forget) with subjects and themes more common in women’s fiction (the protagonist was sexually abused as a child and despite her best efforts is still affected by the experience; she has to confront plenty of prejudice and sexism in the police force, has a difficult relationship with her father, and can’t help compare herself to her best friend, who seems to have a much easier and happier life than hers). The author manages to make the mix of the two genres work well, providing plenty of details of how the local police force works that felt quite realistic (and the language and descriptions of the characters, narrated in the third-person —mostly from the point of view of the protagonist— seem straight out of a police report), and demonstrates a good insight into the mind-set of a young woman who has survived such trauma and finds herself confronted by sexist, abusive, and old-fashioned attitudes. (There are small fragments of the book told from some of the other characters’ point of view, also in the third-person, but those are brief, and other than giving us an outsider’s perspective on the main character, I didn’t feel they added much to the plot). Her fight to overcome her difficulties, to take other people into her confidence, and to make meaningful connections, is inspirational and will also feel familiar to readers of literary fiction or women’s fiction.

As mentioned in the description, this book feels, unfortunately, very current, not only because of the abuse (even if the story was originally developed well before #metoo shone some light into the scale of the problem), but also because of the prejudiced attitude of the police towards ethnic minorities (racial profiling is evident throughout the plot), and the way social media can spread falsehoods and fake news, ruining somebody’s reputation only to gain a bit of notoriety. There are plenty of action scenes, chases, and violence (although not extreme) but there are also the slow moments when we see the characters patrolling the streets, making connections with the local gang, or interacting with the locals, and that also felt more realistic than the non-stop frantic rhythm of some thrillers, that seem to never pause for characters to have some breathing space. It shows the work of the police in its various forms, not always running after criminals, but there are also the quiet moments (waiting around, doing research, manning the phones), and when there are actions scenes, these are also followed by consequences that some novels brush over (filling up forms, reporting to Internal Affairs and seeing a having a psychological evaluation after a lethal shooting). Although it is mostly set in a chronological order from the moment Val joins the police force, there are chapters where something makes her remember what happened ten years ago, and we get a flashback from her perspective as a 13 y. o. girl. These interludes are clearly marked in the book, and rather than causing confusion, help us understand what Val is going through and why she reacts as she does to her experiences. She is very closed off, she is insecure, finds it difficult to trust people, men in particular, and struggles to maintain her professionalism when confronted with certain types of criminals. There is much discussion in the book about different types of policemen (I’ll leave you to read about those yourself), and she fights hard to be deserving of her uncle’s memory.

The author is skilled at managing a large cast of diverse characters: Val’s friend, Beth; her father, who is on a slippery-slope of self-destruction; Gil, her partner, a sympathetic and likeable character; the other policemen in the team, including her superiors (more enlightened than most of the other men), the other women in the force (and there are wonderful scenes of sisterhood between the women), her brother, sister-in-law and her cute little niece (obsessed with becoming a policewoman like her aunt), the members of an African-American gang (who although tough and engaged in criminal activities, live by their own code of honour), a blogger with inside information who is happy to distort the truth… and of course, the nasty criminal, who has no redeeming features. Even those who play a small part are realistically portrayed and add to the atmosphere and the realism of the novel. This is not one of those books that take place in a city but feel as if only four or five people were living there. We see neighbours, the owners of businesses, and we also have a good sense of the connections between the local police force and the others in the same county and state.

On reading the author notes after the novel, I felt quite touched by the story behind it, and understood why it feels so personal, despite this being a novel with a main female character written by a male author. In the acknowledgements, the author thanks several members of law enforcement for their expertise and advice, which he has incorporated well into the novel, and the book contains a list of questions that should prove particularly useful for book clubs.

In my opinion, this is a novel that includes a solid plot, with a main bad character (who is truly bad) all readers will hate, some lesser unlikeable characters (the blogger, many of the other policemen Val comes across), some intrigue (who is feeding inside distorted information to the blogger?, what really happened to Val’s uncle?), a hint of romance (don’t worry, honestly. This is not a romantic novel), sympathetic characters easy to engage with and root for, even if we might have very little in common with them, particularly Val and Gil, and a more than satisfying ending.

As I said, I read an early ARC copy of the book, so there might be some minor changes in the final version. This is a book that contains some violence, shootings, and sexual abuse of young girls (and although not extremely explicit, I am aware this could be a trigger for some readers).

Rookie policewoman Valorie Dawes has a mission: take men like Richard Harkins, a serial child molester, off the streets of her small hometown of Clayton, CT—for good. Things start off well as Val’s trusted senior partner and mentor, Gil, shows her the ropes and helps her survive the nastiness they encounter on the streets–and in the chauvinistic office politics at the precinct.

Despite Gil’s support, Val becomes increasingly isolated within the department and vilified in the public eye as reckless and incompetent. In response, she devotes all of her time and energy to chasing Harkins, but he proves to be both elusive and cruel, continuing to victimize young girls and pressing his threats closer and closer to Val’s own inner circle.

Can Valorie overcome the trauma she suffered as a child and stop Harkins from hurting others like her—or will her bottled-up anger lead her to take reckless risks that put the people she loves in greater danger?