Shelley has been reading Tempted By Mr Wrong by Jacquie Biggar 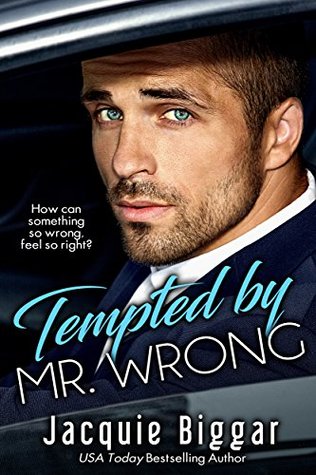 We are introduced to Tammy-Jo as she wanders down the rain soaked street in broken heels after being humiliated by her husband at the Country Club. Immediately we get the impression of a strong woman who, despite her predicament, is still sassy.

Jason arrives on the scene like a knight in shining armour (or rather, a cute chap in a Mustang) and we begin to learn there’s a history between the two. Pulled together by their parent’s relationship, TJ and Jason are step-siblings, but ten years ago their teenage hormones got the better of them, and they explored a relationship. It was Jason who suddenly walked away without explanation and TJ is still hurting.

Married to Tim, a power-hungry man, TJ has tried to suppress her feelings for Jason but having him back in her life is quite a jolt.

Jason’s return is not as innocent as it seems. He wants to visit his mother who is dealing with dementia, but he also still loves TJ. Seeing her again stirs up all the old feelings. Unfortunately, there’s also the small fact that he is there to investigate TJ’s father with the intention of sending him to jail.

Within the first few pages, we uncover the simmering passion that TJ and Jason still have for one another all while falling over the dead body of TJ’s husband on the front lawn.

Who killed Tim? Is TJ involved? What secrets is her father keeping?

I liked this book. It was well written, and I could connect easily to the characters. If I’m honest, I don’t think it was long enough. It didn’t go deeply into the criminal activities or the investigation around the death of TJ’s husband, and I would have loved to find out more about the dark dealings. There were secondary characters whose stories didn’t get their full potential due to the short length. However, this means there’s scope for a spin-off.

It’s a sweet romance where the hero and heroine play tug of war with their feelings, but it’s wrapped up nicely at the end. There is also a sensitive side plot about dementia, and this is tastefully done. It’s a hugely distressing disease, and the author handles it well.

All in all, Tempted by Mr. Wrong was a good read.

Tammy-Jo Hawthorne’s marriage was floundering, but she never expected her husband to make her the laughing stock of Magnolia.

And she definitely didn’t expect to trip over him in their front yard after he’d been murdered.
Jason McIntyre was forced out of his home and the love of his life by the man who’d haunted his nightmares for ten long years.