Today’s second team review is from Barb, she blogs at http://barbtaub.com/

Barb has been reading Guardians of the Sky by Shelley Wilson 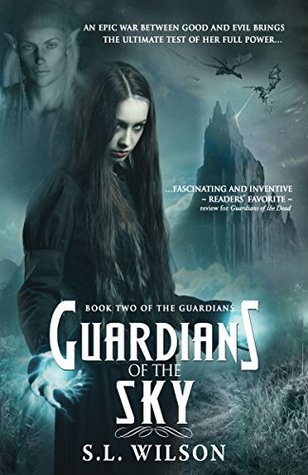 In my review of the first book in this series, I talked about how author Shelley Wilson nailed the elements of the magical girl coming-of-age story. She continues to apply those tropes in Guardians of the Sky. But now she goes deeper into almost all of them:

At the beginning, I had a few issues with the storyline. For me, there was way too much backstory that dragged down the beginning chapters. In Book Two, the Magic Power Upgrades still seem to occur in the nick of time, along with corresponding Villain Power Upgrades. (Last time Amber fought a general, this time it’s an Evil Queen, and next time…?) She doesn’t spend much time getting familiar with her new powers, but that actually becomes a recurring joke as everyone watches to see what over-the-top fire/explosion/destruction occurs when she does use them. The prince, despite being her love interest, has almost no personality to me. I think I’d care more about their relationship if he had some flaws and karmic angst. Amber’s mother is also an emotional dark hole. I have no real sense of what she feels for the daughter whose childhood she missed, or even for her absent husband.

But for me as a reader, it was great to note author Shelley Wilson’s leap forward in her confidence and mastery of the craft. Main character Amber shows much more depth, both in her romantic life and in her emotional growth. For example, when speaking to the warrior/traitor Aaron, Amber is amazed to recognize a kindred emotion:

“How could this evil warrior, who beat horses and slapped girls across the face, be so similar to her? She understood that need to belong. It was why she was in Avaveil. She had followed the dream of a reunited family and a better time.”

I was also delighted that (at least for this book), the author gave up on that hoary YA bastion, the love triangle. And while that meant that Connor—whose personality was in fact more fully dimensional than that of the fae prince Radka—had a more ambiguous role in this book, it did at least spare us the triangle. There was a respectably scary evil technology that threatened every magical creature, although I couldn’t help wondering why (and I’m struggling to put this in a non-spoiler way) the ones who had access to that evil tech didn’t grab its power for themselves. But—and this is what brings the whole book up to five stars for me—Wilson not only answers that question at the end, but uses it to springboard us into the next volume, while at the same time brilliantly wrapping up the details of the current story arc.

I absolutely love it when a series author knows how to use a little cliffhanger to get us to the next volume while satisfying us that the existing story arc is nicely finished off. And I can’t wait until December for Guardians of the Lost Lands, the next book in this delightful series.

I reviewed Guardians of the Sky (Book 2 in her Guardians series) by Shelley Wilson for Rosie’s Book Review Team.

*I received this book for free from the publisher or author in exchange for an honest review. This does not affect my opinion of the book or the content of my review.*