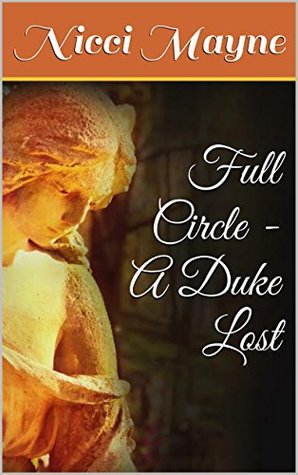 This is a historical romance, set in Regency England. It has three main characters and four distinct parts.

The first part is poetic and unhurried. It takes us through an intense and beautiful love story between a Duke and a young deaf girl. Bram is the honourable Duke of Bramford, who has fought for his country and is very loyal to the crown. The wedding had been arranged by his mother since the bride was two years old! Anna is an orphan who has been living practically on her own all this time, in an isolated castle in Scotland, waiting for her betrothed. When they meet, in her 18th year, they are both surprised to fall in love. I thought I was going to read a sweet, traditional romance, because their love story was drawn out in great detail. I didn’t mind, because I love historical romances, but I did wonder where the story would be going.

The second part of the plot moves on with the only obstacle to their happy marriage, namely Bram’s best friend, Michael, Earl of Milford, who thinks Bram should marry a richer and more worldly society lady. Surprisingly, Michael also falls in love with Anna, and although their friendship is threatened, Michael finally remains both their friends.

The plot then takes a third surprising twist (I can’t go into any detail without including a spoiler), and Anna will learn that her husband is not the man she thought he was, and that he has other priorities and duties in life, which exclude Anna and their children. Anna must turn to Michael for support, with Bram’s approval.

Finally, the title refers to the end of the story in which harmony is restored, at great emotional cost to all involved. It’s not a sad ending, although it’s not a perfect HEA either. I think it’s the best possible ending, although I can’t help feeling sorry for the way in which one of the characters is excluded from ‘the circle’.

The three main characters were engaging, and the plot, which was slow at first, moved on well in the second part. Especially for lovers of historical romance.

6 Beauties From My Hampshire Garden For This Week's #SixOnSaturday Gardening Meme #Gardening #InMyGardenToday #Flowers
The baby Great-tits have come out of the bird box. This one looks a little frightened.
I 'have grown very fond of the clever Sinhalese police inspector', says @lizannelloyd with her review of historical #Mystery Break From Nuala by Harriet Steel
A Police Officer's #Memoir. Black, White, and Gray All Over by Frederick Reynolds, reviewed by Olga, for Rosie's #Bookreview Team #RBRT
3 #Horror Novellas.
From 1937. These Will's #cigarettecards depict English wild flowers.
Garden Hints from 1923. (Wills cigarettes)
'Every single one of us has an unlimited source of potential for personal growth'.
The Rhododendrons are coming into flower #inmygarden