A Country Escape by Katie Fforde
My rating: 4 of 5 stars

A Country Escape is a women’s fiction novel set on a farm in the Cotswolds. A distant relative has offered Fran a chance to own her own farm; she just has to prove she can be a successful farmer for a year.

Aunt Amy is now in a care home, but she’ll only leave her beloved farm to someone who can match her own love for the pedigree Dairy Shorthorns and the ancient landscape. With the help of Tig, the herdsman, her friend Issi and a handsome neighbour, can Fran drag the farm from debt with her cheesemaking plans? Or will she be beaten by a second relative: a farmer from Australia who is a closer relative to Amy, with a good farming background?

This book has a stunning setting and Fran’s cheesemaking was an enjoyable addition to the country escape theme. I also liked the idea of Fran’s supper club which put her chef’s background skills to good use. I’m lucky to know a little about Dairy Shorthorn cows, so this gave the book another thumbs up from me. Plus there is an episode which will appeal to any dog-lover, I won’t say more as I want to avoid spoilers.

Overall a great feel-good read which fans of Katie Fforde can rely on for a pleasing piece of escapism.

Fran has always wanted to be a farmer. And now it looks as if her childhood dream is about to come true. She has just moved in to a beautiful but very run-down farm in the Cotswolds, currently owned by an old aunt who has told Fran that if she manages to turn the place around in a year, the farm will be hers. But Fran knows nothing about farming. She might even be afraid of cows.

She’s going to need a lot of help from her best friend Issi, and also from her wealthy and very eligible neighbour – who might just have his own reasons for being so supportive. Is it the farm he is interested in? Or Fran herself?

Catherine Rose Gordon-Cumming was born 27 September 1952 in England, UK, the daughter of Shirley Barbara Laub and Michael Willoughby Gordon-Cumming. Her grandfather was Sir William Gordon-Cumming. Her sister is fellow writer Jane Gordon-Cumming. Katie married Desmond Fforde, cousin of the also writer Jasper Fforde. She has three children: Guy, Francis and Briony and didn’t start writing until after the birth of her third child. She has previously worked both as a cleaning lady and in a health food cafe.

Published since 1995, her romance novels are set in modern-day England. She is the founder of the “Katie Fforde Bursary” for writers who have yet to secure a publishing contract. Katie was elected the twenty-fifteenth Chairman (2009-2011) of the Romantic Novelists’ Association. She is delighted to have been chosen as Chair of the Romantic Novelists’ Association and says, “Catherine Jones was a wonderful chair and she’s a very tough act to follow. However, I’ve been a member of the RNA for more years than I can actually remember and will have its very best interests at the core of everything I do.”

Katie lives in Stroud, Gloucestershire, England with her husband, some of her three children and many pets. Recently her old hobbies of ironing and housework have given way to singing, Flamenco dancing and husky racing. She claims this keeps her fit. The writers she likes herself is also in the romantic genre, like Kate Saunders. 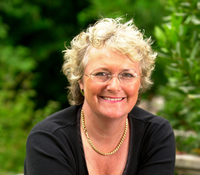