Welcome to Day 22 of #RomancingSeptember 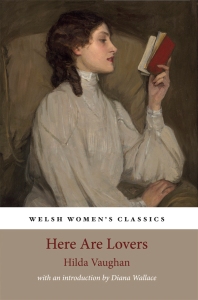 Can you tell us where Hilda would have called her hometown?

Hilda Vaughan was born and brought up in Builth Wells in Breconshire in Wales. She moved to London in her early twenties and married Charles Morgan, a drama critic and novelist. He encouraged her writing but his job meant that they had to live in London. Vaughan used to go back to Wales to write when she could.

Did she always write romance?

No, her novels are very varied. But they are very often about the problems of marriage and love between men and women. Iron and Gold, published in 1942, is a retelling of the old Welsh legend of the fairy bride of Llyn y Fan Fach who marries a mortal man for love. She tells him that she can stay with him only so long as he never strikes her three times with iron but, of course, being mortal he fails the test.

When did this book become a Welsh Women’s classic?

Where and when is the book set?

The book is set in Llangantyn, which is the name Vaughan uses for her fictionalised version of Builth Wells. But it’s set in the Victorian period in 1866, the very turbulent year of the Second Reform Act which extended the franchise to working men. One of the climaxes of the novel is the local election where there’s a riot.

Introduce us to Laetitia.

Laetitia Wingfield is the beautiful and bookish daughter of the local squire. Her mother is dead and she’s been partly brought up by her aunt in Italy so she has a head full of poetry and romantic ideals. Then she comes back to Llangantyn where she’s expected to live the life of a decorous Victorian young lady and she finds it terribly boring and frustrating.

Tell us about her romance.

On a mad-cap late-night ride Laetitia gets lost on the mountain in the mist and is rescued by Gronwy Griffith. The impoverished son of one of her father’s tenants, he’s a would-be scholar who dreams of a life of literature and poetry so he idealises her as a kind of Helen of Troy figure. Laetitia wants to be his patron so she lends him her father’s books and tries to encourage him.

What restrictions were there on romance in this period?

The class gulf between Laetitia and Gronwy makes any relationship between them impossible in their society. Her family in particular are horrified by her contact with him. But their story is paralleled by the love-story of Gronwy’s brother Peter and a local farmer’s daughter Elizabeth. Through them, Vaughan gives us a really interesting picture of the Welsh custom of ‘bundling’ or ‘night-courting’ where the young couple court in bed but fully clothed to satisfy the proprieties.

What else influenced the behaviour of these characters?

Vaughan’s actually fascinated by the ways in which people can be both educated and led astray by their reading. Both Laetitia and Gronwy have internalised over-idealised dreams from books which make them dangerously susceptible to romance and to each other. Like Jane Austen’s Northanger Abbey, Here are Lovers is a kind of ironised anti-romance but with a different ending.

Tell us about other books written by Hilda.

One of her best books is undoubtedly The Soldier and the Gentlewoman (1932) which is a brilliantly bleak and Gothic examination of a marriage which goes wrong. When the soldier, Dick Einon-Thomas, returns from the first world war he inherits an estate in Wales belonging to a cousin who has been killed. Gwenllian Einon-Thomas is the cousin’s unmarried daughter who has been running the estate but can’t inherit it because she’s a woman. She and Dick marry and things unravel from there…

Where can readers find out more about Welsh Women’s classic books?

Check out part two of today’s tour over with Stephanie in just a few hours where you can also catch up with posts from all our guests.

Autumn photos. Toadstool on my front lawn. A Heath Waxcap I believe.
'A younger version of Robin Hood perhaps?'
'Lovingly threaded with pieces of eight different fairytales and legends, with nods to German history, lore, and court culture throughout, Heartless Hette is not your average entry into the annals of retold stories.'
Autumn photos. Flowers from my garden, toadstools on my walk and a canoe on a dock.
'Travis Bow has spent a long time on Soulwinder and that time, that care, sings in every line.'
#lifequotes from my @_ruby_ashley_ cards
'It's about Odin and his brothers, Vili and Vé, creating the world. Except they're not very good at it and don't really understand what they're doing.'
Autumn photos. Chestnuts, Inkcap and Common Bonnet
'The perils and exploitation of refugees'. Lynne reviews The Bodies That Move by Bunye Ngene, for Rosie's #Bookreview Team #RBRT