Noelle has been reading Katherine – Tudor Duchess by Tony Riches 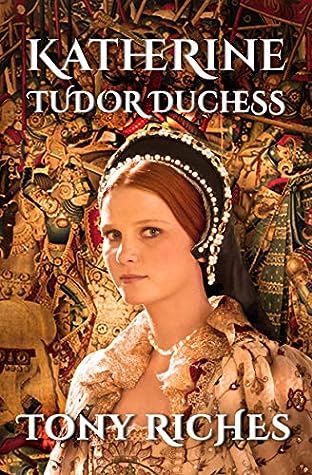 I was first introduced to Tony Riches historical novels when I read the books in his Tudor Trilogy, about the founding and growth of the Tudor family. The history is compelling. For Mary – Tudor Princess, and this book, Katherine – Tudor Duchess, the reader experiences the Tudor family from a woman’s point of view. The author hasn’t lost a step in the transition.

Katherine Willoughby was born at Parham Hall in Suffolk in 1519, daughter of the 11th Baron of Willoughby and his second wife, Maria de Salina, who had come to England as a lady-in- waiting to Katherine of Aragon. With her father’s death, Katherine inherited the barony. Her wardship fell to King Henry VII, who sold it to Charles Brandon, the Duke of Suffolk, his brother-in-law.

Her story begins as she is about to leave to join the Duke’s household. Her mother, who will continue in her service to Queen Katherine, sees her daughter as a good match for Henry Brandon, the Duke’s five-year-old son who is in the line of succession to the throne. Katherine is not so sure.

After traveling to the impressive Westhorpe Manor, Katherine becomes a part of the Brandon family, joining Henry and his two sisters, who are close in age to Katherine. She immediately is drawn to the beautiful, clever and elegant Lady Mary, wife of the Duke and sister to the King. (See Mary – Tudor Princess). When Katherine meets the Duke, she is immediately drawn to this rich and powerful man.

When Princess Mary dies after a lingering illness, Katherine mourns her deeply and is surprised when the Duke proposes to marry her. She is but fourteen and he is forty-nine. Beating the odds, theirs is a long and successful marriage, weathering the vicissitudes of the King’s many marriages and the reigns of Henry’s children. Katherine’s quick wit, devotion to learning and outspoken advocacy for the English reformation help her navigate the politics of the time. Through Katherine’s eyes, you meet the famous women of Henry’s court: Anne Boleyn, Katherine Seymour, Catherine Parr. You suffer with the deaths of her children and experience terror when Katherine’s faith puts her and her entire family in danger.

As impressed as I was by the story of Princess Mary, Katherine’s life left an even more indelible vision of an indomitable woman who not only survived a tumultuous time, but thrived. As always, the author’s attention to detail and depth of knowledge of the intrigue of the English court is superb.

I highly recommend yet another well-written and richly ornamented book by Tony Riches.

She stands up for what she believes in…
but such courage has consequences.

Attractive, wealthy and influential, Katherine Willoughby is one of the most unusual ladies of the Tudor court. A favourite of King Henry VIII, Katherine knows all his six wives, his daughters Mary and Elizabeth, and his son Edward, as well as being related by marriage to Lady Jane Grey.

When her father dies, Katherine becomes the ward of Tudor knight, Sir Charles Brandon. Her Spanish mother, Maria de Salinas, is Queen Catherine of Aragon’s lady in waiting, so it is a challenging time for them all when King Henry marries the enigmatic Anne Boleyn.

Following Anne’s dramatic downfall, Katherine marries Charles Brandon, and becomes Duchess of Suffolk at the age of fourteen. After the short reign of young Catherine Howard, and the tragic death of Jane Seymour, Katherine and Brandon are chosen to welcome Anna of Cleves as she arrives in England.

When the royal marriage is annulled, Katherine’s good friend, Catherine Parr becomes the king’s sixth wife, and they work to promote religious reform. Katherine’s young sons are tutored with the future king, Prince Edward, but when Edward dies his Catholic sister Mary is crowned queen. Katherine’s Protestant faith puts her family in great danger – from which there seems no escape.