Day 7 of the April A to Z challenge and you are joining me for my book character them, plus some audience participation below.

Letter G is for Garnet Sullivan in The Devil, The Diva and The Deep Blue Sea by Margaret Jean Langstaff 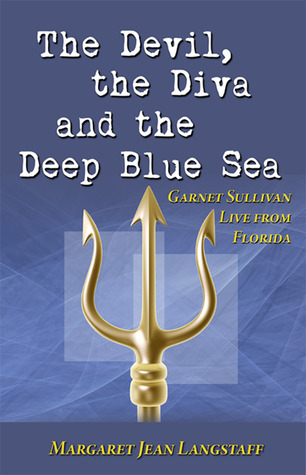 The Devil, The Diva and The Deep Blue Sea is a Garnet Sullivan mystery set in and around Punta Bella in Florida. It’s a high-speed explosion of words and action as Garnet tries to uncover the story behind two local murders.

Garnet is a reporter for The Indian River Times and has a nose for a tale as good as her very own dog Ringo, who is joined by Diesel after the demise of his owner. She shares her town house of dogs with the love of her life, people’s attorney Chester Dare who is currently defending an innocent grounds-man accused of the death of a fellow worker from “The Peaceable Kingdom”.

With a shocking second death, that of Uncle Tommy Covington and the more important loss of his famous barbeque sauce recipe it’s upto Garnet to sniff out the truth. But she’s up against a tight time schedule, a hurricane is battering the coast, sink holes are randomly appearing and everyone’s being told to evacuate. Plus she’s concerned about BFF Allison and her relationship with Sheriff Lance Dawtry, so much so that she seeks help from the completely insane Dr Fritz.

Margaret’s writing will take you to the edges of your literary prowess in what becomes an orchestrated oratory of words matching the Herculean force of the hurricane which pursues the galloping Garnet.

For my audience participation I’m asking readers to think up book titles using the letter G for the picture below.

Here are some fellow challengers for you to visit today.

During the tour we are asking readers to leave comments on blog posts, thank you.