Today we have author Anne Allen joining us. Cathy from the book review team recently read and reviewed Anne’s book Guernsey Retreat, catch up with the review here. http://wp.me/p2Eu3u-61d 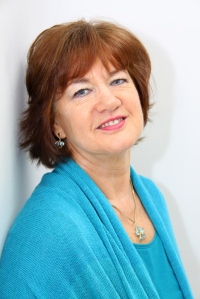 Let’s find out more about Anne and her writing.

I now live in sunny (sometimes!) Teignmouth, by the sea in Devon, but I was born and raised in Rugby. For someone who learnt early on that she loved the sea, this proved to be a problem and I’ve spent my adult life making my home by various coasts.

Not that long – I’m a late starter! I began writing my first novel, Dangerous Waters, about 9 years ago, after thinking about writing for many moons. I’m one of those people who tends to prevaricate when attempting anything new but I finally ran out of excuses at that time – now working part-time and the children had flown the nest – and inspiration floated in. Phew! I was boosted by winning First Prize in a competition run by Prima magazine, who were looking for a true-life story of 500 words. After receiving my prize of £500 in M&S vouchers, I thought writing might prove to be a rewarding second career after semi-retiring from being a psychotherapist.

Which genre do your books belong to?

They fall into several genres; each one has a romantic element and Dangerous Waters and Guernsey Retreat are also mysteries, while Finding Mother is a family drama. As a result of my work as a psychotherapist, I’ve been fascinated by relationship issues and these figure largely in my work. And I love buried secrets and mysteries. ☺

Cathy from the book review team recently reviewed Guernsey Retreat. Is this the first book you’ve set on the Channel Island of Guernsey?

No, all my books are set on the island. When I wrote Dangerous Waters it was my homage to the place where I had lived for many happy years and where I left behind a son and numerous friends. I didn’t set out to write a series even with Finding Mother, but by the time I wrote Guernsey Retreat I realised that was what I was doing. The series is called The Guernsey Novels which says it all! Each book is a standalone story, but linked by characters and places. Readers have commented on the fact that characters from one book pop up in another and they enjoy discovering what has happened to them in the intervening years.

Tell us a bit about Malcolm Roget from Guernsey Retreat.

He is an older man, about 70, who was brought up by a single mother, Betty, and learnt young that you could be successful if you worked hard enough. Brought up in Canada, he became a wealthy man from running his own hotel group, but didn’t allow himself a private life, apart from when he met Susan Canning. They had a passionate time together when he worked for a while in London, but he returned to Canada without knowing Susan was pregnant. Meeting his daughter late in life proves to be a turning point for him, coinciding as it does with his decision to set up a natural health centre and retreat in Guernsey, his mother’s original home.

Who is Louisa Canning?

Louisa is the child of Susan and Malcolm. Her mother never married and all Louisa knew about her father was his name. She lives in London and works as a hospital physiotherapist but is feeling stressed by her job and unhappy after the abrupt end of a relationship. It is at this point that her mother dies tragically and Louisa has to embark on a journey of discovery, in more ways than one.

Tell us a bit about Dangerous Waters, the first book in the Guernsey series.

The story focuses on Jeanne Le Page who left Guernsey at 16 after a tragic family accident. She now returns reluctantly following the death of her beloved grandmother. Jeanne, reeling from that loss and the end of a long-term relationship, only plans to stay long enough to sell the cottage she has inherited. However, the cottage holds a secret going back to World War II when Guernsey was occupied and she is drawn into learning more. Jeanne also meets up with old school friends and begins to see that it might be better to stay after all. Another mystery surrounds the tragedy which claimed the lives of her family and left her injured and suffering from traumatic amnesia. Back on the island hazy, frightening memories begin to surface and Jeanne has no choice but to face her demons and re-live the awful events of that long-ago night. As the truth is finally revealed her life is, once again, in danger…

What is the second book, Finding Mother, about?

This story follows Nicole’s search for her birth mother after her marriage hits the rocks and she needs to find out who ‘she really is’. Adopted by Jersey parents, Nicole has enjoyed a comfortable upbringing and, after university, met Tom Oxford when they were both working in radio in Bristol. They married and their careers took off in television, becoming the proverbial media ‘golden couple’. But when Tom’s unfaithful, Nicole realises it’s time for things to change and she wants to find her ‘real’ mother. Her search takes her from England to Spain, where her parents have retired, to Jersey and finally Guernsey. It’s here that she finds a family riddled with its own secrets and Nicole becomes a catalyst for change for them all.

My fourth book in the series, The Family Divided. The story concerns a local family, the Batistes, who have been split since Edmund Batiste was killed during the German Occupation, amidst allegations of collaborating with the enemy. Edmund’s grandson, Andy, wants to clear his grandfather’s name and restore his own father’s rightful inheritance. In this he is helped by Charlotte Townsend, an English friend of Louisa and who appeared in Finding Mother. Charlotte, a recently divorced publisher and fledgling writer, is drawn to Andy and only too willing to undertake research on his behalf. So again we have romance, mystery and family drama as threads throughout the book. It’s due to be published in spring 2015.

The best place is my website – http://www.anneallen.co.uk Here you can read the first chapters of all of my books, watch the book trailers, dip into my blog or the About Me page. I’m always happy to hear from readers and there’s a contact form on the site.