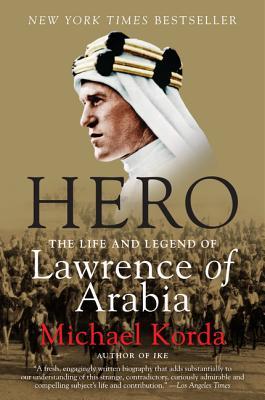 Much has been written about Laurence of Arabia, to say nothing about his own book, The Seven Pillars of Wisdom. The iconic figure of the 20th Century. The film about him was the block buster in the 1960’s and still played today. The book Hero by Michael Korda gives a much more human picture of the man and the epic stories of how he tried to bring peace to the. Middle East after the time of the Ottoman Empire. An insight into the military and political management of world affairs.  Very readable.

The story of an epic life on a grand scale, Michael Korda’s Hero is a gripping, in-depth biography of the extraordinary, mysterious, and dynamic Englishman still famous the world over as “Lawrence of Arabia.” An Oxford scholar and archaeologist sent to Cairo as a young intelligence officer in 1916, Lawrence was a born leader, utterly fearless and seemingly impervious to pain and fatigue. A bold and ruthless warrior, he was the virtual inventor of modern insurgency and guerrilla warfare; a writer of genius who alternately sought and fled the limelight. Korda digs deeper than anyone before him to expose the flesh-and-blood man and his contradictory nature—farsighted visionary; diplomat and kingmaker; shy, sensitive, and private man; genius military strategist; arguably the first modern “media celebrity” . . . and one of its first victims. Hero is the magisterial story of one of the most unique and fascinating figures of modern times—the arch-hero whose life was, at once, a triumph and a sacrifice.