Today’s team review is from Judith, she blogs here https://readandreview2016.wordpress.com/

Judith has been reading What Haunts Me by Margaret Millmore 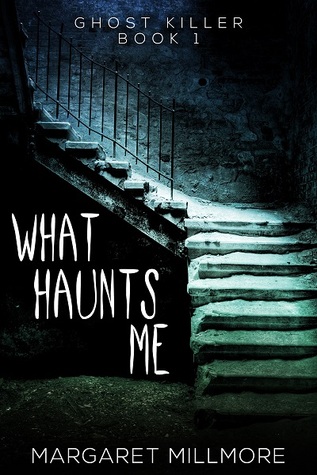 * Title: What Haunts Me
* Published: 2015 (originally published 2014)
* Author: Margaret Millmore
* Started: Friday 27th May 2016
* Finished: Wednesday 1st June 2016
What Haunts Me is as a supernatural thriller following the life of George Sinclair, a pretty ordinary guy, when he discovers that he has a pretty extraordinary gift. He can see and kill ghosts – ghosts that plague the living (literally). The sequel to What Haunts Me is due to be published in this summer.
As you can see, I finished What Haunts Me rather quickly. The chapters were short, which was particularly noticeable because I read the book on my Kindle iPhone App. This is a mere observation though, as I read a lot of classic novels, so I’m used to much longer novels.
When I read the synopsis for What Haunts Me on the RBRT Booklist, I felt pulled towards this book. I’ve been longing to read more paranormal and horror fiction, so this seemed perfect.
I really liked Millmore’s ideas surrounding the paranormal. The notion that ghosts can either be benevolent or malevolent, and are each linked to a living human intrigued me. Also, I think the ghosts’ ability to have a physical, negative impact on their victims – from a common cold, to pushing them towards suicide – was well-explored. I liked Vokkel, the antagonist, who seems to be obsessed with power and control over demonic forces. Coupled with his eerie house and creepy back-story, Vokkel ticked all the boxes of a conventional Gothic character.  On the whole, Millmore expressed a lot of creative ideas about the paranormal, which were enjoyable, and I didn’t mind the direction the plot went in.
However, I thought that the paranormal elements of the story were quite tame. The ghosts seemed passive – even the more malevolent ones – and so I didn’t find the book frightening like I originally thought I would. Similarly, I thought that simply poking the ghosts out of existence was a rather anti-climactic way of vanquishing the undead.
For me, the issue with What Haunts Me was that it contained numerous typos and lengthy and unnecessary descriptions of every character, however minor. I prefer minimal description; my imagination will do the rest. I also thought that the heavy use of obscure fashion references, after the narrator’s self-professed lack of expertise in this area, took away opportunities to develop the horror side of the tale.
Nonetheless, I enjoyed reading What Haunts Me, as the “raw” story underneath some of the technical let-downs was still interesting and engaging. If you like elements of mystery and the paranormal, I would recommend that you read this book.
*Star Rating: 3/5 Stars
What Haunts Me is available to buy as an e-book or paperback from Amazon.co.uk and Amazon.com

Babus has been reading What Haunts Me by Margaret Millmore 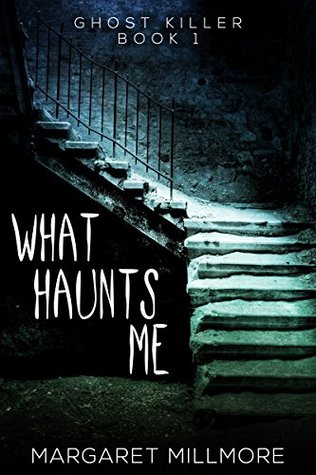 My review of What Haunts Me by Margaret Millmore.

This first of a series, paranormal thriller introduces us to a world where ghosts haunt the living by plaguing them and a breed of people, known as ghost killers, have the special ability to see and kill such ghosts.

George Sinclair is an average man with a job and a mortgage, but after a bout of flu he starts seeing ghosts and discovers he can banish them. George takes a tour of the supernatural to find out more about ghosts and his ability and soon learns he’s not alone but he is unique in the strength of his abilities.

I really enjoyed this ghost story, which grounded the supernatural in the everyday as it introduced us to George, Justine, Billy and a host of characters that made this an engaging read for me.

The thriller comes to a climax as our protagonists face the evil Dr Vokkel, who is responsible for a host of dark deeds over the years affecting both George and Billys family history. I liked this aspect of the thriller too as the background story of the characters added another edge and grounded the paranormal element further.

This type of paranormal/horror read is something I look for frequently but don’t often find, it’s scary and stretches your imagination without drastically changing the world as we know it. I look forward to the next one.

Today’s Team review is from Shelley, she blogs at http://shelleywilsonauthor.com/

Shelley has been reading What Haunts Me by Margaret Millmore

George recovers from the flu but finds that he is now able to see the ghosts that haunt people and make them ill. He discovers that he has a skill for killing these creatures and healing the sick person that was being haunted. He is aptly called the ghost killer. As the book progresses, we unearth that this skill has been present since George was a child but he had repressed the memories – until now.

I love the hook in the opening paragraph of this book – ‘Have you ever had one of those dreams that haunted you in your waking hours? Those surreal movies of the subconscious, playing out in your head while you sleep, so detailed and vivid that when you woke, you couldn’t be sure if it was just a dream or a long lost memory…’

The idea of a ghost killer who can harm (and be harmed) by ghostly apparitions is promising, unfortunately, for me, What Haunts Me fell a bit flat after that opening page. I couldn’t connect to George at all and was only able to see him as dull and boring. I did like Billy as her character was fun and feisty.

The story is told from George’s point of view and reads like a diary at times which made it difficult for me to bond with the character. I felt there were far too many sentences starting with ‘I’ -I told him/I couldn’t tell/I rounded/I had six weeks.

For the first eight chapters, there were only four lines of dialogue and this huge bulk of prose caused me to struggle when reading. I kept putting it down and turning to something else. It would benefit the novel greatly, and help move the story forward if the characters spoke. There are numerous situations where dialogue would have built a clearer picture of George, but a lengthy paragraph was used instead, for example; ‘That’s why I wasn’t surprised when my boss called me into his office. He went straight to the point…what was wrong with me? Knowing that the real answer wasn’t appropriate, I told him I had personal issues…’

Great idea for a story as I love paranormal books but What Haunts Me wasn’t the engaging read I had hoped it would be. Far too much telling rather showing.

I received a copy of this book as part of Rosie Amber’s Book Review Team in exchange for an honest review.