I live in a traditional quarryman’s cottage on the edges of a village in Snowdonia in North Wales, halfway between Conwy Castle and the romantic island of Anglesey. I lived and worked in London for several years, so I certainly appreciate the peace and quiet! It’s a very traditional village with one or two outrageous characters, and many an intriguing story to tell…

All my life! I was first inspired by Rosemary Sutcliffe and wrote my first rip-roaring historical (set in Saxon times) at the age of ten, and never looked back. It’s taken me a long time to be actually published and begin to be the writer I want to be. It’s been a long learning curve, and I still feel I’m at the beginning, but I feel that it’s vital to the making of a long-term career as a writer.

I love cosies (I’m squeamish) and historical mysteries. I love Miss Marple, who is still my comfort reading, Sara Waters and Elizabeth Peters’ Amelia Peabody murder mysteries set in Victorian Egypt starting with ‘The Crocodile on the Sandbank’ – may Amelia wield her trusty umbrella against cads and rascalians forever! Some of my favourite classics are Wilkie Collins and Dickens’ ‘Bleak House’ – Inspector Bucket is still my favourite detective.

Tell us where and when Eden’s Garden is set.

The story of Eden’s Garden moves between Cornwall and Wales, with a touch of London in between. It’s a timeshift, with two parallel stories taking place in contemporary and Victorian times.

Can you introduce us to Carys?

Carys is the heroine of the modern story. When we first meet her, she is in her thirties and at a crossroads in her life. She returns to her home village to look after her mother as she recovers from a fall, and finds herself becoming a historical sleuth to solve a mystery from the past. The story she uncovers challenges her own choices, and changes her future forever.

What is Plas Eden, who did she know there?

Plas Eden is a rambling old house on the outskirts of a village in southern Snowdonia. It is the ancestral home of the Meredith family and holds many memories, not least a collection of mysterious statues in its overgrown grounds that set Carys off on her journey of discovery into the past. As a child, Carys had been drawn into Plas Eden and the lives of the Merediths after a family tragedy. As she returns, she meets up again with her teenage sweetheart, David Meredith, who is trying to save the estate. But Plas Eden is haunted by past secrets, ones that threaten to destroy everything Carys and David hold dear….

Now tell us about Ann, please

Ann is the heroine of the Victorian strand of the mystery. We first meet her on Westminster Bridge, a young woman wracked with grief and guilt, who is has lost everything and feels she has nothing to live for. At the last minute, instead of throwing herself in the river, she makes her way to the nearby Meredith Charity Hospital, where her story becomes intertwined with that of Plas Eden and the Meredith family.

What is Carys looking for as she follows Ann’s trail?

Carys and David travel to Cornwall to try and uncover the story behind the mysterious statues, hoping to find a way of saving Plas Eden. As they begin to uncover the past, they are drawn into an increasingly terrifying story of love and betrayal, of redemption and the enduring power of female friendship.

I’m writing my next historical mystery, this time set in Devon and London in the years between ‘Eden’s Garden’ and ‘We That are Left’, just before the First World War. It has a rambling old house, greed, betrayal and love – and maybe even a brick-wielding suffragette or two….

Today we have a review from Book Review Team Member Elizabeth, she blogs at http://lizannelloyd.wordpress.com/ 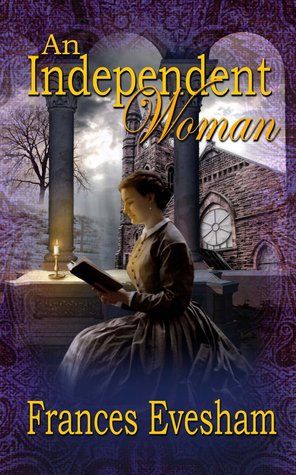 An Independent Woman by Frances Evesham

From the first few lines of, “An Independent Woman,” I knew that I would enjoy this book. The scene of a poor area of London is set, the clothing is of the Victorian era and Philomena, the heroine has our sympathy as she is already threatened by an evil foe.

The fast moving plot involves Philomena’s need to escape. Disguising herself and taking only a tiny portrait of an unknown woman, she boards one of the open-topped railway carriages bound for a new life in Bristol. But there is a dramatic change of circumstances when the train crashes in the Berkshire countryside. Philomena finds herself in the upstairs, downstairs world of Lord Thatcham, tempted by the hint of passion but convinced that she must escape once again.

The tortured soul of Hugh, Lord Thatcham is complex yet believable. His feelings of guilt and duty are at odds with his need for love and his interest in, “modern,” technology. Philomena also has a dark secret which she believes denies her any chance of happiness. Yet they share a common enemy who could unite them or dash their hopes for ever.

This beautifully composed story contains all the ingredients for a successful historical romance, including separation and misunderstanding. The minor characters are warm or evil and the historical details accurate and particularly interesting. A thoroughly good read.

With the letter “N” I bring you the second book on the challenge written by author Jean Fullerton. Jean has recently appeared on the blog as a guest author http://wp.me/p2Eu3u-j0 and I will be hosting her as part of The Very British Blog Tour 2013.http://wp.me/p2Eu3u-dQ During the challenge we are asking everyone to leave a comment as part of the big blog push, thanks.

Here is some inside information from Jean about todays book “No Cure for Love”;

No Cure for Love. Is set in Victorian East London and features the lovely red-haired Irish heroine Ellen O’Casey. With a voice and face of an angel Ellen attracts Doctor Robert Munroe who falls for her the moment he sees her. Unfortunately, she also catches the eye of Danny Donavan, the head a criminal gang whose motives aren’t so honourable. As Ellen and Robert fall in love they must battle not only the social gulf that divides them but also the deadly danger of crossing Danny Donavan.

You’ll fall in love with Ellen O’Casey, an Irish Catholic immigrant, is struggling to support her ailing mother, her teenage daughter and herself. Washing other people’s laundry in the day, and singing in bawdy pubs at night, Ellen is determined to make a better life for her family by saving enough for the passage to New York where the rest of her extended family have already emigrated. But Danny Donovan, a local gangster and the landlord of the pubs where Ellen sings, intends to make her his mistress. A widow in her late 20s, Ellen has refused to let another man in her life, least of all the brutish Danny, whose advances she doggedly resists.

Jean Fullerton is a native Londoner and was born in the East End within the sound of Bow Bells. Until she was five her family lived in Wapping, alongside the Thames, and then moved to Stepney. She is a trained nurse and teaches healthcare and nursing. Her husband is a Church of England vicar, and his parish includes the site of the 2012 Olympic Games. She has three daughters.

Buy No Cure for Love http://www.amazon.co.uk/No-Cure-for-Love-ebook/dp/B003NUSBEG/ref=pd_sim_kinc_2

P.S. Our thoughts and prayers go out to the families of those touched by the Boston Marathon bombs.