Terry has been reading The Speech by Andrew Smith 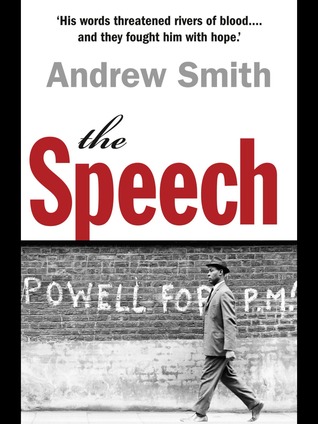 THE SPEECH by Andrew Smith

The Speech is a novel of separate yet associated stories, cleverly put together: the first is the period in Enoch Powell’s life leading up to and shortly after his infamous ‘Rivers of Blood’ speech, and the second is the story of Frank, an art student, and his friend Nelson, a Jamaican immigrant, who is wrongly accused of a serious crime.

I found the portrayal of Enoch Powell compelling indeed; the author shows neither an overly negative nor positive view of him, but (it seemed to me) a realistic one, and one that showed the extent of his research.  I liked the way this book showed Powell’s insecurities and obsession with the Empire, with England and old traditions; there’s a lovely passage (in inner dialogue) about his automatic and unconditional respect for authority, in which he relates a memory from his childhood.  The seven year old Powell has taken off his school cap in a room in Caernarfon Castle.  When his father asks why, he replies that it is because this is where the first Prince of Wales was born.

Whatever you think about Powell’s views on the immigration problem, as relevant now as it ever was (incidentally, three cheers for the Sikh protestor’s placard: ‘We’re here because you were there’), this book certainly shows all sides, though of course Powell’s ideas were sometimes taken out of context, his name revered by the thugs who later became known as skinheads and neo-Nazis, and passed down by many who have probably never read his speeches and think that all he ever said was ‘send ’em packing’.  I thought he was as idealistic as any of the liberals he berated; reading this, I wondered if the man himself had any idea of the trouble his words might unleash.

As for Frank’s story, it’s clear Andrew Smith has first hand knowledge of the era; I enjoyed considering how societal attitudes have changed so much in just fifty years, while in other ways the problems then are still with us; the book is interesting for this aspect alone.  Mr Smith’s 1960s art students are so realistic, affected and impressed with themselves (I loved Denise the Militant, whose favourite insult appeared to be ‘bourgeois’).  Frank is not altogether likeable (this isn’t a criticism; I don’t think he’s meant to be), being feckless and immature, but the character is well drawn.  Nelson and his aunt were a delight, I so warmed to them, and could have wept for all Nelson went through.

From a technical point of view I wasn’t sure about this book at first, as the opening few chapters seemed wordy for the sake of being wordy, and I thought it was going to take a bit of ploughing through, but it soon settled down and by about 10% I was enjoying it.  Other minor irritations were a few slip-ups that should have been picked up by the editor (American English such as ‘horseback riding’ and ‘different than’, and incorrect punctuation), and a feature I’ve seen in many self- and independently published books set in the 50s and 60s: the over-inclusion of song titles, artistes, TV programmes and brand names of the time (‘she tasted of Gibbs peppermint toothpaste’) that seem to be included just to push the nostalgia buttons of the reader.  Mr Smith’s writing is good enough to present the atmosphere of the era without over-egging the pudding, if you like!   If a book set in the late 60s is written well, you can almost hear Otis and Hendrix playing in the background, you don’t need to mention the chart titles of the day every time the radio is switched on.

The 1966 ending, with the amendment to the Race Relations bill, makes a fine summing up of the whole situation, especially the observations of Hogg and Macleod.  The final chapter shows how far the country has come, and makes some attitudes of the 1960s seem as unbelievable as the atrocities that occurred in the southern US in the first half of the last century.  It’s a good book.  I enjoyed it.  If you have an interest in the subject matter, I am sure you will, too ~ and isn’t the cover excellent?