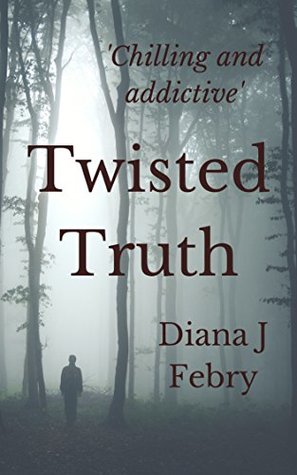 Cathy has been reading Twisted Truth by Diana J Febry

Megan Roach is a journalist working with her University photographer friend, Rob, for a local newspaper. Not quite what Megan had envisaged as a career. Their present brief is to show care homes in a good light after the recent scandals. While packing up the equipment, Megan’s attention is caught by an elderly man in a wheelchair. She was amazed when the man jumped out of the wheelchair and shut the door, before handing her a package, saying he had evidence of a murder. Megan was skeptical but the man was insistent, and Megan was still searching for her big break. What could she lose by taking a look at the package?

DCI Peter Hatherall is very reluctantly attending a pagan wedding with his wife and partner DI Fiona Williams. The description of the wedding is fabulous and, judging by the one I watched at Glastonbury Abbey, it’s pretty spot on and although there wasn’t a maypole it was a sight to behold. Peter is approached by the groom, who’s worried because two of the guests who apparently possess some disturbing information, hadn’t made it to the wedding. He believes they are in terrible danger and wants Peter to investigate.

As Megan tries to make sense of the contents of the package, she begins asking questions about the evidence contained in the included notes, not realising she is at risk of losing her job…even her life. The deeper she digs the more she loses her grip on reality and the more her life spirals out of control.

Megan is portrayed very well as an unreliable character, her credibility is compromised fairly quickly. An incident outside a shop when an elderly man is being tormented by a group of youths seems to be the catalyst for Megan’s instability. She sometimes appears quite unappealing and quite often I found myself rolling my eyes at her questionable behaviour, sometimes wanting to give her a good shake. Given her upbringing it was understandable up to a point, she is quite vulnerable and seems very immature. I did find myself sympathising with her a little more as the narrative progresses.

Meanwhile Peter and Fiona are investing reports of a runaway, as well as the disappearance of Dick’s friends. The plot is well constructed and told from various perspectives, tying the threads up neatly in the end. I enjoyed learning more about Peter and Fiona’s personal circumstances. Both are having personal issues, and Fiona’s final decision really surprised me. Nevertheless, I enjoyed catching up with them both and look forward to more.