Welcome to my weekly roundup of my year long challenge to do one Good deed a day for a year. This challenge began back in April 2013 and is still going strong. My inspiration came from reading “A Year of Doing Good” by Judith O’Reilly. Here is what I’ve been up to this week. 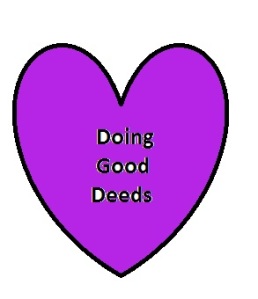 January 26th – A Good Deed completed and a Good Deed received all in one today. I was invited to write a post for a new feature on Words Unlimited called High Five, where guests talk about their top 5 in any subject. I’ve just sent off a draft all about books I’ve recently read, and of course they get a mention here on the blog. Good Deeds all around.

January 27th – My morning helping out at school today, Good Deed ticked off.

January 28th – Whilst at work this morning a friendly young man came in to the office. He represented an animal feed merchant. He explained he’d been to agricultural college, graduated,this was his first job and he was driving around his patch looking for new business. I gave him the contact details of the relevant farm partners rather that brushing him off because he was one of the lucky ones and had a job, so I wanted to give him a chance.

January 29th – Met a friend for coffee and treated us both. Stopped off at the charity shops on the way home and bought some books.

January 30th – Here in the UK some supermarkets use a system for the trolleys (carts) where you need a £1 coin or similar sized token to release the trolley for use. As I was returning my trolley to the trolley bay I was able to help an elderly gentlemen release his £1 coin which was stuck in the lock, a quick tweak and the coin was released.

Good Deeds received had an amazing write up from John Howell on his blog as a thank you for hosting his new book promotion “My GLR“. Here is a link to his post http://wp.me/p2Qoij-11p

January 31st – The February Issue of Fleet Life is online today with my page of book reviews. This months books and authors are; “The Omega Paradox” by Richard Kellier, “Nine Lives” by Terry Tyler, “The Hitman’s Guide to Housecleaning” by Hallgrimur Helgason, “The New Granny’s Survival Guide” by Gransnet and “Twelve Days” by Jade Reyner. Go to www.fleetlife.org.uk, click on the online directory and find my reviews on page 26.

February 1st – I can’t believe it’s February already. I have 14 confirmed letters booked in my A to Z Challenge and 2 more that may get booked by the end of the weekend. Many of the harder letters are left to fill. If you know someone who may have a book I could use please get them to contact me. Today I’ve accepted 3 more books to read and review. I shall start on them once I’ve finished my little self indulgent re-read of Twilight.

Today I met up with a lady that I last saw 6 months ago. At that time she had just had a grand-daughter born, who was very ill in hospital undergoing major surgery after just a few days of being born. I didn’t know if the baby had survived, and it was a difficult question to ask, but I’m glad I did. The baby survived.

The February edition of Fleet Life is now available and this month you can find my reviews on page 26. My paper edition hasn’t arrived yet, so here is a shot from the online version. Go to www.fleetlife.org.uk, then click on the online directory and click to page 26 where you can read the magazine in a larger format. 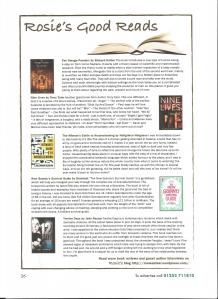 Featured books for February are below with links to my review posts from the blog where you will find further links for purchasing options;

The Hitman’s Guide to House Cleaning by Hallgrimur Helgason http://wp.me/p2Eu3u-4l4

Twelve Days is a contemporary romance which deals with domestic violence. All the action takes place in just 12 days. It suits the pace of the book by revolving around Christmas, a fast paced time of year when people often throw caution to the wind. I was appalled at the violent situation that Elise remained in, but I realise that there are many women in the world who do suffer from domestic violence. This book reaches out to them and if it gives just one person the strength to break free then the author has done a good job. Throughout the book I was undecided about the character Vaughn, I wasn’t sure if he showed signs of obsessive dominance which Elise was trying to escape from with Dale. By the end he had won me around and a cliff hanger ending left me wanting to know what happened to him. I’m glad there is a sequel for us to read the rest of the story of the relationship between the couple. This book does contain adult content.

Find a copy of this book here on Amazon.co.uk or Amazon.com

View all my reviews at Goodreads

Welcome to Christmas week of my Good Deeds weekly challenge. My own challenge to do one Good Deed a day based on the book by Judith O’Reilly called “A Year of Doing Good” 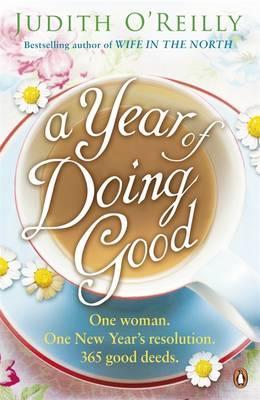 Find your own copy here from Amazon.co.uk or Amazon.com

December 22nd – I’m really excited, Judith O’Reilly the author of “A Year of Doing Good” has been good enough to agree to be our gust author on the blog. Today she has sent me her interview answers and I have scheduled her interview post for Sunday 5th January. The first Sunday in January to coincide with my weekly Good Deeds round-up. On with my own Good deeds, today I’ve finished 2 books and written reviews which I’ve posted on Goodreads and Amazon, they will both appear here on the blog in January.

December 23rd – Donated some money to a local Odiham charity that were collecting whilst I visited the Newlyns Farm Shop it was really busy with everyone collecting their fresh turkeys, but I had time to spread some calm amongst the busy workers while I picked up the paperwork for my work session.

December 24th – Have invited a friend over for a cup of tea, we swopped gifts and caught up on all the news. Remembered how hard others work at Christmas and gave the postman a Christmas present.

December 25th – We are hosting Christmas lunch for my In-Laws today. Good deeds received; Had some wonderful gifts and in return brought happiness to others with my own gifts.

December 26th – Boxing Day here in the UK, a quiet family day, but I’ve made biscuits to take out with us as we go to tea with the In-Laws. Good deeds received; My mother-in-law who doesn’t do computers or social media asked me all about my writing, my blog and my monthly reviews in Fleet Life, she was really interested and supportive, an avid reader herself she surprised me with her enthusiasm. Had a scary moment when she admitted she’d read my book whilst staying with our Aunt (who had it on Kindle) hope she didn’t recognise Sophie’s mother-in-law!

December 27th – Today I posted a book review on Goodreads and Amazon for a dear friend Jade Reyner, who I’ve met over the internet. Jade took part in our Romancing September tour http://wp.me/p2Eu3u-2rE and recently took part in the successful “Read Tuesday” event run by Chris McMullen. I’ll be featuring Jades book “Twelve Days” on a post in January. Good Deeds received; Had a lovely e-mail from Jade thanking me for her review.

December 28th – Good Deeds received; Was thrilled to be contacted by author Mac Black who had seen his book “Please Call me Derek” on my Wish List Collection, he has offered to send me a copy which I will lovingly read and review for you all here on the blog. Had a lovely comment about my “Good Read Collections” from another author, I’m glad people are enjoying them. My oldest child is off for a sleepover tonight so I’m sending along bags of popcorn for their movie session.

Wow! I can’t believe I still managed to find Good Deeds during Christmas week, I had worried that opportunities would not show themselves this week, but I’m glad they did.

Day 19 on the Romancing September across the world tour meets author Jade Reyner. First we’ll talk to Jade here on the blog and then in a few hours you can catch up with her again at Stephanie’s blog where they will be looking at writing romance in today’s society.

Let’s find out more about Jade;

Find a copy of this book here on Amazon.co.uk or Amazon.com
I’d like to say and big Thank you to Jade for being our guest on the blog today and Good luck with the new book. Catch up with Stephanie’s half of meeting Jade here http://stephanie-hurt.com/