Today’s guest on the mystery book tour is Tracy Lawson and her book Counteract. 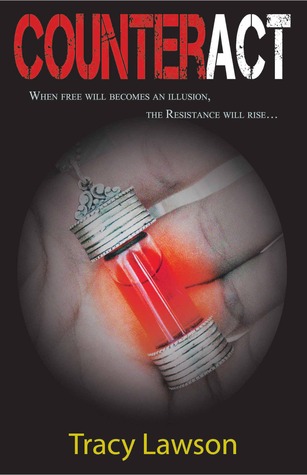 I grew up in Cincinnati, then we moved around a bit after college, but spent most of our daughter’s growing up years in Columbus, Ohio. Currently I live with my husband and daughter in Dallas, Texas.

Almost since I learned to read. My first book was historical nonfiction, and took me 20 years to research and complete—I didn’t work on it steadily, and I probably could’ve completed the research in five years if I’d had the internet when I started! The finished book, Fips, Bots, Doggeries, and More, Explorations of Henry Rogers’ 1838 Journal of Travel from Southwestern Ohio to New York City, was published in 2012. Shortly after I secured a publishing contract for that book, I began to work on my current book, Counteract.

Counteract is a dystopian thriller. The teen-age protagonists uncover a conspiracy surrounding a purported terrorist attack against the United States, and join forces to expose the truth about a corrupt government agency which threatens to usurp even the president’s powers.

Tell us about The Office of Civilian Safety and Defense.

The OCSD was created in 2019, in response to rampant terrorism against the United States. Over time, the OCSD has absorbed all the other safety and security agencies, and instituted a comprehensive program of Civilian Restrictions, meant to protect the population from harm. The OCSD constantly reminds the people that the Civilian Restrictions are “a small price to pay for safety.”

Can you tell us about your two main characters?

Careen survived a terrorist’s bomb when she was a kid, and now with the threat of a chemical weapons attacks literally hanging over everyone’s head, she willingly takes the antidote offered by the government but is unprepared for the side effects. Her erratic behavior attracts the attention of a young law enforcement officer, who mistakenly pegs her as a dissident and follows her, hoping she’ll make contact with a known resistance group. On the day of the attack, he meets Careen, who just might be the girl of his dreams, and tries to save her by sharing his last dose with her, even though doing so could potentially hasten his own death.

Tommy, recuperating from injuries sustained in a recent auto accident, is unaware that there’s a link between the accident that killed his parents, and the current threat of an impending chemical weapons attack. The antidote plagues him with hallucinations of tragedy and loss, and sends him spiraling into despair. When he discovers that working out before he takes his dose helps him feel more like himself, he defies the OCSD rules.

What is the new threat to the country?

The OCSD announces that terrorists have released latent toxins into the atmosphere that can be activated at any time and used to poison the population.

How do the authorities believe they will counteract the threat? The OCSD assures the public that they’ve been aware of the mounting threat, and have developed a Counteractive System of Defense antidote to the poison, which will must be taken daily.

Counteract is the first book in The Resistance Series. The second, Resist, is nearly completed, and I’ve begun work on Revolt, the third instalment in Tommy and Careen’s story.

Find a copy of the book here;