Beacon by Chess Desalls
My rating: 4 of 5 stars

Beacon is book #2 of the Lantern series of young adult fantasy short stories. I read book #1 as part of the Darkness Echoes Halloween anthology in 2015.

Havenbrim is a medieval style village in Llum. Serah Kettel has been thrown out of her family home, and seeks an apprenticeship with Master Machin, a celestial mechanic and glazier. His home is filled with strange lanterns which glow with magical light. Serah’s job is to dust the lanterns and to work out a puzzle: just how does the light get in?

With the help of moonlight, Serah discovers herself inside a globe in a far off land. This place is very strange for Serah and she’s not sure this is where her future lies. She uses a magical doorway to return home, but much time has passed since she left.

Book #1 left many questions about Master Machin, some were answered here, although, with the length of the story, there are plenty more questions left unsolved. For myself I wanted a deeper storyline to sink my teeth into and more character explanation, however I am aware that I am reading a book intended for the YA market.

When Serah’s life in Havenbrim becomes unbearable, she accepts an apprenticeship with a celestial mechanic and glazier. Her master assigns her the task of opening a globe framed in copper. But the glass and seal are unbreakable. The solution to the puzzle traps Serah inside the globe, and transports her to a world where she longs for home.

Chess Desalls is the author of the YA time travel series, The Call to Search Everywhen. She’s a longtime reader of fantasy and sci-fi novels, particularly classics and young adult fiction. Her nonfiction writing has led to academic and industry publications. She’s also a contributing editor for her local writing club’s monthly newsletter. The California Writers Club, South Bay branch, has awarded two of Chess’ stories first place for best short fiction. When she’s not reading or writing, she enjoys traveling and trying to stay in tune on her flute.

Barb has been reading Isabella’s Airman by Sofia Grey 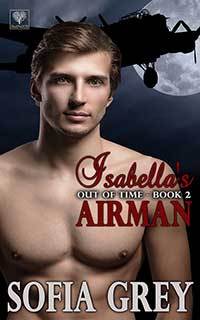 When my daughter was in high school, any debate team reference to Hitler resulted in an automatic Goodwin disqualification. Back in 1990, American author and writer Mike Goodwin proposed what has come to be known as Goodwin’s Law: “As an online discussion grows longer, the probability of a comparison involving Nazis or Hitler approaches 1.” In other words, the longer a discussion continues, the greater likelihood that someone will invoke the specter of Hitler and/or World War II.

For those who write time travel or speculative fiction, the corollary has come to be know as Goodwin’s Law of Time Travel.

The first rule of time travel is that any and all modifications made to the timeline result in Hitler winning World War II. Run over a hippy in 1968? Hitler wins.
— colonel_green, ScansDaily

Of course, there are other approaches. One theory says that time travelers actually can’t affect history. For example, let’s say you have an inventor so horrified by the millions killed during the Holocaust and WWII that he or she devotes their life to inventing a time machine. S/he goes back to kill Hitler, but is unsuccessful (this is, after all, a man who survived fifty-plus assassination attempts). Or perhaps our inventor somehow kills Hitler before his rise to power, the Holocaust never happens, and thus s/he would have no reason to invent the time machine in the first place. But if the time machine doesn’t lead to Hitler’s death, then the Holocaust does happen and the inventor creates the time machine and then…

Other theories say that Adolf Hitler is just one man, himself barely in control of the sweep of history, and that events would have happened along the same lines no matter who rose to control in Germany. Or perhaps the results would have been even worse from our historical 20-20 hindsight— Stalin conquers Germany and keeps going, Mussolini becomes more powerful, Franco remains in power for forty years. (Oh, wait…)

Then there is the issue of how much science do you want in your science fiction? Approaches can vary:

3. Hard: “Let me tell you about my theory, which integrates every piece of quantum physics from Einstein to Hawking.”

4. Super Hard: “There is no such thing as time travel.”

My review: 4 stars out of 5 for Isabella’s Airman by Sofia Grey

As she mentioned in her guest post here, Sofia Grey has to consider paradoxes when writing her time travel series, Out of Time. In the soft time-travel future world she creates, survivors of the horrors of a third World War create a future that promises safety from the war-prone emotions of the past. But the cost is high.

It was a stark reminder of why our society existed in the form it did today. The Internet no longer existed. Information was controlled. Emotions were recognized to be dangerous, and love was the most powerful and destructive of them all.

Procreation occurs in test tubes. Students are sent as time-travellers to learn from the past, but are strictly forbidden to interfere in any way that might affect the timeline. Enforcement and protection of the timeline is the job of ghardians, elite soldiers who are trained to do whatever it takes to prevent any actions that might affect the future in any way. But when time-travel student Isabella arrives in World War II England, she realizes that the young man she’s fallen in love with will be killed. If she tries to prevent his death, she faces capture and prison from the ghardians. Even worse, any disruption of the timeline could result in unimaginable future consequences.

In a time-travel romance with soft science, there are a few obvious choices for conflict resolution. Does the traveller realize that in a clash of time periods and cultures, their love is already doomed, and the couple must go their separate ways? (Snort. This is a romance, folks. Get real) Perhaps there’s a Love-Conquers-All approach with a Brigadoon-like exception that reunites the lovers? Does the time-traveller pull off a sleight of hand where the lover appears to die, only to be rescued and whisked off to another time without disruption of the timeline? Or maybe there is a lot of science and thriller stuff where people risk all to be together? Oh, I really want to tell you the answer, because Sofia Grey’s creative solution takes most of the above resolutions, turns them upside down, and pulls off a winner. But that would risk spoilers, right?

So let me just say that I thought Isabella’s Airman is an excellently written and delivered example of a time-travel romance. We get to see Isabella grow from a timid girl to a woman willing to risk all to be with her lover. The action moves quickly between time periods, supplying both a satisfying amount of historical detail and creative world building for the future. I enjoyed the first book in the series, Lila’s Wolf, but I think this one is both more fun and—perhaps because of the time period—easier for me to relate to. It stands alone easily, but if you read it, you’ll want to go back for the first book anyway. And, if you’re like me, you won’t be able to wait for the next book in the series because the clues are all there for the ghardians and the time-travelers to take a serious look at just what happened in World War III.