Noelle has been reading The Warlords by Richard Denham 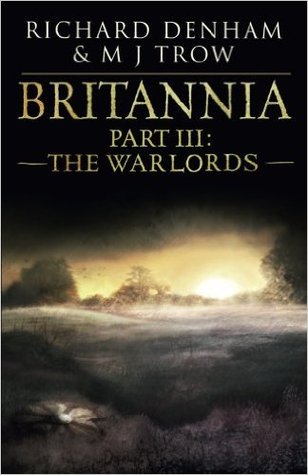 This is the third in the historical series Britannia, which explores the time of Roman rule in what is now Great Britain (England, Scotland and Wales). Authored by Richard Denham and M.J. Trow, The Warlords is a fitting conclusion to a compelling trilogy. I have read the previous two books, and while I recommend them all, I strongly suggest they be read in sequence. The series is built around four so-called Heroes of the Wall, who are young men in the first volume (see my reviews of both the first and second books on this blog site). Only two now survive and they are well past their prime, their weakening with age mirroring that of Roman Britannia. The time frame of the series is compressed somewhat in order to follow them into the waning era of Roman rule in its far-flung province.

Elsewhere in Europe, Rome is also in its death throes, following the bloody end of Magnus Maximus, the Roman Emperor who began his reign in Britannia.

One of two remaining Heroes, Justinus Coelius, is now the General of the Roman forces in Britannia, and he and the depleted and increasingly fractious Roman army face a myriad of threats from the wild tribes of the north and others from across the German Sea. The other Hero is Vitalis Celatius, who has become a Christian convert and a weaver of baskets with reeds from the Thames. His goal is to live a quiet life away from conflict, but his religion and reputation draw him back into political events.

In addition to Justinus and Vitalis, this book is richly populated by an array of conniving and greedy characters, some real and some fictional, better drawn and even more interesting than those in the previous two volumes. Stilicho, a historical figure, is a ruthless and loyal toady of the Emperor Theodosius and is tasked with taking the head of Magnus Maximus to Londinium (London) to teach the barbarians a lesson in Roman strength and superiority. Stilicho runs into two immoveable objects on his arrival: the unscrupulous but competent Vicarius, who oversees Rome’s business in the city, and Scipio of the Black Knives, a gang of thieves and murderers. His mother Honoria is Vicarius’ mistress.

Another historical character is Pelagius, a roving Christian evangelist, whose religion is tolerant of traditional gods and emphasizes free will. He has an enemy in the Bishop Londinium and a reluctant follower in Vitalis.

When Stilicho is recalled upon Theodosius’ death, a sequence of men declare themselves Caesar and rally various of the Army’s legions to rule the province and beyond, only to be overthrown one by one. In the meantime, Niall of the Nine Hostages, High King of Tara, is raising and plundering the western and southwestern coasts of the province. To the north, the Voltadini, a barbarian tribe and allies of the Romans who have for centuries repelled attacks from the Picts, the Scots, the Irish and the Saxons, face a deathly threat. The son of their Queen, who is the lover of Justinus, seeks to overthrow both her and the Romans by secret pacts with these same tribes.

Who can contain Niall? Can the Queen rally the Voltadini to maintain the northern regions from invasion? Who will ultimately control the legions? The book’s characters are wound within these gradually unravelling story threads and despite my knowledge of what really happened historically, the complex story kept me reading with enthusiasm. The authors have clearly taken some liberties with the history of Britannia in spinning this saga, but then again, there is much of that history that is unknown.

I recommend this third book and indeed, the whole series, and hope to visit some of the sites mentioned in the book when I next travel to England.

The Warlords by Richard Denham
My rating: 4 of 5 stars

The Warlords is book #3 in the Britannia series of historical fiction set in Roman Britain. I do suggest reading these books in order to understand the full storyline and to get a grip on all the characters.

In this book Magnus Maximus the usurper who declared himself Caesar, then Augustus and who then marched against the Roman Emperor Theodosius, is dead. Killed in battle. The Isle of Britannia is a thorn in the Roman side, troublesome and supporting threats to the throne. Theodosius intends to make a lasting impression on the people of Britannia and stamp out the uprisings.

He sends the severed head of Maximus to Britannia with the intention of having it paraded around the province. However inhabitants of the thorn in his side, send him back the head of his own man in retaliation. So instead Theodosius sends a non nonsense soldier Stilicho to teach these barbarians a lesson or two in obedience.

In Londinium few can be trusted, the underworld of the city is run by Scipio of the Black Knives, whose mother sleeps with the Vicarius who oversees Rome’s business. Everyone is out for themselves and through it all shines greed.

With Rome’s hold beginning to crumble the wolves are braying at the coastlines, the Saxons, Hiberni, Scotti, and more all want a piece of the land. Justinus Coelius, Dux Britannorum patrols the edges of Rome. He must deal with idiots like the Count of the Saxon Shore and hardened warriors like Niall Mugmedon, High King of Tara.

When the Emperor dies, Stilicho is recalled and Britannia is left open to the marauding hoards, can a Hero of the Wall still be a Hero against such odds? And who will be left to tell the children the tales of Britannia?

This is a grand finale to the series, there are a lot of characters and many have several names and titles which increase the cast vastly and can make for a confusing read at times. I read a paperback version and there is a glossary of Roman terms at the back and a brief map of Britannia which I would have loved to have more details on. The last quarter of the book was superb with a tense set of events to draw the series to an end.