Poppies are still being sold all over and I donated more money to the appeal this afternoon.

November 3rd – My morning at school helping children learn to read. Day 3 of the mystery Tour, The Singing Bowl by Roy Dimond the epic journey around the world that a monk takes to find a lost book. http://wp.me/p2Eu3u-5LU

November 4th – Day 4 of the Mystery book tour and it The Ties That Bind by E.L. Lindley. http://wp.me/p2Eu3u-5QS Sorting out a pile of book reviews for the December issues of the magazines I write for.

November 5th –  A Single Step by Georgia Rose is our Day 5 book on the mystery tour. http://wp.me/p2Eu3u-5UJ Spent all day inside in the warm reading like a demon to get another book read and reviewed.

November 6th – Off shopping, saw our oldest child still at the bus stop, picked her up and made a detour to college, spotted the bus broken down in town, picked up a second child on route. Did the embarrassing parent thing, wound down the window to tell other students that the bus had broken down, was only allowed to do this once!  Day 6 on the mystery tour Terry Tyler and Nobody’s Fault. http://wp.me/p2Eu3u-5ST

November 8th – It’s the turn of Geoffrey West today on the Mystery November tour with his book Doppelganger http://wp.me/p2Eu3u-5LK

This week my good deeds have all been around the book tour as I’ve been really busy promoting it, but of course I’m always reading books in the back ground for authors.

Welcome to Day 4 of the Mystery November book tour. Today our guest is E.L. Lindley with her book The Ties That Bind. 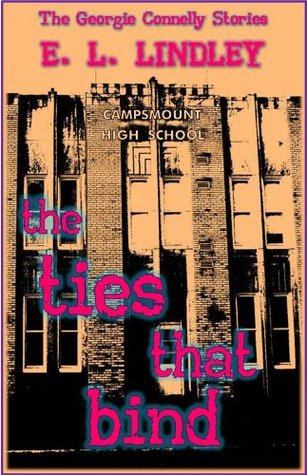 My home town is Sheffield which is in South Yorkshire. It’s a lovely area because it’s a vibrant city but we’re also surrounded by beautiful countryside.

When did you first write a mystery?

The first novel I wrote was Business As Usual which is the first story in the Georgie Connelly series. Since then, I’ve written three more in the series and I’m currently working on numberfive.

As a reader, mysteries are my favourite genre so I suppose it’s only natural that I would head in that direction as a writer. I love reading all mysteries from the more gritty Jack Reacher series to the wacky Stephanie Plum novels. I think my favourites are probably somewhere inthe middle; a serious core but peppered with light-hearted humour and romance. In my own novels, I tend to tackle serious subjects by way of the crimes that are being committed but offset that with Georgie Connelly’s fun approach and the cast of characters who are her support system.

Tell us about the idea which sparked The Georgie Connelly series.

I think I just write the books I want to read. I wanted to create a female protagonist who is tough and tenacious but soften her with humour to make her more appealing. Georgie Connelly has lots of annoying characteristics – she’s bull-headed, arrogant and constantly puts her foot in it but she is loyal to a fault with a big heart.

What is Georgie’s job?

Georgie is a documentary filmmaker who has won awards for her hard-hitting exposes. She is a Brit but based in LA because of the film industry being concentrated there. As a result of her work as a filmmaker, she often becomes embroiled with people who are the victims, or indeed perpetrators, of wrongdoing and she is not the kind of person who can look the other way. Consequently she finds herself fighting crime on a regular basis.

What is the mystery element of this book?

In The Ties That Bind, Georgie is reunited with her mother, Marilyn. The two of them have been estranged for a number of years and find themselves thrown together in less than favourable circumstances when Marilyn is accused of murder. Marilyn is an exasperating character and great fun to write but, for all her faults, Georgie is convinced of her mother’s innocence and sets about trying to exonerate her.

Why is Georgie looking into Public Schools?

Georgie finds herself working undercover in a public school because her investigation leads her into the world of gangs. In order to gain some insight into what’s going on, she needs to have contact with some of the young people who part of gang culture. Georgie started her working life as a media teacher in an inner-city London comprehensive school so the idea isn’tas far-fetched as it may seem.

Who else helps Georgie solve the crimes in this book?

In the previous book, Business As Usual, Georgie met James Finn who, was assigned by her boss and friend Eric Delaney, to act as a sort of bodyguard as she has a tendency to ruffle a lot of feathers with her often controversial documentaries. The two have become firm friends and there’s definitely a spark of romance which The Ties That Bind builds upon. James has formed a private investigative partnership with his old friend Julie Sellars and the two of them help Georgie with her investigation. Eric is married to Georgie’s best friend Callie and they are a constant support to Georgie as is her friend Sean Collins, who is something of a maverick police detective. These characters are fixtures in all of the Georgie Connelly stories.

Tell us a little about the other books in the series.

Business As Usual introduces the character of Georgie Connelly and, in this debut novel, Georgie’s expose on gentlemen’s clubs brings her into contact with a dangerous Russian gangster who, it turns out, is involved in people trafficking and forcing young women into the sex industry. At the same time, Georgie finds herself being stalked by a white supremacist who was the subject of one of her previous documentaries.

The third in the series, after The Ties That Bind, is The Righteous Path which involves a religious cult and sees Georgie going undercover in order to try and locate missing girl who may have been recruited by the cult. The cult leader is a charismatic man called Jed Munro and it’s uncertain whether he genuinely believes his own ideology or is simply a ruthless manipulator.

The fourth book in the series is False Allegiance and in this one Georgie finds herself investigating a college sorority where some of the members may be responsible for the death of a young woman.

Although the books are sequential and we see the relationships between the characters developing throughout the series, they can also be read as standalone stories.

If readers want find out more they can visit my website at ellindley.weebly.com where there‘s lots of information about all of my books and I also have a blog.

The Ties That Bind will be free on Kindle until November 7th. Get a copy now.

Today is the letter G on the A to Z Challenge. My books today are, The Georgie Connelly Series by E. L. Lindley. Genre: Crime

Georgie Connelly is pure wish fulfilment and we could all use a friend just like her. Georgie is the fearless heroine of a series of novels, who manages to find trouble wherever she goes. She’s loudmouthed, infuriating and irresponsible but she has a heart as big as a house. The series begins when Georgie, a documentary film maker based in LA, finds herself the target of one of her subjects. Her best friends, Callie and Eric Delaney, recruit ex-Marine James Finn to protect Georgie and fireworks follow. All of the novels feature James, Callie and Eric as well as other recurring characters including Georgie’s man-eating mother.

Business Us Usual is; A thrilling crime novel, introducing Georgie Connelly a feisty protagonist along with a cast of loyal and likeable characters who surround her. If you enjoy novels that have heart and humour why not give it a try.

The Ties that Bind Us; After a harrowing couple of months, Georgie and James Finn prepare to take their relationship to the next level, only to find their plans scuppered by the
arrival of Georgie’s estranged mother, Marilyn, who is accused of murdering her husband. Suddenly Georgie has to deal with issues that resonate back to her troubled childhood.

The Righteous Path; In between projects and waiting for James to return from the Gulf, Georgie is excited when her old friend Sean Collins asks her for help in finding a missing
girl. Little do they realise where their digging will lead and before too long they are caught up in the sinister world of a religious cult.

False Allegiance; When a grieving mother asks Georgie to look into the death of her daughter, she finds herself becoming entangled with a college fraternity and its sister sorority. As she strips away the tradition and elitism, she uncovers a dark core which suggests that the death of the young woman may not have been an accident.

The stories are in the following order although they can also be enjoyed as standalone reads. Business As Usual, The Ties That Bind, The Righteous Path, False Allegiance.

Find out more at

You can catch up with more of E. L Lindley’s books by clicking over to a previous post when we discussed some of her other books and writing. http://wp.me/p2Eu3u-2mY

Here are some randomly chosen links to other bloggers taking on the challenge, please find time to visit them too.

During the challenge we are encouraging people to comment on as many blogs as possible, all supportive comments are greatly appreciated, thanks.