Noelle has been reading The Owl Goddess by Jenny Twist 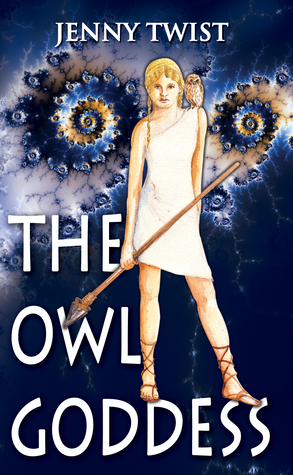 I really enjoy books that are aimed at a YA audience, and I did enjoy this one. The Owl Goddess by Jenny Twist is based on the claim of Erich von Dänekin that extraterrestrials or “ancient astronauts” visited Earth and influenced early human culture and is set in the prehistoric Mesolithic age. It’s a first contact tale, which begins with the crash of the spaceship Atlantis on a planet populated by an intelligent but primitive people. The sign of their Goddess appears in the sky, marking the crash site – a giant Sacred Mushroom.

The difference in this story is that the aliens aboard the spaceship are a group of Greek gods and goddesses: the teenage Athena, her father Zeus, Ares, Demeter, Artemis, Apollo, Hades and Poseidon, to name a few. Following the crash, which they all survive, they set up camp and very quickly recognize that this planet is exactly like their home. The gods become quite delightfully human in this author’s creation, having many of the foibles we associate with their myths, and assume the jobs of their mythic descriptions. Hestia, for example, the virgin goddess of the hearth, architecture and domesticity, takes on the job of camp cook, while Hera, the wife of Zeus, is portrayed as self-centered and shrewish.

The book is told from the points of view of Athena, and the boy, Prometheus, who not surprisingly is the keeper of the fire for his primitive tribe, the Titans. Prometheus is in love with Pandora, who has become The Mother of the tribe and assumed sacred powers. The Mother decides to see the aliens and she and the tribe climb the mountain to reach their camp.

What follows is an interesting story of assimilation and learning, as the two groups try to understand each other. There is plenty of tension: the love triangle of Athena, Prometheus, and Pandora; the hatred of Prometheus for his brother, who becomes Pandora’s husband; the challenge of Atlas to Zeus’ leadership. The author also cleverly weaves in some of the legends: Athena adopts a baby owl, and the primitive tribe worships her as a wise goddess; Zeus banishes Atlas and his followers across the Mediterranean to Africa.

This is a sweet story and an easy read, humorous with quirky characters. The only drawback for me was some of the dialogue – a bit simple. The book should be a great hit with youngsters who are into Greek mythology from the Rick Riordan books, which are more violent and complex.

Jessie has been reading The Owl Goddess by Jenny Twist

You know me, I hate to reveal too much about a book in a review. I promise, no big spoilers but I’ve got to tell you something this time…

… the owl goddess, her name is Athena and she lives on a spaceship.

Talk about food for thought!

Let’s just say that when I start out a book and “regular” people are named Zeus and Athena, Artemis and Aphrodite, there are expectations and ideas that pop into my head. When those “regular” people met some other mostly regular but more stone-age-ish other people and they have names like Atlas and Prometheus and Pandora… More ideas occur.

As it turns out, I meet a character named Pandora, I just hold my breath the whole time waiting for the you-know-what to hit the fan, because you know it has to… it’s Pandora! You don’t even need any extra foreshadowing when you have a name like that!

For the first part of the book I wasn’t a very good reader. Instead of just putting my faith in the story and letting it flow, I couldn’t stop wondering what the author was up to and guessing how what I knew about those names was going to fit in.

Then there was a turning point about halfway through the book. Suddenly both the characters and I had a grasp on what was going on and I finally settled in and enjoyed the unfolding of the tale.

Would I recommend it? The author did a really nice job crafting her story around Greek mythology yet writing something totally new. I think this will not only be a hit with young adults who already know and love Greek mythology but also an excellent way to introduce kids, who would rather read about space travel than where olive trees came from, to the classic tales.