Today’s Team Review is from Cathy she blogs here http://betweenthelinesbookblog.com

Cathy has been reading The Memory Box by Eva Lesko Natiello 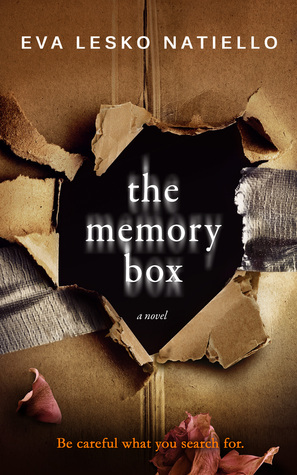 Caroline Thompson, a suburban mother of two, keeps as much distance as she can from the town’s gossipmongers, and their insatiable need to dig into everyone’s lives. The latest craze is googling everyone to see what they can uncover to add fuel to their nasty gossip. They could only find three hits for Caroline, which initially is reassuring, but gives Caroline the idea to google her maiden name, which no-one in town knows. As she scrolls through hit after hit, what she finds terrifies her. How can she not remember such momentous and life changing episodes from her past.

What follows are Caroline’s attempts to piece together the explosive information Google has thrown up. The more she uncovers, the worse it gets. It appears her nice, comfortable life is built on a foundation of shocking lies and deception. As Caroline becomes ever more confused and panic stricken, her behaviour becomes more and more outlandish. I honestly couldn’t see where this was going or how it could be resolved. There’s plenty of suspense and drama from Caroline’s point of view but I couldn’t understand why nobody was picking up on her weird behaviour and the fact she’s unravelling before their eyes. Or why Caroline wasn’t confiding in her husband, her best friend, someone who could offer her support.

All becomes clear in part two! A completely unexpected and unusual twist … and then some, with another surprise development at the very end. This is a very imaginative and unconventional telling of a story within a story. A couple of little niggles for me were over description in parts and Caroline’s thought processes which became quite repetitive, but could, of course, be intentional to show how she is gradually becoming more deeply disturbed. That said, it’s a very unpredictable read with many layers and an obsessive protagonist who has to be in control.