Today’s Team review comes from Cathy, she blogs at http://betweenthelinesbookblog.wordpress.com/ 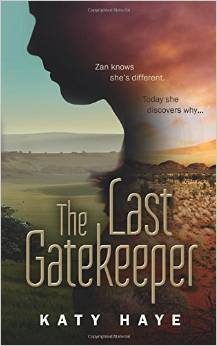 Up until the day of her 17th birthday, Zanzibar MacKenzie lead a very sheltered life. She always knew she was different, home schooled, no electrical appliances whatsoever in her life or environment and isolated by her EHS. Just how different, she was about to find out. While spending time with her only friend, Em, who lives nearby, and Em’s boyfriend at the beach, Zan thinks she spots a stranger on the cliff watching them.

Returning to the house, she finds her father slumped in the hallway, her mother is nowhere to be found and the diamond ring she always wears at the bottom of a glass of water. As Zan reaches for the ring she hears her mother’s voice, giving her instructions. Before she can begin to comprehend what’s happening there’s a knock at the door. It was the man from the clifftop. Thanriel, a talvarrine from the planet Talvar. An angel with wings. An alien. Zan’s life is about to change forever as Thanriel explains who he is and why he is there.

Zan is the last of the Gatekeepers, her special powers are needed to save Earth from being destroyed by the Queen of the planet Fane. After much persuasion, her abrasive cousin Cal, another of the fae on earth, agrees to help her.

The Last Gatekeeper is a very imaginative and well constructed young adult fantasy. The alien world of Fane is described in enough detail to give a really good visual image. Zan is an engaging protagonist, quite unlike your average teen, with her electrical hypersensitivity and way of life. Along with the typical teenage issues, she has a great deal more to contend with; getting to grips with her newly discovered powers, her immediate attraction to Thanriel and the impossibly huge responsibility which has been placed on her shoulders. I like Katy Haye’s writing style and the Northumbrian setting. Strong characters, a well paced narrative and a good plot, the never-ending fight between good and evil, make this a very enjoyable read.

Today’s team review comes from Amanda, she blogs at https://ajbookreviewclub.wordpress.com/

I loved all the characters they are were very strong and very likeable
Zan the main character she the heroine she had alway felt she was different to others but why ?
I liked zan character she was smart and feisty can she works out why she feel different it takes her by surprise you could to read to see why she got a few problems can she find a way to solve them you will be pull into her character you will be there helping her out
This story just pull you into the plot Zan a Gatekeeper Her task is to close the three gates between the Fane’s world and earth.How can she do this ?

This story has
it all a lovely love story ,suspense ,fantasy and it packed with action I did find it very dark in places but i enjoy that it hooked me
I liked all the Angels and fairies in the other world Fane what at places i want to go there can Zan help the two warring worlds it the good v the bad i sometimes found Zan very inexperienced and trying to cope with so many challenges in her life she just like most teenagers do i felt she founded her powers hard to cope with her attraction to Thanriel was so lovely to read about I was hooked from the first to the last page i can not wait for the next book what next for them

This month we have book reviews in http://www.fleetlife.org.uk

Go to the online magazine, click on online directory and once loaded find the reviews on page 28

This month’s featured books are;

Both Sides Of Love by Kimberley Wenzler

The Lives Between Us by Theresa Rizzo

Lovers At Heart by Melissa Foster

The Last Gatekeeper is a fantasy read and tops the high end of the YA for me because of its storyline for teenager Zanzibar Mackenzie. This is the first book in The Chronicles Of Fane series.

Zan suffers from electric hypersensitivity as does her mother, it means they can have no electrical items in their house, no internet , no phone, no TV. Zan is home-schooled because she couldn’t cope with all the electrical interference associated with a school. At home they live a primitive life and Zan feels like a freak.

A freak until the day she discovers that she is a half-alien and her hypersensitivity can be dulled by the presence of super-hunk Thanriel a Talvarrine. His appearance follows the disappearance of her Mum and the discovery of her Dad lost in a deep sleep which no-one can wake him from.

With Than’s help Zan seeks out Cal and is told she is a gatekeeper between the human and Fane world and that she must stop the Queen of the Fane from destroying the human world.

I liked the fact this book was set in Britain, much of the YA fantasy book series I read are set in the US, this is a refreshing change. For lovers of YA fantasy books this book ticks all the boxes.

This review is based on a free copy of the book give to me by the author.

Zanzibar MacKenzie knows she’s a freak. She has EHS – electrical hypersensitivity – which leaves her trying to live a Stone Age life in the twenty-first century: no internet, no phone, no point really. Then Thanriel knocks on her door and the dull summer holiday becomes maybe too exciting. Zan discovers fairies and angels are real beings from other planets, she herself is half alien, and the future of life on Earth rests on her shoulders.

This book is the first of the Chronicles of Fane series.

Katy Haye spends as much time as possible in either her own or someone else’s imaginary worlds. She has a fearsome green tea habit, a partiality for dark chocolate brazils and a fascination with the science of storytelling.

When not lost in a good book, Katy may be found on her allotment growing veg and keeping hens in order to maximise her chances of survival in the event of a zombie apocalypse or similar catastrophe (you never know!).

Connect on Twitter @katyhaye, or make friends on Goodreads at https://www.goodreads.com/autfYhor/show/9848245.Katy_Haye