Terry has been reading The Blue Ridge Project by Neil Rochford 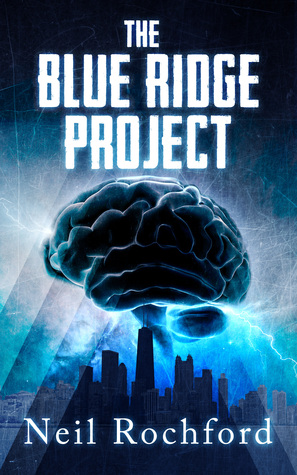 This is a complicated and cleverly thought out thriller with three main strands that come together smoothly; it’s a jolly good plot, original and unusual. Murders, evil politicians, psychosis, mind control, dark secrets from the past—it’s got the lot. I wasn’t quite sure at first, it just seemed like another forgettable crime suspense thriller type book, fairly readable but not that memorable, but then at about 25% it suddenly got more interesting, and I started to get seriously into it about half way through. There’s a well placed ‘before’ section that explains how all the situations you read about first have come about; the planning gets a tick from me.

Two things made this book not work as well as it might have done, for me. One was the characterisation, or lack of it. Most of the characters remained one dimensional, their dialogue mostly used as a vehicle for the plot, and with little insight into their heads. The exception to this is main character Robert, who I could ‘see’ a bit more than the others (and psycho Lyons was good, too), but female cop Andrea was a man in all but name (why is it that women writers can usually write men better than male writers can write women?). Because there were so many characters and they didn’t walk out of the page and into my imagination, I sometimes got confused with who each one was. Even when the plot is the star of the show, if you don’t connect with the characters you don’t care what happens to them. I’d also be tempted to trim the cast list down.

My other minor complaint is that I thought the book could do with final proofread, and another edit. Example: ‘She pushed open a door to reveal a spacious lounge. There were two comfortable-looking brown-leather chairs across from each other with a small, round, wooden table held up by a wooden sphere, instead of legs, that had been carved and polished with great care, and a round, flat piece of wood for the table top.’ This would have been much more succinctly written as ‘In the spacious lounge stood two comfortable looking brown leather chairs separated by a small, immaculately carved and polished, wooden table.’ You don’t need to know that the doctor pushed open the door before she and Andrea walked into the room (let it be presumed), and maybe we don’t need to know about the plinth, either.   This one just jumped out at me but there were a few similar. I only put this in detail because at the end of the book the author has expressed the desire for feedback via reviews.

Having said all this, I would still recommend The Blue Ridge Project, and the author has a good handle on suspense; it kept me interested and I wasn’t tempted to abandon or skip read. I gather this is Rochford’s first novel; I am sure he will iron out his debut novelist dodgy bits, as most do.

Suzanne has been reading The Blue Ridge Project by Neil Rochford

Blurb
Detective Andrea Nox is investigating a bizarre and violent murder-suicide with far-reaching consequences, both for Beacon City and the people who run it. But all she has to show for her efforts so far are nonsensical clues and dead ends.
Then, there’s another murder.
Journalist Robert Duncan is visiting home after a personal crisis when the unthinkable happens and he unearths long-kept secrets about his family and his place within it. Before long, he is going back over an old story that implicates powerful people in horrible crimes, drawing him deeper into a dangerous and widespread conspiracy he wishes he had no part in.
Frank Mortimer, disturbed son of a wealthy and influential family, has no interest in conspiracies. He only wants to take part in an experimental program that promises to make him ‘better.’ However, with the shadowy and powerful group known only as The Project pulling the strings behind the program, what he is getting better at could prove disastrous for everyone else, as a dangerous power is being unlocked inside him…
Their paths will converge in murder, intrigue and a clandestine experiment that threatens to change the world itself. Discover the secrets behind The Blue Ridge Project…
My review
First thoughts – I was intrigued by the blurb and as I started reading the book immediately felt different to the usual detective stories.
Characters – In the beginning there are too many characters to keep track of. It keeps you on your toes because you never know which character will play a part or is the next victim. That kept things interesting, but also made it hard to form an attachment to any of the characters.
Style – Part one is present day and then part two switches back to events that happened in the past. This second part is where the story came together for me and where I got a better understanding for the characters.
Final thoughts – Towards the end a lot of things that I had been wondering about were explained (I won’t say too much in case of spoilers). I thought it was cleverly written and I am definitely intrigued enough to continue with the series.
Recommend to – Those who like crime thrillers with a touch of something different.
Rating – 4 / 5 stars
Check out the book for yourself on Amazon UK   Amazon US  or   Goodreads

E.L. has been reading The Blue Ridge Project by Neil Rochford

The Blue Ridge Project by Neil Rochford is a beguiling mix of crime thriller and sci-fi. I found myself enthralled from the very first page and the break neck pace didn’t let up until the last.

Rochford’s success lies in the way he shrouds his story in mystery, leaving his readers compelled to read on in order to find out what might happen next. The story is based in Beacon City which is controlled by the rich and very sordid Hamilton family. From the onset, the mysterious and strangely deserted Regent Hotel seems to be at the centre of much of the action but we don’t find out to what extent until the very end.

Likewise, Rochford throws lots of characters at us in the beginning, almost playing with us as they jockey for centre stage before being discarded and creating yet another layer of mystery. Finally two protagonists emerge from the crowd, in the form of homicide detective, Andrea Nox and freelance investigative journalist, Robert Duncan.

Rochford further demonstrates his hold over both his writing skills and his readers by employing an extremely complex structure. The novel opens with a prologue which is actually set two days before the start of the novel. We are allowed to catch up before Rochford cleverly uses his characters’ memories to take us into the past, thereby providing us with some of the answers to the many questions buzzing around our heads. In parallel running chapters, Andrea relives her past via a conversation with a therapist while Robert unburdens himself in a drunken conversation with a recent acquaintance. For the final section of the novel, we are brought back to the present day in time for the denouement.

I really like the way Rochford presents his characters. There are no perfect heroes just flawed, damaged, not necessarily likeable people, getting by the best they can. Rochford has an excellent eye for detail and brings his characters alive with unusual observations. For example, he describes a lawyer in the book as someone who, “looked like a man who would die in his office rather than retire.”

Andrea Nox is my favourite character, a hard drinking, angry woman who is not averse to drunken one night stands. Her counterpart in the novel, Robert Duncan, is a heavy drinking idealist whose reputation is in tatters as a result of trying to expose a powerful politician as a brutal deviant. Both characters experienced traumatic childhoods which have had far reaching effects on their adult lives.

Andrea and Robert find themselves thrown together as a result of “the project,” a mysterious experiment with mind control. As the two of them get drawn further and further into the murky world surrounding the experimentation, they find themselves questioning their own sanity. Rochford raises the philosophical question of what is real and how do we know our perceptions of events are valid? After all, do people who are insane know they are insane and what is to say that they are?

I really liked The Blue Ridge Project; it is an exciting page turner that also provides the reader with food for thought. The novel ends on a cliff-hanger ready to continue into a sequel and, I for one will definitely be coming back for seconds.