Chris has been reading The Black Orchid by Celine Jeanjean 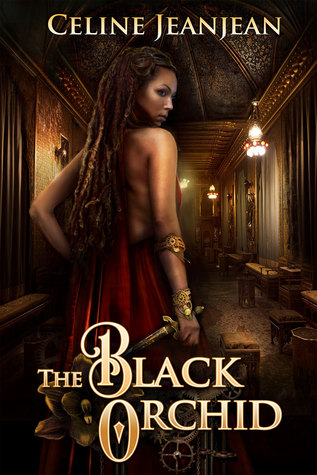 Second in The Viper and The Urchin series, though can easily be read as a standalone, this was steampunk at its best. There was intrigue, adventure, mystery, alchemy, and a dash of romance.

Rory and Longinus are bored living an honest life. But when an old friend of Rory’s from her urchin days turns up exsanguinated, Rory and Longinus set off to investigate, through the poverty and illegality of the Rookery, to the opulence of The Mansion and its inhabitants and visiting diplomats, to the brothels of Bayog. And everything keeps leading back to The Black Orchid…

Wow. The plot had me turning (OK, swiping) the pages as quickly as my reading would allow (I think I forgot to eat dinner at one point. What day of the week is it?). The characterisation, too, was so wonderfully written, with the characters interacting and growing as the book progressed. There was pace and immersive setting and… Just read it – it’s brilliant.

Jessie has been reading The Black Orchid by Celine Jeanjean

Reviewing a sequel is always a little bit challenging. I’ve begun to think of it as advice on if it’s worth it to start reading the first book of the series.

In this case the answer is yes.

You’ve got to start with The Bloodless Assassin (previously title The Viper and the Urchin) where you will meet the assassin that reminds me of Eyore and the street urchin who teams up with him.

And then, for sure, you’ve got to continue on to The Black Orchid.

Hands down my favorite part of these books is the characters. In the first book it was the witty dialogue between the two. In this sequel the focus shifted away from the dialogue (don’t worry it was all still fun and fantastic) and onto some major character development. I won’t spoil anything with details but let’s just say things have changed quite a bit and watching the two main characters adjust to their new position in life is to watch some great writing at work!

Would I recommend it? Yup. Yup. Yup! Just don’t forget you need to start with The Bloodless Assassin to make the story even more enjoyable! And then please keep reading because I think this one might be even better than the first!

Liz has been reading The Black Orchid by Celine Jeanjean

The second adventure of the Viper and the Urchin finds these two disparate characters relocated to the warehouse of Cruikshank, engineer to the Marchioness, no longer an assassin and a pickpocket, but officially employed by the Old Girl, as the Marchioness is affectionately called.  But their services have not been required and they are feeling aimless and redundant when at last they are summoned to investigate a mysterious death by exsanguination in the insalubrious Bayog district of the city of Damsport.

Rory’s knowledge of the criminal underworld of the Rookery make her indispensable but Longinus occupies his time investigating the unexplained shortage of the black silk he needs urgently for his new elegant suit.  A link between these two events is discovered in The Black Orchid, a newly popular brothel.  Rory and Longinus find themselves in great danger again, not just from their enemy but also from threats to their relationship.  As they become estranged, the future looks grim.

Like the first book, The Black Orchid engages readers by the strong, vibrant women who never give up against all odds.  An old relationship between the Marchioness and stunningly beautiful Mizria may be reawakened, Rory seems to becoming closer to Varanguard, Rafe and Longinus continues to send anonymous poems to Lady Martha, daughter of the Old Girl.

Celine Jeanjean has written another thrilling adventure which is hard to put down.  The grubby streets of the city come alive in the fast moving plot and each character has substance and complication.  Alchemy and steam driven vehicles play their part but heroism shines.  In conclusion the scene is set for further adventure involving characters who have come to mean a great deal to their readers.

Today’s Team Review is from Barb, she blogs at http://barbtaub.com/

Barb has been reading The Black Orchid by Celine Jeanjean

As I read The Black Orchid, Book 2 of Celine Jeanjean’s The Viper and the Urchin Series, I was thinking again about those three sliding variants of character development—competence, proactivity, and sympathy. In my review of her first book, The Bloodless Assassin (formerly titled The Viper and the Urchin), I talked about how those markers moved over the course of the book.

It was fascinating to see how they move again in the sequel. The motivating premise of the first book was, as its new title correctly proclaims, the anomaly of a master assassin who is reduced to physical incapacity by the sight of blood. But in this new book, would that be enough to continue moving the action forward? Not a problem! Working brilliantly within a mix of my favorite genres (steampunk/sword & sorcery fantasy), author Celine Jeanjean continues to move those sliders as both urchin Rory and assassin Longinus develop their relationship with each other and with others.

As The Black Orchid opens—to their mutual shock and not a little embarrassment— both Rory and Longinus find themselves in the position of being honestly employed in the service of Damsport’s ruler, the Old Girl. It’s devastating to both.

Longinus—”Damsport’s most elegant assassin”, clotheshorse, and bad poet—is used to stalking his contracted victims to the accompaniment of an internal monologue extolling his brilliant (and brilliantly accessorized) successes. But with legal employment, he’s reduced to stalking incoming shipments to discover the reasons for the shortage of luxury goods such as his trademark black silk (so essential to the Viper’s image you know…). And the elegant lines he formerly composed in praise of his prowess as an assassin are now replaced with love poems sent (anonymously, of course) to the Lady Martha, daughter of the Old Girl. While our sympathy for this new Longinus might be high, his rapidly diminishing competence and proactivity make him seem like an over-age and slightly whiny Harry Potter.

Well-dressed and no longer a scrawny, smelly urchin, gainful employment and regular meals have hit Rory hard as well. For the first time, her life plan of becoming a master swordswoman is tainted by the realization that “the Scarred Woman” she wanted to emulate for years is actively determined to destroy both Longinus personally and her city of Damsport. But Rory slowly realizes that if she’s no longer an urchin—the one thing she was supremely competent at—then she has no idea who or what she is. Like Longinus, the Rory we meet at the beginning of  The Black Orchid is hitting the trifecta of low sympathy, competence, and proactivity.

And the relationship between Rory and Longinus—the one area that could move those sliders up as they reinforce each other’s strengths and compensate for their weaknesses—is crumbling under the weight of respectability.

Luckily for Rory and Longinus, the one person whose sliders are at 100% for competency and proactivity, and near-zero for sympathy—Longinus lifelong enemy and sister Myran—is subtly orchestrating a series of events designed to destroy them. With their enemies a step ahead at every turn, Rory and Longinus both have to step out of their comfortably respectable new life, become proactive, and resurrect the competencies of their old lives to survive.

One of the things I love about Celine Jeanjean’s writing is all the stuff she does NOT say. In keeping faith with Rory and Longinus as narrators, she keeps explanations to a minimum and pays readers the compliment of assuming we’ll get relationships and motivations from actions, instead of from paragraphs of exposition. Instead of congratulating Damsport on having people of color—and especially women—be strong, clever, and brave, the author lets the unfolding story speak for itself. The love of a woman’s life? It can be another woman, one of a different race at that, and that relationship can be publicly acknowledged. The strongest person in town? Again, that can be a woman. The villain? Ditto.

In a particular level of genius, Celine Jeanjean lets us into Rory and Longinus heads, uses their point of view to narrate actions, and lets readers put together the clues that the bemused characters still haven’t understood. In addition, The Black Orchid meets all my remaining criteria for a successful mid-series book:

Five stars? When a book has everything I like—diverse, well-developed and evolving characters, a steampunk setting, and entertaining dialog, what’s not to love?