Today’s team review is from Aidan, he blogs here https://ricketttsblog.wordpress.com/

Aidan has been reading Synthetic Selection by Arda Karaca 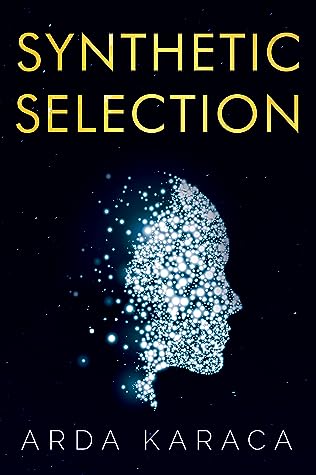 I really like the sound of Synthetic Selection when I first read it’s description on Rosie’s blog. While it did raise some interesting questions, and had some more unique perspectives on different moral themes, I felt the execution was unfortunately clunky in places.

The premise of the book is that humanity has collectively failed, and has made the world almost unliveable for their frail bodies. However, an artificial intelligence called Galileo offers the human race salvation by transferring their minds into synthetic bodies. However, this process alters the way they think, deepening their understanding of the world. This causes a schism in society, between those who want to undergo the process and those who don’t.

The main characters are a pair of lovers, Ari and Lil, who I found to be uninspiring while apart, while very enjoyable when together. Their relationship was one of the highlights of the book for me, as they seemed to bring out the best in each other, and there were a lot more subtleties during that time that was lacking from the rest of the novel. However, I found that while they each had individual quirks, we never got below a surface level with them individually, since the author, Arda Karaca, fell into the trap of ‘telling not showing’.

The best supporting characters were the ones who were directly connected to Ari and Lil, such as Lil’s grandmother Judy. I think this was because they allowed a new perspective into the main characters’ thoughts, while contributing to the story themselves. However, there were many characters introduced, who seemed to have no bearing on the story overall, and were underdeveloped. There were often a few pages dedicated to such a character’s point of view, only for them never to reappear in the book. This was a truly odd decision by the author.

Similarly, the plot had events that I thought were unnecessary and just interrupted the flow of the novel. However, there were not that many of these, and the overall structure was quite good. There was a large and unpredictable twist in the middle of the book that sent the story flying off in a direction I wasn’t expecting at all. The plot facilitated the core themes of the novel nicely, and allowed time for the author to properly develop these. However, the ending did feel a bit rushed, and there were multiple instances of logical inconsistencies. For example, at one point it is stated that children under 15 were rare, yet children constantly came up from this point on.

The lighthearted banter between Ari and Lil was again a highlight, as it added some light to an otherwise bleak story, and restored hope in humanity. However, the rest of the dialogue in the book was quite flat, and rarely distinguished one character from another. This was unfortunate, as good dialogue can buoy a story, but if it’s less well-written it is glaringly obvious.

Overall, I give the book 3.5 out of 7. The story itself was decent, and in some places caused me deep reflection of the world we live in, which I see as the hallmark of good sci-fi. Unfortunately, the language didn’t hold up to this standard. I might recommend this for fans of thoughtful sci-fi, but wouldn’t go much further than that.

Many thanks to Rosie and Arda Karaca for giving me a copy of this book for free.

When billionaire Daniel builds the world’s greatest supercomputer, which calls itself Galileo, the world begins to change. During his first public address, Galileo explains to humanity that the only course of action is for all humans to adopt ‘Synthetic Selection’, a process whereby humans would exchange their outdated forms for a robotic body that would never deteriorate. This causes a division in the world, between those who decide to become ‘superhumans’ and those who wish to retain their human forms and lifestyles.
İn the middle of this division, Ari and Lil fall in love but little do they know how their destinies are going to change the course of humanity, even the universe, after meeting another super being called a wanderer, Al.