Alison has been reading Starlings by Miranda Gold 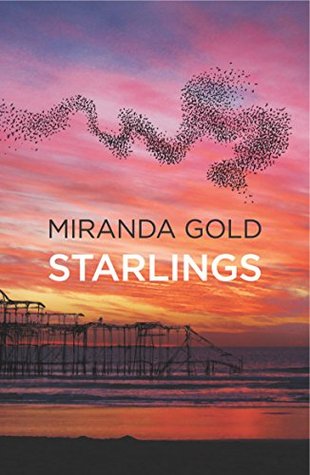 Sometimes book reviews are really hard to write. There were aspects of this book that I absolutely adored. , and the way the author uses her writing to so accurately portray the chaos going on in Sally, the narrator’s, head is so very clever. And it works, for the most part. The repetitions replicate the way we have of going over and over a problem, and give a real rhythm to the prose, and the language is poetic at times. Sometimes I stopped and re-read a sentence, or a whole paragraph, because something was so well-written that I just had to read it again.

The story of Sally, and her troubled relationship with her brother Steven, who she adores, and her guilt and mixed feelings about her parents with who she lives, is interesting and thoughtful. The back story about Sally’s grandparents, who escaped the holocaust, is so well done, drip-fed almost, intriguing and sorrowful and poignant and a real strength of the novel.

But the strength of really good poetry is that it’s concise. Every single word matters. It requires precision. And that’s what I felt was somewhat lacking here. Sometimes an image, a feeling, the description of a moment, was taken too far, stretched too thinly, repeated too much. And reading then became a chore rather than a pleasure.

It’s not an easy novel to read. It requires patience and the prose does take a bit of getting used to. It is too dense in places, the story lost under the prose, rather than shown through it. I wish an editor had used a restraining hand, and allowed the really good bits to shine the way they deserve.

So do I recommend it? Yes. If only because there are moments in the writing that are truly brilliant, and it’s worth it for that. And for the passages that sweep over you with their rhythm, when it is like reading really fantastic poetry. And because Sally, is, at times, compelling and her story is a powerful one.

Struggling to bear the legacy of her grandparents’ experience of the Holocaust and her mother’s desperate fragility, Sally seeks to reconnect with her brother Steven. Once close, the siblings have become distant since Steven left London, separating himself from their shared history.

Starlings reaches back through three generations of inherited trauma, exploring how the impact of untold stories ricochets down the years, threatening to destabilize a coherent sense of self. Having always looked through the eyes of ghosts she cannot appease, Sally comes to accept that -Before- may be somewhere we can never truly leave behind and -After- simply the place we must try to make our home.