I have been a member of Rosie Amber’s Book Review Team (#RBRT) for five and a half years, now.  I first ‘met’ Rosie online when looking for reviews for my own early books, and through her some of the other bloggers who later became part of the team.

I admit to being wary of making the commitment when I joined the review team, but I’m so glad I did; Rosie has created something so positive for the independently published world (the team deals mainly with the self-published or those published by independents), and I am proud to be a part of it.  When I joined, I decided to start my own book review blog – I don’t profess to be a ‘proper’ book blogger as I’m primarily a writer; I don’t take submissions and use it only for reviewing for Rosie and my own reading choices, but it’s something I enjoy doing.

There are two main reasons why I’m so glad I joined the team, equally important.  The first is the discovery of some truly excellent books; now and again, you find a real gem, that you want to shout about; so often these are books that are hidden away on Amazon and you would have never discovered, had the author not submitted.  Here are a few that made me feel this way (link takes you to my review):

The second reason I love being a part of #RBRT is that some of us have become real life friends, too, enjoying several meet-ups. Here’s to six more years of Rosie Amber’s Book Review Team!

Terry has been reading Singularity Syndrome by Susan Kuchinskas 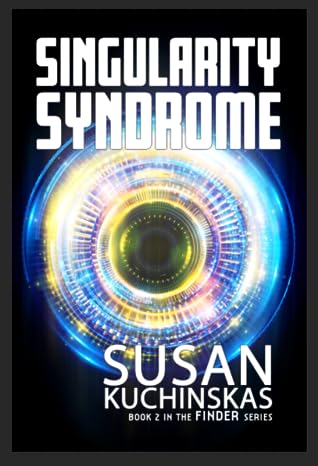 ‘Finder’ is back, complete with dog/bird chimera The Parrott, and human/baboon Altima, as he uncovers a venture capitalist’s plan to rule the world by AI, making humans compliant by means of a nutritional energy drink. The idea that AI could eventually overtake humans is one I’ve read a fair bit about, also that its integration with humans (Numans, in this book) could be the next stage in our evolution. I find this hellish in the extreme, and it makes me glad I was born when I was.

We don’t know exactly when the book is set, but I imagine it is probably in about a hundred years’ time; Finder mentions helicopters being used in the wars of ‘the last century’. The state of the planet (the Big Change) is revealed to be not only down to the slow deterioration of climate change, but another disaster. I enjoyed the plot, but what I liked reading about most about is Finder himself, a most engaging character, and the world-building elements. Although the story paints a grim picture of human life in the future, it is not without a certain light touch that I wouldn’t exactly call humour; it’s more pathos mixed with astute observations, and off-the-wall characters.

In this book we find out a bit more about Finder’s life when he was younger, including his real name; I like the way his character is slowly building, and I’d love to read more about what has happened between now and the time in which the book is set – more background.

Having read the notes at the back, I know Ms Kuchinskas is well-informed about her subject matter, and this is evident; it is imaginative, clever and extremely well-written.  I’d definitely recommend it to fans of ‘cli-fi’, but you should read Chimera Catalyst first. I liked this more than the first book, and hope there will be more!

All humans have a complex colony of microorganisms living in our guts. This microbiome influences our health, our thinking and our moods. If you can change someone’s microbiome, can you control their thoughts?

That’s the plan of Thom Elliott, a power-mad tech titan who wants to create a new world order where humanity is ruled by Sekai, the most powerful artificial intelligence ever created. His weapon is Glorp, a nutritional energy drink beloved by the tech community that secretly includes genetically engineered microbes to transform human gut flora.

Finder is a brilliant detective who hates people. He might agree with Elliott that an AI could do a better job of running the world. But when Finder’s own microbiome is contaminated with Elliott’s brew, it’s up to him and his chimera sidekicks to stop him.