Robbie has been reading Secrets Of The Galapagos by Sharon Marchisello 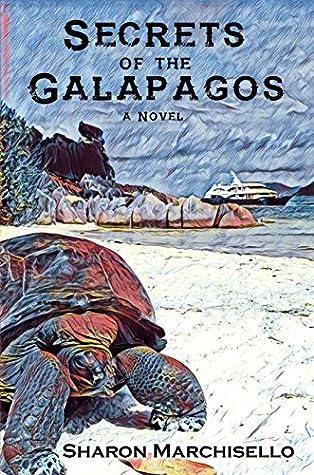 This is an entertaining murder mystery with a large dollop of romance. The story is set on a cruise ship which is travelling around the idyllic islands of the Galapogos. The author weaves some lovely and interesting information about these island, the conservation programmes they have in place as well as the amazing wildlife that is found there, into the story which I really enjoyed.

Giovanna has recently had some bad experiences. She lost all the money raised from investors to build her dream non-profit veterinary clinic to a clever con artist and, as a result, her fiancee and business partner, Tim, has broken off their engagement. To make matters even worse, her best friend, Connie, is married to the conman, and helped entice her into his trap. Giovanna’s youthful looking grandmother, Michelle, talks her into going on a cruise to help her recover from these losses and move on with her life. Giavanna decides on the Galapagos as a destination because she has learned, via Facebook, that this is where Connie and the conman have gone and she hopes to somehow get an opportunity to confront him and get the stolen money back.

Giovanna is in for some more hard knocks. While snorkeling with her new friend, Laurel, the pair get separated from the group and Giovanna is nearly left behind by the boat. Laurel disappears and no-one will acknowledge it except for Michelle and a few other guests who notice she is missing. Other unusual things are also happening on board the ship: Michelle gets hit over the head in the ship’s library, a memory stick with photographs of animals on it belonging to Laurel goes missing and one of the guides turns up dead in the swimming pool. Giavanna is determined to get to the bottom of it all and also to confront the conman if the opportunity presents itself.

Into this whole mix enters a gorgeous local policeman, Victor, who is investigating the murder, the disappearance of Laurel and who is interested in Giavanna.

This is a fast paced book with lots of action and some romance. I found it a bit hard to follow in a few parts because there was just so much happening and so many different sub-plots but on the whole this is an entertaining and interesting read.

Shattered by a broken engagement and a business venture derailed by Jerome Haddad, her unscrupulous partner, Giovanna Rogers goes on a luxury Galapagos cruise with her grandmother to decompress.

At least that’s what her grandmother thinks. Giovanna is determined to make Jerome pay for what he’s done, and she has a tip he’s headed for the Galapagos.

While snorkeling in Gardner Bay off the coast of Española Island, Giovanna and another cruise passenger, tortoise researcher Laurel Pardo, both become separated from the group and Laurel is left behind. No one on the ship will acknowledge Laurel is missing, and Giovanna suspects a cover-up.

When the police come on board to investigate a death, Giovanna is sure the victim is Laurel. She’s anxious to give her testimony to the attractive local detective assigned to the case. Instead, she learns someone else is dead, and she’s a person of interest.

Resolved to keep searching for Laurel and make sense of her disappearance, Giovanna finds that several people on board the cruise ship have reasons to want Laurel gone. One is a scam involving Tio Armando, the famous Galapagos giant tortoise and a major tourist attraction in the archipelago. And Jerome Haddad has a hand in it. Thinking she’s the cat in this game, Giovanna gets too involved and becomes the mouse, putting her life in jeopardy. But if she doesn’t stop him, Jerome will go on to ruin others.