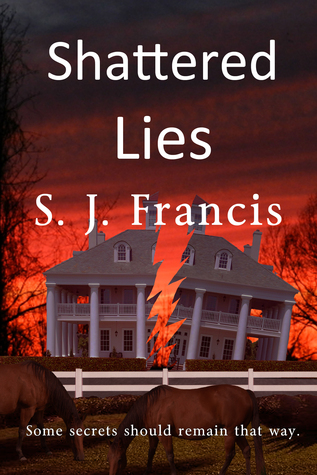 Today’s team review comes from Olga, she blogs at http://www.authortranslatorolga.com

Olga has been reading and reviewing Shattered Lives by S. J. Francis

I’m reviewing this book as part of Rosie’s Book Review Team and was offered a free ARC copy of the book in exchange for an honest review.

The novel, as promised by the description, deals with important themes: family relationships, adultery, betrayal, secrets, lies, race, loss and grief, illness… The story shows us how two families, the Thayers and the Johnsons, who’ve always lived close to each other in the family ranch of the Thayers, a white Southern family, while the Johnsons (African-American) worked for them in a variety of capacities and lived within the grounds, are much more closely linked than they appear at first sight. Kate Thayer, the youngest of the family, finds a diary written by her mother that opens up a Pandora’s Box of secrets and lies, including suicide, child abandonment, and questions about her own identity.

Emotions run high for all the protagonists and also the less important characters, and as the story is narrated in third-person limited point of view it allows the reader to see things from inside the heads (and the hearts) of different characters. This does not make it confusing but instead it gives readers an opportunity to better understand some of the characters, which at first are difficult to like or empathise with (like Katherine, Kate’s grandmother).

The novel is full of emotionally tense moments, and many secrets are revealed very early on. That results in much of the story delving into the changing emotions of the characters (from anger, to guilt, to fear, and back again), with the rhythm of the story speeding up and slowing down at times rather than providing a totally smooth ride.

Despite punctual references to current times (several mentions of Obama, the years when different events took place, and comments about how things have changed over generations), the story seemed to live in a time of its own and in its own environment, creating a somewhat claustrophobic sensation. The only interferences by the outside world take place in the train (where there is a nasty experience with some white youth, and a nice encounter, which to Kate exemplifies the fact that people can fight against prejudice at a personal level, no matter what pressures they are subjected to by their environment), and later in the hospital, although even that serves mostly as a background for the family’s battles and eventual peace. This is mostly a personal story, although it reflects wider themes.

The North and the South are depicted as fairly different worlds, nowadays still, and the codes of behaviour and the topics brought to my mind Faulkner’s novels (although the style and the treatment of the material is completely different). It seemed difficult to believe that in the late 1980s nobody would have spotted that Olivia, Kate’s mother, was pregnant with twins (even if she didn’t want an ultrasound), and that the doctor wouldn’t think of calling for help when he realised the delivery was not going well (especially as this is a family of means). But perhaps the details are not as important as the experiences in this melodrama that ultimately provides a positive message of hope and forgiveness.

This is an emotionally tense read, with some slower and somewhat iterative self-reflective moments, and some faster ones, exploring issues of identity, prejudice and family that will make you think about your own priorities and preconceived ideas. Ah, and 10% of the royalties go to the Polycystic Kidney Foundation, a very good cause (and relevant to the story).