Terry has been reading Baby X by Rebecca Ann Smith 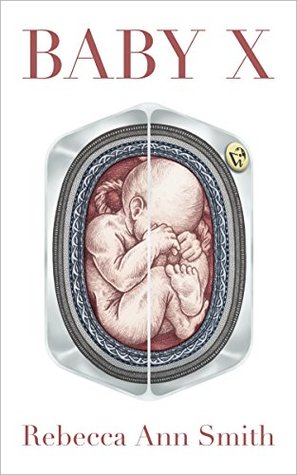 Baby X would come under the subsection of ‘medical thriller’, I presume. Human interest comes in the form of Karen and Robert Frey, a couple who have suffered miscarriages and try all sorts of methods to become pregnant, eventually agreeing to IVG, which is a process by which the egg is fertilised outside the body and the foetus gestates in an artificially prepared womb.

The thriller part comes in the form of doctor Alex Mansfield, who has a great deal to think about apart from Karen and Rob’s plight and the growth of Baby X, not least of all the shady medical experiment company Verlaine, and their plans for the future of childbirth.

The book is very well written, nicely paced, not too long, and I enjoyed it. The mental deterioration of Alex and the dilemmas faced by Karen are convincing, and the author obviously knows her subject. The medical information is completely outside my sphere of knowledge, but it’s not too difficult to understand, even for a childfree person like myself.

Who would enjoy it? Any women who have ever suffered any problems with fertility; I imagine they would find it fascinating. Any women who have had experienced pregnancy and childbirth, too, I should think, and are okay with reading something quite hard-hitting; this is a thriller, not a yummy mummy book!   It’s good. I haven’t got anything negative to say about it.

Noelle has been reading Baby X by Rebecca Ann Smith

Baby X by Rebecca Ann Smith is a work of science fiction…or is it? The story is built around the ethical and human considerations of growing a baby (embryo, then fetus) ex utero – that is, in an artificial uterus in a laboratory. Scientifically, we are almost at the point of being able to do this, so what are the concerns?

The story is told in first person from different viewpoints: Alex Mansfield, the physician and scientist overseeing the entire operation, from conception to implantation to growth; Karen Frey, the woman, who for genetic reasons is unable to bear a child, and who chooses to have a donor egg fertilized by her husband’s sperm and grown ex utero; and Dolly, Samantha McFarlane, who takes the position of laboratory assistant in Dr. Mansfield’s lab and thus observes the motivations and emotions of both her supervisor and the patient.

Having these three viewpoints is essential to understand the complicated motivations of each woman and added a depth to the story. What I had difficulty with was the timeline: the story jumped forward and back. I think it would have been better written in a linear fashion, since the changes in point of view, coupled with the jumps in time line, led to some initial confusion on my part.

An element of surprise is given away at the very beginning – Dr. Mansfield births and kidnaps the baby boy, named Baby X, and goes on the run. This grabs the reader and the how and why of it develops through the rest of the story. I think using this as an introduction is fine, as long as the remainder of the story proceeded in a straightforward fashion.

The author does a bang up job combining the science and medical ethics of the various techniques available to help childless couples, and since I myself went through a round of in vitro fertilization, I could feel Karen’s pain and sense of worthlessness. Her husband, Robert, came across as a cypher, in that he initially agreed to everything having to do with Karen’s decision to try IVG (in vitro gestation), only to reject his wife and her feelings after the event. This struck me as off, but it’s certainly the author’s choice in developing her characters! There was no discussion of adoption (something that was considered in passing later on), which is usually something childless couples discuss at the outset of their decision-making.

The mystery comes with the involvement of scientist with a questionable past in Alex’s life – what is his motivation and is he trying to harm the baby? Why is Alex experiencing changes in her physiology? Through it all, we get the thoughtful observations of Dolly, who is being questioned about the process and the people involved via a Public Inquiry. Despite the furor generated by the media, she remains close to and supportive of Alex, all the while questioning the ethics and ramifications of IVG.

This book explores the maternal instinct from any mangles, along with its challenges and compensation. I enjoyed it, possibly because of my scientific background and personal experiences, but also because there is good story telling here. It is leavened with the humanity and decency of the author’s consideration of the medical ethics and the readers are left to decide for themselves how they feel about the issues raised.