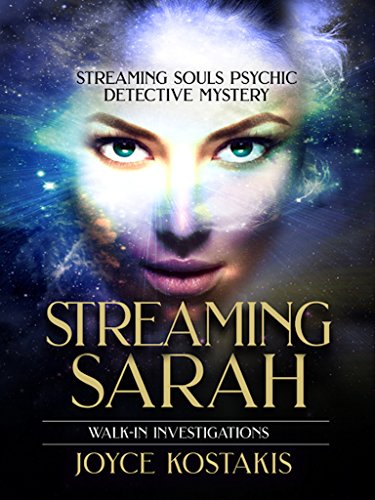 Streaming Sarah is a paranormal mystery set in the future. It opens with a suicide attempt; Katie is a police detective who ran away from her own wedding. Now she’s in a coma, it’s a safe place and she is in no rush to leave the family that she has reconnected with in the spirit world.

Katie’s near death experience opens up her psychic channels; she’s visited by a spirit from a cold case murder who gives her clues to new evidence. Katie sensibly turns to those with psychic experience for help with her new abilities and she opens her once closed mind to the possibilities of spirits working with the police to help solve future cases.

I enjoy stories that feature spirits and psychic experiences and I thought the author did a good job of introducing the afterlife without it feeling like a lecture. The murder mystery wove in well with the paranormal side and I liked how the ending was left so that this can work as a series. The only part which I was unconvinced about was why it needed to be set in the future as this aspect played such a small part, unless it will have a larger impact on books further down the line.

Walk-In Investigations is like Ghost Whisperer meets ‘Dead Files’. Homicide Detective Katie Hanson learns to channel messages from deceased victims to solve a series of life-changing cold cases. As her current case unfolds, Katie realizes a deceased witness account can be just as flawed as the living. Nothing is as it seems. Sarah and her son Matt give conflicting accounts as to who murdered them. Katie’s gut instinct is to believe Sarah, but the evidence doesn’t support the testimony. Will channeling the deceased lead her to the truth or cause her to arrest an innocent man?