It’s been a while since I read a non fiction book. Whilst I generally enjoy the genre, it’s usually more to gain knowledge on a certain subject, to read about a particular topic or person. And then move on.

Sue Coletta‘s Pretty Evil New England is a book that will stay in my mind for a long time. I should say at this point, although I never give spoilers when reviewing fiction, I have, below, given some details of each of the five women, the murders and the results of the trials

It is obvious from the beginning that the author has researched these stories extensively. Her attention to detail is remarkable. Not only in that she brings these women to life for the reader, not only in that their crimes are revealed, but the background story of each one gives an insight to the way their characters were formed. Which, in a way, gives the reasons, why it was almost inevitable, that they became murderers.

The author gives a voice to each of the woman. It’s quite chilling to hear the way they saw the world and their victims. The reasons they say why they chose their victims are varied; suffice it to say, it only shows how evil they were.

The book is divided into five sections, dealing with each woman: Jane Toppan, truly frightening in the caring facade she presented to society for so long. Wicked in her careless reasoning for the deeds she carried out – for the way she discarded the deaths of some. Reading between the lines of the author’s writing, I thought Lydia Sherman was a a sociopath with little empathy for those around her. Again, a woman with veneer of compassion in public life that hides her true vicious character. Nellie Webb was a conundrum; well educated and religious, she stood trial as a poisoner but was not convicted ( though many doubted her innocence) Afterwards, together with her husband, she vanished. Her grave was never found. Sarah Jane Robinson, in debt and desperate for the payment from insurance policies, nevertheless, gave the appearance of a compassionate woman.who gathered her own and others’ families around her but she was a woman who claimed to have dreams of loved ones dying. And then they did. After the trial, she lived the rest of her life in solitary confinement. Harriet Nason was a solitary person by choice, viewed by many in the community with distrust. Although shown through the author’s research to be almost certainly the murderer of four people, she was found not guilty.

For me, Sue Coletta’s writing style keeps the reader enthralled. Her attention to detail is impeccable; she presents the court transcripts, newspaper articles, the interviews with the women against the background of the era at the time, and reveals the society they lived in.
I must give a mention to the illustrations and photographs. Excellently portrayed and placed to add a grim reality to the text.
And I loved the cover.

This is a non fiction book that will fascinate any reader who loves both fictional and real life crime. Thoroughly recommended. 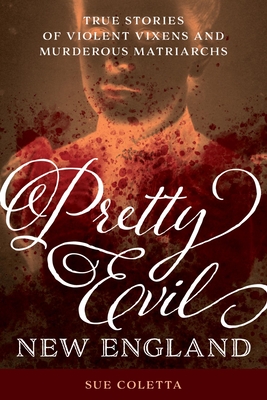 I have always been interested in true stories about people behind ghost stories. Most myths and legends about ghostly sightings involve a person who has died badly at the hands of a third party, although a few are suicides. It seem that people who die as a result of murder are generally believed to become vengeful and become trapped in the spirit world due to a desire for revenge on their murderer.

Recently, I have turned my attention from the murdered to the murderer and I have been reading a few true story style books about serial killers and child murderers. I am particularly interested in the psychology of people who kill.

When I saw this book, Pretty Evil New England, it fitted exactly into latest reading craze and I was most interested to read the histories of these five women who all murdered continuously and without any remorse.

All of the stories in this book were detailed and well researched and I thought there were a couple of very interesting revelations about the nature of female serial killers crimes. All of them murdered their nearest and dearest including husbands and children. The unmarried women and those without children killed relatives and close friends. I thought that was very intriguing. What kind of a woman kills her own child or son-in-law?

Another interesting fact was that they all used some sort of poison, mainly arsenic, which causes a painful and horrible death. Imagine watching your own daughter suffering from cramps, vomiting and dehydrations as they suffer a horrible death. It was also amazing that none of the attending doctors initially realised the deaths of the victims were due to poisoning. It does seems rather unobservant and surprising, even in those days. I wondered if men’s erroneous concept of all women as homemakers and caregivers was responsible for this lack of vision.

As I read the book, the similarities in the illnesses of the victims became very apparent. Many of the women killed a number of people living in the same house or within the same family, which increased their risk of being caught significantly. If your husband or husbands and your children all die, that is bound to raise suspicion. I can only assume that having got away with murder a few times, these women became over confident and this led to their down falls.

This book covered information that interested me greatly, but it is a non-fiction book and some of the content is a bit dry, especially the detail around the court scenes. The last story also jumped between two different cases which, although there were some similarities, were not connected in any way. Moving between the cases made following the two separate stories confusing for me and, as there was no connecting thread at the end, I didn’t understand why the author chose to write this section in that manner.