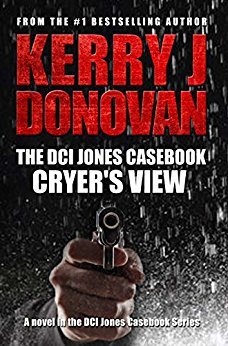 This the first book I have read by Kerry Donovan and I was definitely not disappointed. There are three other books in this series, and I plan to read them all.

The murder of Detective Sergeant Richard Juno at the end of a long solo tail of a low-level suspect is the latest in a series of police operations in southeast England that have ended in disaster. Juno is a member of the Organized Crime Task Force.

Detective Philip Cryer, recovering at home while his smashed femur knits following two surgical procedures, is asked to replace Juno in the OCTF by Chief Superintendent Knightly, a senior office from the National Crime Agency. Detective Chief Inspector David Jones, an old friend of Knightly and Cryer’s immediate superior, presses the issue, because both he and Knightly are convinced there is someone in that unit selling police intelligence – a dirty cop. Cryer is the best person to find the mole quickly because of his ability to scan and sort vast quantities of information, using his photographic memory.

Despite the fact he is still in considerable pain from his injury, Cryer agrees to their request and is dispatched to the OCTF with a cover story. There he meets the members of the team, among them a gorgeous blonde secretary who immediately has designs on Cryer, the unit leader Detective Chief Inspector Bee Endicott, and Detective Inspector William Hook, who takes an immediate dislike to Cryer. Hook is a nasty character with a personal interest in finding the killer of Richard Juno, who was his best friend from childhood and was married to his sister. Nevertheless, Cryer begins to think Hook is the mole, code named Alpine. When the mole is revealed, I was surprised, along with all the characters in the book. These characters are wonderfully wrought and the reader is never confused as to who is who. Cryer is particularly three-dimensional; the author lets us into his mind and his way of thinking from the beginning.

The policies, procedures and hierarchies within the National Crime Agency are laid out in detail, woven nicely into the story. This is the first time I have read a mystery where the police do not carry guns, and the awkwardness with which that obstacle is handled was surprising.

The pacing is very fast, and the book is a page turner with lots of twists and turns in the plot. Hard to put down, and I highly recommend it.