Olga has been reading Pointe Patrol by Earik Beann 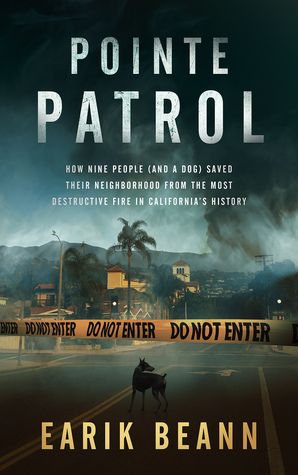 This is an inspiring book and a fascinating account of what happened to a group of people who were fortunate enough (with a fair amount of human help as well) to have their houses survive a terrible fire that killed forty-four people, burned over 245000 acres and cost at least $9.5 billion in insured damages (and around $85 billion to the US economy). As the author notes, these group of people were not all house owners (he and his wife, Laura, were renting, and so were a number of the people who formed the #Pointe Patrol), but they somehow took it upon themselves to keep the neighbourhood safe.

The story reads like one of those fiction books (or movies) where a bunch of people —who have little in common and are pretty normal— discover their inner heroes and come together achieving great things. Only, this is not a fictional account. Yes, these are pretty normal people, and although some knew each other from before, the author makes the point more than once that due to his job, mostly online, he did not have much contact with the neighbours, and it is his wife who comes up with the idea of creating a chat group for the neighbours that they use to keep everybody informed of what is happening, both the people who have managed to return to the evacuated area, like they have, and also those who are outside and whose houses are still standing. As we read, we learn information about the neighbours, although not necessarily in a lot of detail (some are stubborn, some are control freaks, other have an interesting sense of humour, they are not always truthful…), and we also hear some of their opinions and prejudices (yes, we might not always agree with their politics, with their ideas on certain subjects) and, thankfully, they are not perfect. Earik and his wife are ‘the yoga people’, and other than some regular get-togethers, many of them knew each other only superficially, if at all. There is also a couple who remain in the area and never participate in any of the general efforts, and they sound quite disagreeable. So this is not an idealised version of reality, although it is an inspiring story that illustrates that people can get on when they have a sense of purpose and a mission higher than themselves, and they all work together towards a goal.

Saying that, it is difficult to read the book and not think that it would make a good TV movie. You have the retired fire-fighter, stubborn and determined, who ends up being known as Chief, you have another neighbour who works in the SQUAT team, Wayne, Eddie, who turns his garage into the neighbourhood coffee-shop and bar, two Mikes, the police and the national guard, Oscar —Earik’s Doberman, who loves his new role as proper guard dog—, their two cats, and also the people outside who keep in touch via text and provide as much support as they can with food supplies, medications, and also updates on news and life in general.

I was surprised at times at how vivid a picture the book portrays of the situation, and how, despite the fact that they are pretty much isolated and become, as the author describes it more than once, ‘a tribe’, the bigger society and its trappings interferes every so often, giving everybody reason to pause. There are the looters, always trying to get in and rob whatever they can, there are times when the reactions of the police to different individuals vary a lot depending on who they are (yes, race do matters, even in emergency situations, it seems), and although in this case the emergency seems to get the best out of this group of people, that is not the case with everybody involved.

Is there anything I didn’t enjoy? Well, the story is told from the author’s perspective, and as can happen with memoirs, it is not written as a thriller where action is everything and no extraneous information is offered. The author sometimes goes off on tangents, including information about his and his wife’s personal circumstances (they had moved very often up to that point), stories about their cats and dogs, also about how to handle a big dog, his point of view on firearms (not one I share, and the arguments he uses to try to convince his wife would definitely not convince me), a long dissertation on a particular local beer and its merits, and some pretty personal things, and although I mostly enjoyed those and they made it come more alive for me, I suspect they might be frustrating for some people, and I’ve read some reviews that mention those.

My other worry was the fact that, no matter how well they did and the amazing thing they achieved, their circumstances were very special, and it is not something that everybody should consider if faced with a similar situation. They had a retired fireman living in the neighbourhood, and they were lucky enough to have a sufficient number of neighbours taking part, with necessary materials, water, and enough outside support to manage to pull it off. (I could not help but wonder what would have happened if that was not the case and how different the results might have been in a neighbourhood without resources, financial and otherwise). Basically, keep safe and follow advice. Readers might take issue with other things: there is no gender equality at work here (Laura is the only woman there, she leaves at some point, and the rest of the women are supporting from outside, although there are policewomen and a woman member of the National Guard as well, but not members of the group), and, as I mentioned, some of the personal attitudes and comments might not be to everybody’s taste, but that is understandable when we are reading a true account, rather than a fictional one.

I enjoyed the narration, and felt as if I had shared in some of the sense of community and joint purpose of the group. I also enjoyed the off-track comments (some), learning more about how the emergency services work and are organised, and I loved Oscar and the cats as well. The fact that the profits for the sale of the book will go to support fire victims and to the families of fallen first-responders is another good reason to recommend the book. If you’re looking for an inspiring true-account of people dealing with an emergency situation, and you are fascinated by community spirit, I definitely recommend this.

On October 9, 2017, California suffered one of the most destructive fires in its history. The Tubbs Fire burned 5,643 structures and killed twenty-two people in Sonoma County. The fire department was completely overwhelmed and was so busy trying to save lives that they had to let many houses burn rather than waste resources in trying to protect them. During this chaos, nine of us snuck back into our neighborhood in the mandatory evacuation zone and formed a vigilante fire force. We called ourselves the Pointe Patrol, and saved our neighborhood, as well as an apartment complex across the street from certain destruction.

As if the fires weren’t enough, we found ourselves in the midst of anarchy, with looters running unchecked through the streets. We chased them out of houses with shovels, confronted them when they showed up in disguise, and patrolled the area with a completely over-the-top Doberman. The other neighbors who had evacuated organized themselves into our support network and supplied us with food and equipment, which they passed through to us across the police lines. My wife and I were part of that nine-person team and experienced all of this firsthand. This is the story of what happened at Viewpointe Circle during those two weeks in October.