A really great read full of hot humid settings and spooky characters. Mia is witness to a murder and needs to be under protection. Ryder turns up to take her deep into the Louisiana Bayou, but danger follows and Ryder has his own reasons for taking on the case.

With the murderer in pursuit of the couple they drive deep in to the bayou in an attempt to escape. There is voodoo, and tea leaf readings mixed with tradition, legend and a good dose of hot passion. I loved the swamp witch and Mad Mama’s antiques, and of course the mysterious doll sent a good shiver down my back.

Really, really liked this book, well done. This is a HarlequinE book.

Today I’d like to welcome author L.T. Vargus to the blog, yesterday I reviewed her book “Casting Shadows Everywhere” you can read the review here http://wp.me/p2Eu3u-4nq

1) Where is your home town?
I’ve lived in Kalamazoo, Michigan, for about 12 years. Actually, I’m about to go shovel a foot of snow off the of the driveway so I can go to the grocery store before it snows more tonight. It’s like I always tell people: Michigan is a great place to live if you like a lot of snow and murder.
2) How long have you been writing?
I’ve been serious about writing for about 4 years. I was interested in writing and stories from a pretty young age, though.
3) How do you see the title of your book “Casting Shadows Everywhere” fitting with the storyline?
I think of the “shadows” in the title in terms of the archetype – so more like the dark side of humanity instead of literal shadows. Nick casts his shadow on Jake in the story, and as he does so he basically reveals that all of his ideas are based on the underlying messages all around us in advertisements and wars and slaughterhouses and the way people treat each other and other beings in general. The idea that morality isn’t really real is sort of all around us these days, and Nick is following that premise to its logical conclusion. That’s the shadow that’s being cast everywhere, to me. It’s open for interpretation, though. I mean, they’re creeping into dark places, so I think there’s a literal connection as well.
4) You’ve written the book from the point of view of a 15 year old boy, how much of a challenge was that as you are female?
Jake is based on a mixture of some people I knew in high school. I knew them pretty well, so it wasn’t that hard to write from that point of view. I guess the idea of writing from the perspective of a different gender might be a little overrated in terms of difficulty. If you want to sound like the average 15 year old boy, just mention boobs a few times and you’re well on the way to authenticity in my experience.
5) The storyline took quite a sinister turn for Jake, what made Jake turn away from the road of no return?
I think Jake’s self-awareness catches up at the end. I liked the idea of a seemingly self aware character that slowly starts deluding himself over the course of the story and becomes a less and less reliable narrator. I don’t know if I executed that as well as I’d hoped. Anyway, grasping the logical conclusion of Nick’s teachings snaps Jake out of it at the last minute.
6) Do you think much of the storyline reflects issues that teenagers in America face today?
On a literal level, I actually think the book is tame in some ways and over the top in others. Loads of kids are drinking, smoking weed and having sex on a regular basis by Jake’s age. He’s really shy, so he’s barely dabbled in those. On the other hand, the majority of teenagers definitely aren’t burgling all that much. Morally and philosophically, though, I think the issues are relevant.
7) Would you agree that learning to live your life and finding a reason to get out of bed each morning is worth more than winning the lottery?
There are many examples of lottery winners’ lives falling apart shortly after they get the money, and studies have suggested that earning anything above $75,000 a year doesn’t actually make anyone happier. So yeah, I think finding things to be passionate about and people to connect with both mean a lot more than money.
8) Are you working on your next book? Can you tell us about it?
I actually have a few different works in progress, and I don’t know which will be finished next. If I had to guess, I’d say that the next to be released will be a comedy about a slacker girl in her late 20’s that seeks revenge by trying to ruin the wedding of a girl that tormented her in high school. It’s a lot lighter than Casting Shadows Everywhere.
9) Do you have an expected publication date for fans?
I’m hopeful that it will be out in the summer or fall of 2014.
Thanks again for the awesome review and featuring me on your blog. I really appreciate it. 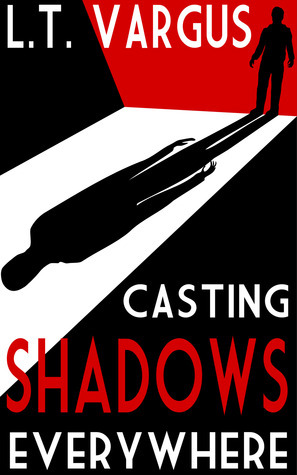 Casting Shadows Everywhere – Goodreads, Amazon.co.uk, Amazon.com
Thank you L.T for being our guest today and good luck with the next book.

Until You by Sandra Marton

A modern romance with twists and turns. This book enters the world of high fashion, politics and the secret service. As the story unfolds it delves deeper into the character’s lives and a darker side appears. There is a mix of fear, frustration and passion which moves the story along and it ends with a big happy ever after scene. This book does contain adult content.
See the book here on Amazon