Cathy has been reading On Lucky Shores by Kerry J Donovan 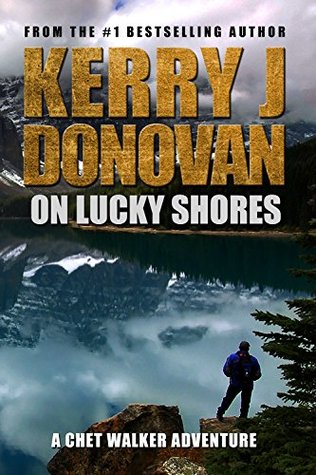 Singer/songwriter Chet Walker has been running from his past for the last eighteen months, hitchhiking from town to town, singing for his supper and hoping for inspiration along the way. As he heads towards Lucky Shores, a little town in the Rockies, after seeing a billboard advertising an open mic night, he witnesses a terrible car accident. The only occupant of the car is in a very bad way and as Chet does what he can to help, the dying man whispers a few words, a mysterious message for his daughter which he wants Chet to deliver.

Chet has no idea of the developments which await him in Lucky Shores, or how delivering the message and meeting Joey Dolan will change his life. He is met with distrust, unfriendliness and aggression from some of the residents. Chet has his work cut out to get Joey to listen to what he has to tell her, until he comes up with a novel way of getting the message across.

Michael Dolan is despised by most people in Lucky Shores, injured or not, and by association Chet is unwelcome. The small town sheriff is suspicious and the two local thugs take exception to Chet, their blundering attack thwarted by some great moves, leaving them injured and embarrassed.

The puzzling message from Michael Dolan to his daughter involves both Joey and Chet in a years’ old mystery, which puts lives in danger, most notably their own. The mixture of action, suspense, mystery and a dash of romance is combined really well and I love the song verses at the beginning of each part of the story.

The plot is well paced with lots of action, romance and mystery, well drawn and credible characters, both main and secondary, and set against the evocatively described, imposing and impressive backdrop of the Colorado stretch of the Rocky Mountains. I really like Chet and the way his back story and depth of character is revealed as the story progresses. It gives an appreciation of his complex personality, versatility and an understanding of why he responds as he does to certain situations.

Judith has been reading On Lucky Shores by Kerry J Donovan

Kerry Donovan’s writing style is admirable; his method of telling a story is easy to read but gives a depth to a plot that keeps the reader interested.

The book is set in a small town called Lucky Shores in the Colorado Rockies, a town struggling in poverty.  But rich in disparate characters.

I loved the protagonist Chet Walker, a musician travelling around the country, looking for gigs to perform in wherever he can find them. The author has created a many-sided character with a mysterious background that if deftly revealed as the story progresses. And Joey (Josephine) Dolan is a perfect foil for him; yet another rounded character. In fact there isn’t one character in the book, whether I liked them or not, that I didn’t believe in.

The dialogue differentiates all these characters, it’s easy to work out who is speaking without the attributions and although the author uses American euphemisms, syntax and slang it was easy for me to read; in fact it would have been wrong not to stay true to the setting of the book.

And the descriptions of the settings are evocative and full of imagery. All create a picture for the action.

I don’t easily follow fight scenes; they’re as difficult for me to envisage as they seem to be awkward to write for many authors. But Kerry Donovan makes them both visible and (dare I say?) funny. The descriptions of the protagonist’s use of martial arts are brilliantly depicted

The pace of the plot moves steadily but with many surprising twists and turns, building the tension as the story reaches the denouement. Yet is this the end of Chet Walker? Somehow I think not.

This is a thrilling mixture of adventure, crime, mystery, romance; a real cross genre of a book. I enjoyed the read and don’t hesitate to recommend i

Terry has been reading On Lucky Shores by Kerry J Donovan

On Lucky Shores by Kerry Donovan

Well, this was a cracking good yarn! Not the sort of book I’d usually choose at all, but I enjoyed it.

It’s set in hick town Lucky Shores in the Colorado Rockies, in winter. All I know of Colorado is Dynasty and South Park, and Lucky Shores is definitely more Skeeter’s Bar, South Park, than Krystle and Blake Carrington. The story starts when drifter musician Chet Walker (what a great name!) wanders into town, looking for a gig and a place to rest his head. Lost on a lonely road, though, he sees a motorist suffer a crash, and he runs to save his life – and so his trouble begins.

This is an adventure story, a crime mystery whodunnit thriller, with a nice little bit of romantic suspense to keep Chet from wandering back the way he came. The action picks up on a mountain hike when Chet and his female companion can’t work out who their enemies are…

Kerry Donovan has done ‘slightly scary American hick town’ very well indeed. The characterisation is extremely good, the plot totally works, and the dialogue rips along, tight and realistic, often sharp and funny, too. Oh, and as for Chet Walker – well, you know a character’s come to life on the pages when you start to fancy him, don’t you?

Today’s team review is from Francis, she blogs at http://disappearinginplainsight.com/

Francis has been reading On Lucky Shores by Kerry J Donovan

I loved the setting – a small town nestled in the Colorado Rockies. Main character Chet, is finely drawn from his back story that informs his current actions and reactions to his multi-faceted personality – the musician, the martial arts fighter, the drifter, to say nothing of his mysterious knowledge of firefighting and medicine. It takes some time for Chet to come completely into focus – another master stroke of storytelling! A line like, “… focused on the pain and the rain and the water running down the drain.” as Chet observes his surroundings and turns them into a tune captures the reader’s imagination. A mysterious sheriff, a small town doctor who seems anything but and a damsel in distress round out a team of secondary characters who all hit the right notes. Solid writing – an enjoyable read.