Terry has been reading Not Here by Genevieve Nocovo 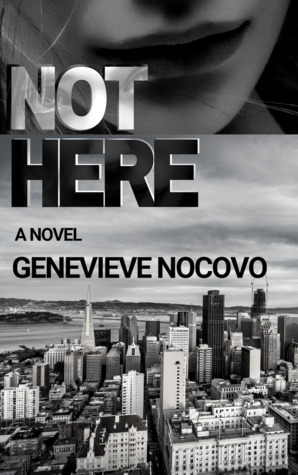 Dina Ostica, a 23 year old podcaster living alone in San Francisco, has a troubled background after escaping a difficult relationship. The mystery begins when her friend, an old hippie who is her go-to source for material for her podcasts about life in and the history of the city, disappears.

I thought the atmosphere of the city came across as most authentic; it is clear that the author has a fine knowledge of the place. I liked that the subject matter; Dina’s story was very ‘current’, with issues raised so relevant to this part of the 21st century. The problem I had with the book as a whole, though, was that it felt rather flat. There were too many irrelevancies that were not woven into the story, like what people wore and what they ate, intricate detail about gym sessions and mundane conversational exchanges. Dina is written in the third person, in such a way that we never experience her inner thoughts; we are told how she feels, or what she thinks about something, but I felt I was being supplied with information rather than getting to know a character.

The plot is well put together (aside from the fact that I couldn’t work out how Dina hoped to make enough money to live on from podcasting), the ideas are interesting and the book is professionally presented, but the writing itself needs some work if this series is to become memorable. The information was all there, such as what a place looked like and how someone felt, or what happened after what had happened previously, but I never felt involved.

I believe this is the author’s debut novel. It is competent and the basics are there, with some excellent plotting and slow build of suspense; she just needs to work on really getting inside the head of her characters, seeking ways to make her storytelling more captivating, and her dialogue more realistic, character revealing and interesting.

Olga has been reading Not Here by Genevieve Nocovo

This is the first novel published by this author, and although it might not be to everybody’s taste, I found it an intense and gripping book that deals with important topics. And I was fascinated by the portrayal of the protagonist.

I was intrigued by the description of the novel because I do like the promise of a strong protagonist (although it does not always work, I did like Dina), and because the topic promised something a bit different to the usual thriller. No serial killer, no small-town setting, but a narrative closely linked to a time, a place, and a social issue. Any reader who lives, or has lived, in a city, knows how expensive it is to secure accommodation in a safe neighbourhood, and what a cut-throat world property development can be. In this novel, set in San Francisco, that is literally so. The fact that the protagonist was trying to make a name for herself in the world of podcasting, added to the interest for me, as I’ve always interested in radio and, in my mind at least, podcasts are closely linked to the immediacy of radio, especially to the programmes broadcast by local radio stations.

The story is told in the third person from Dina’s point of view. And it is a very interesting choice, because at times it feels like a first-person narrative (there are plenty of descriptions, although brief, of things like the clothes the protagonist is wearing, and the drinks she makes… She likes tea, and I’d dare say her choice of tea at any point is a clear indication of what her mental state is like at the time); it manages to capture perfectly the tone of character’s thoughts, her fears and anxieties, gives readers a good insight into her mind and feelings, while at the same time offering an outside perspective, an observer’s point of view. I might be stretching it here, but I felt that this is the way Dina sees herself. She is a young woman who has undergone a very traumatic experience and went through a period of depression following it. Now, determined to survive and get back on her feet, but also to never be a victim again, she is always on alert, observes things and people around her, never quite trusting what they say, or her own actions and reactions, second-guessing others and her own motives, ready to flee at the slightest hint of risk, but working hard to rebuild her life. She is not going to take it lying down. She joins a gym and self-defense classes (well, an interesting combination of martial arts and fighting that introduces action scenes and another setting that proves very important to the story). She is determined to make her podcast a success and wants to pursue stories that are important for the people around her, rather than those that might bring her commercial and financial success. Although she is cautious, due to her previous experience, she puts others’ needs ahead of hers, and never hesitates to step up to help others and offer her support, even when it might be dangerous. Her reactions to what happens to her in the story (that, in a way, mirrors her abuse, at least in her head) are totally believable and they match the defence mechanisms she has put in place.  I don’t usually do trigger warnings, but I feel survivors of domestic violence and abuse might find it a hard read. On the other hand, she has moments of desperation but she never gives up fighting, and she is a compelling and inspiring human being rather than a one-dimensional cut-out.

I felt the psychological side of the story, and the insights into Dina’s thoughts and reactions were very well done —there is no magical cure here, no saviour that comes along and sorts everything for our protagonist, and she does not fall for the first person coming along either, no matter how attractive he might be— and although some of the story elements stretch somewhat the imagination (and test the suspension of disbelief, but when we think about true stories we have heard or read, we soon realise that they are not as far-fetched as at first they might appear), the author manages to create a compelling and cohesive story from diverse strands: the world of podcasting, the city and property development, homelessness and crime in San Francisco, abuse and domestic violence, cage-fighting, police corruption, local government conspiracies…

This is not a light read, and there are hardly any moments when the tension loosens up. No light relief present either, and readers need to be prepared to experience a gamut of uncomfortable emotions, that succeed each other at a fast —take-no-prisoners– pace, especially towards the end of the novel.  I’ve mentioned already the descriptions that might not suit all readers. The author ignores Stephen King’s warning about adverbs, and although I have never been too worried about it, I admit it might give one pause, especially when they stray away from the most neutral and commonly used. But other than that, the book is written in straightforward style, it flows well, and it shows a good knowledge of the city and the topics without going overboard and “telling” too much.

I’d recommend this book to people looking for a different kind of thriller and a strong female survivor as a protagonist. Not a superhero, but a young woman determined to make it and an inspiration for readers familiar with these feelings and experiences. I kept thinking about Chinatown as I read this novel (perhaps because of the focus on local politics and speculation) and although it is set in a different city and historical time, if you enjoyed the plot of that story, love San Francisco, and are keen on a dark urban setting, you should try it. I can see this author going from strength to strength, and as this is the first in the series, I look forward to seeing what Dina does next.