Terry has been reading Four Seasons In Nepal by Nicola McGunnigle 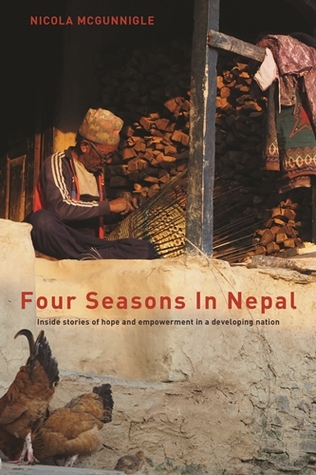 Four Seasons in Nepal is an account of the year the author and her family (husband and two young sons) spent a year in the country after the devastating earthquake of 2015; Nicola was to work with the NGO International Nepal Fellowship (INF).  This book describes the decision to go, the journey, how the family settled in, became used to the customs and made friends with the locals.  It tells of her activity in the post-earthquake rehabilitation programme, the GRACE project, in which she would work closely with others to rebuild schools, houses, and (most importantly) the wellbeing and morale of the communities.

This is an in-depth account of the year, about how they adapted to such difficulties as being without power for an extended period of time, but, most of all, how the work of the project helped the victims of the earthquake.  I envied the McGunnigle family the experience, and, of course, felt great respect for all that the INF do.

That the decision to go out to Nepal and help these people is a worthy one is indisputable, but my job is to review the book itself.  I gather it originated from blog posts, and in places I felt that there was too much detail, as if Nicola had written down every single memory and every thought that occurred to her, which makes it a very dense book.  Such detail works in short blog posts, but is rather a lot to wade through in a whole book; and I thought that it being chopped down by a third/edited a little more tightly would have made it more compelling.

Having said this, I would most certainly recommend the book to anyone who is thinking of going to Nepal for similar work; in such a case I’d say it is probably essential reading, as there is no stone left unturned.  From the point of view of someone who just likes reading travel memoirs and is interested in this part of the world, like me, I think it’s more of a book to dip into here and there, reading odd chapters, rather than sitting down and reading it from cover to cover ~ rather like you would read a blog, I suppose!

The cover is beautiful, and the book is well presented, with some lovely photographs at the end.  It is available in paperback only.  You can read more about it and see lots of great photos on the author’s blog, and read delightful sections with her sons’ views of Nepal, HERE.

It’s not your everyday family adventure, packing up to live in one of the world’s poorest nations. But in the wake of the devastating 2015 earthquake, Nicola McGunnigle took a leap of faith, heading to Nepal to work with NGO International Nepal Fellowship, her family in tow.

Not letting challenges get in the way of contentment, she shares everyday moments of living life with restricted electricity and unclean water, in the midst of political instability, which resulted in country-wide fuel and gas shortages. Moved by the resilience of the nation, the family were welcomed into Nepali culture and generous hospitality, despite the obvious additional hardships around them.

Through her eyes as a volunteer, Nicola paints uplifting scenes of committed Nepali staff who work to empower the poorest and most marginalised in Nepal. Through work, travel and everyday encounters, the reader journeys through each season of learning, challenges, hardship and reward.

Nicola was born and raised in New Zealand to English parents and worked in rural Tasmania and outback Australia as a geologist before setting off to explore South East Asia in the late 1990s.
With a passion for supporting clean water, sanitation and education projects she has volunteered plentiful hours assessing funding applications for Water for Survival and TEAR Australia before returning to her beloved Nepal with her family in 2015, which is told in Four Seasons in Nepal.
Nicola now works in the environmental sector in Adelaide, Australia, where she lives with her husband, two sons, three chickens and four fish. She loves sitting down to write when she has a moment between working, volunteering and keeping up with the never-ending cycle of washing. 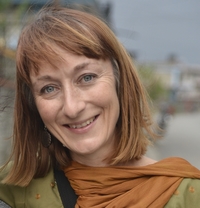