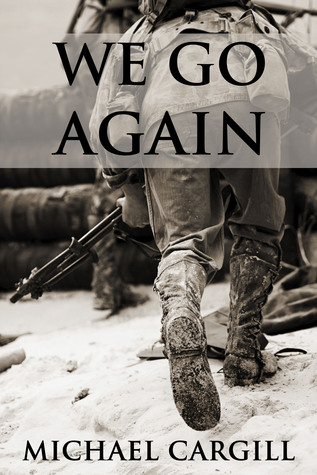 My review for “We Go Again” – 3/5
“This is a descriptive account of the movements of British soldiers during the end of the WWII, whilst posted in France.
If it was based on a real account, had been written in a diary format, or from a first person’s point of view it might have been more powerful. In the way it was written it worked well as a historical reflection on what could have happened and how the men and women involved felt.
There is not much of conclusion to the story, other than to describe the horrific events that occurred. A lot of the facts are poignant and harrowing, as well as touching in giving us a glimpse into how some women felt liberated by the war. For example, by taking on jobs traditionally viewed as meant for men – flying a plane!
The fact many young men lost their lives on all sides of the war is important to remember and the author raises a lot of issues we should never forget. Saying this, it made me sad to think that French women were that desperate to throw themselves into the arms of British soldiers. I find this hard to believe unless they really saw it as the only way to have a better life. But, I can’t imagine they all did it as willingly as portrayed in this account.
A minor gripe was a scattering of typos. It would be a good idea to edit this piece again a few times.
Overall, a thought-provoking read for WWII enthusiasts.”
*~I received a copy of this book for review via Rosie’s Book Review Team*~
Find a copy here from Amazon.co.uk or Amazon.com

Today we have a review from team member Judith, she blogs at http://judithbarrowblog.com/

This novel is set in an era, the nineteen forties, that I love to read about. So why didn’t it quite hit the mark for me?

I have mixed feelings about this book and I’m not sure why. It’s obvious the author has done his research and the history of the Second World War is woven well throughout the plot. The story has a promising start; the characters are instantly developed in the first pages and the dialogue, on the whole, is believable. And there are some good ‘flat characters’; those who add to the backdrop, the locale, by their presence. The trouble for me was that I couldn’t decide who the protagonist was. Told from an omniscient narrator’s point of view the reader has access to all the internal thoughts of some of the characters – which is good – but the narrative switches so quickly from one to another that there isn’t time to empathise with any of them. A shame, because they all have such interesting potential.

Another problem, I think, is with the flashbacks. Although well written, there is no change in tense, no spacing; the reader is taken without warning to another time, another place. Although this does add to the back story of the characters, sometimes the flashbacks are so long it’s difficult to pick up the main story again. I found myself flicking back and forth in the narrative to remind myself where the soldiers were and what was taking place. Which was a shame because each section; the main story and the flashbacks are well written with gripping action scenes and descriptions that gave an immediate sense of place whether it is on the beaches of Dunkirk, inside a Lancaster Bomber, living in  the almost deserted village, whose inhabitants determinedly try to carry on with as normal a life as they can, the cold neglected building the soldiers take over or their contacts with the enemy

So why the doubts about We Go Again? I suppose it was that I never quite got lost in the story; I felt I was watching the action, rather that being there with the characters. I’m not sure that makes sense but I like to be absorbed by what I’m reading – to get that sense of ‘coming up for air’ from the fictional world.

After I wrote this review I looked for the book on Amazon and Goodreads. It has one excellent five star review on Amazon, and more on Goodreads, which goes to show that people can only read a book from their own subjective point of view. So I would just recommend that you give this book a try for yourself.

I will certainly give the other books that Michael Cargill has written a go.

We Go Again by Michael Cargill

We Go Again is a WW2 book set a few weeks after D-Day when the British soldiers were still pushing towards Berlin. We are introduced to a group of eight soldiers sent with unspecific orders as they travel through France. Captain Jones brags about his part in the war in Africa as a Desert Rat, whilst putting down some of the other men who were at Dunkirk.

Several of the other soldiers get annoyed with the Captain and his tale including James Bowden who has his own memories of the horrific crossing of the channel and finding themselves under German fire.

The men arrive at a French village and set up a base. We get to hear back story from James and another soldier David, telling us about their lives back home, in a series of war memories as the book evolves. Piper is a fun character who eats pickled onions and loves all the children they meet.

There is some action when the group shoot down a German plane and take prisoners and the book leads to the final show down when the soldiers must all pick up arms again as the Germans stage a come back.

The opening of the book really hooked me with Captain Jones’s bragging, but after that the story lost momentum for me, I was hoping to be drawn in to the fears and unknown of these still intense days after D-Day. This book has good potential, a bit of writing style tweaking and it could be a winner.

March 29th – Last night we changed our clocks and pushed them forward one hour, I do love the long summer days it brings. Visited my parents and helped change some awkward light bulbs for them. Had a late afternoon walk in the park, it’s very windy and there is plenty of litter.

March 31st – The online versions of the magazines that I write reviews for are out today for the April editions, so I’ve been promoting them for the authors whose books I have included. It’s still very windy, didn’t stop me walking found plenty of litter to pick up. I’ve read and reviewed 22 books this month.

April 1st – The great April AtoZ Challenge got off to a flying start today. I’m visiting and commenting of loads of other challenge bloggers and sharing their posts to Twitter. Began reading Silence and Circumstance by Roy Dimond.

April 2nd – Day 2 of the April blogging challenge. Had my lunchtime walk and picked up litter.

April 3rd – Reading We Go Again by Michael Cargill. It’s Good Friday and we have the in-laws coming over for tea. A quick walk and litter pick between the showers.

April 4th – Have begun reading The War before Mine by Caroline Ross. Day 4 of the April A to Z and have been off visiting and sharing many, many posts.