Brittany has been reading Fractured Memories by Emily Page 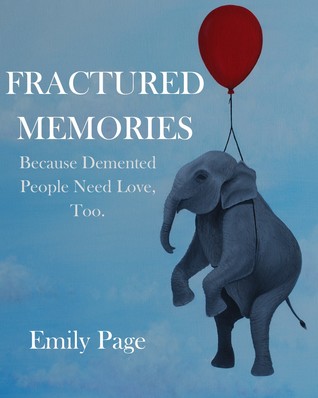 Fractured Memories: Because Demented People Need Love Too by Emily Page is a profoundly raw account of one family’s experience of caring for a father with frontotemporal dementia (FTD).  The story is told from the perspective of an adult daughter (the author) who is caring for her father along with her husband and her mother. The book has three parts.  This first part of the book is much like a traditional memoir, with the author’s experience recounted in a narrative.  The second part of the book reads a bit like a series of journal entries, raw and largely unedited recounts of caring for her father.  The author is an artist, and the third part of the book is a series of paintings she created out of her caregiving experience.

The author’s love for her father is the greatest testament of this book.  Yes, the author becomes angry, emotionally frayed and anxiety-ridden in the seven years she cared for her father, and sometimes those emotions are even directed at her father.  But she never walks from the situation. Underneath all the difficult emotion was an abundantly present love of a daughter. The first chapter recounts her father’s life before his diagnosis. It’s a beautiful celebration of his life before dementia, including his sense of humor, his extraordinary passion for trains and music, and his time as a First Lieutenant in the Vietnam War.

Frontotemporal dementia is described as disease of a thousand goodbyes, like slowly losing the person you love in stages.  The author writes:

The writing style is casual, and portions of the book read like an email from a friend.   It took a while for me to adjust to the casual style. I very much enjoyed the artwork throughout the book.  The author uses images of elephants to portray herself, her father, and dementia itself because “an elephant never forgets” and “An elephant’s faithful 100 percent.”  The book ends with a list of songs, a playlist of the music that was mentioned throughout the book and has a special meaning or memory tied to the author and her father.  Fractures Memories is a must read for anyone who loves or cares for anyone living with dementia.

In 2009, Emily Page’s father was diagnosed at the age of 65 with frontotemporal dementia, a form of dementia that strikes earlier and progresses more quickly than Alzheimer’s, and for which there is no treatment to slow the progression of the disease. Being so young, Page hadn’t had much experience with dementia, but she began documenting, in writing and art, her family’s heartbreaking and hilarious experiences.
As a professional artist, she had often turned to art as a self-prescribed therapy to help deal with life’s trials. This battle was no different. She utilized the elephant as a symbol for dementia, and incorporated sheet music into the paintings because her dad had been a jazz musician. Eventually, Page created 40 paintings that are included in the book. She also began blogging about the range of issues that arose daily as the disease progressed, documenting everything from her own fear of getting dementia, to her dad’s transition to diapers (and the various places he opted to drop his drawers and just “go”), to combatting his compulsions like the need to “clean” the cars with steel wool, to an exploration of how he might have gotten the disease, to finding the right dementia care facility, to the best ways to make him giggle. Page approached the disease from the fresh viewpoint of a younger caregiver. As her blog following grew, so did the suggestions from readers that she turn the blog into a book. After hearing too many horror stories about traditional publishing contracts, she decided to self-publish. She ran a fundraising campaign for her book, Fractured Memories, and presold over 500 copies in less than a month.
“My dad was my best friend. He embraced the ridiculous, looked for the good in people, and mentored and helped people whenever he could. Following his diagnosis, when people asked how he was doing, he’d answer, ‘Not bad for a demented guy.’ He looked for the light hiding amidst the pain. He chose to be very open about what he was going through in the hopes that it would help other people cope with their own diagnosis or a loved one’s diagnosis. Writing this book seemed a fitting way to honor that legacy.”
Page doesn’t shy away from the ugly, raw emotion of life with dementia, but she also looks for the laughter where it can be found. Rest assured, you will love her father as much as she does when the book is done, and perhaps gain some insight about how to cope with your own loved one’s dementia or how to support a caregiver.

Emily Page is a professional artist and part-time writer. Working out of Raleigh, NC, Page spends most of her time elbow deep in paint, but comes up for air periodically to share her art and thoughts on her blog. She translated her ridiculous musings about her family’s journey through her father’s dementia into a book, Fractured Memories: Because Demented People Need Love, Too.