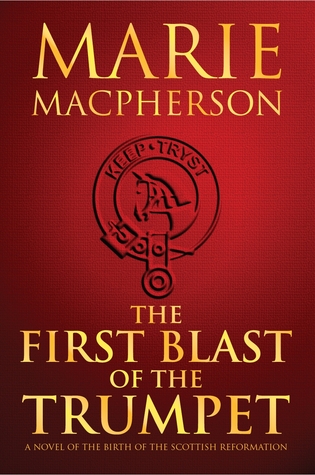 The book is the first of a trilogy about John Knox, a Scottish minister, theologian, and writer who was a leader of the Reformation and the founder of the Presbyterian Church of Scotland, marking the 500th anniversary of his birth. In this first book, Knox plays a minor role to the two main characters: Elizabeth Hepburn, a feisty woman who becomes the Prioress of a convent, and David Lindsey, her one-time lover, who is the long-time tutor and confidant of King James V of Scotland.

The story opens with a charming scene that reminded me of Little Women, where Betsy, the nanny to the three Hepburn daughter, herbalist and possible witch, divines the girls’ fates from the tossing of nuts into a blazing fire. The three girls are completely different in character and although the book traces the fate of little Meg and the voluptuous and fiery Kate, it is the strong-willed Elizabeth who drives the story.

This is a meticulously researched historical novel, right down to the immediate inclusion of a Scots dialect with the English. I must admit this put me off at first, because there were many words I didn’t know and I hardly wanted to take time to look them up. However, as the chapters passed it became clear what the words meant, much like reading English with words represented by only a few letters.

The amount of detail, intertwined plots, religious conflicts, monarchical rivalries, and interpersonal connections are too much for this reviewer to detail, but if a sense of time and place drive your interest in history, and especially Scottish history, you will be in pig heaven.

Ms. Macpherson’s main characters shine with description like bright pennies – the gluttonous and painted Dame Janet, Prioress before Elizabeth; Maryoth, the nun covetous of being prioress, evil and conniving against Elizabeth; John, Elizabeth’s uncle and Prior of St. Mary’s, greedy and eager to have Elizabeth replace Janet, his sister, to keep the rich convent in the family; and Davie Lindsey, Elizabeth’s young lover, who proves feckless and sacrifices Elizabeth more than once to serve his king. If there was any downside to the many characters, it was the number of them, but the author includes family trees and a complete cast of characters for the challenged!

There are no lusty love scenes, although rape and sex abound, so this is not a romantic barn-burner. The author, however, does a great job educating the reader about the social mores of sex, courtship, marriage and child-bearing.

John Knox comes into the tale rather late, as the apparent son of a poor woman, into whose lungs Elizabeth breathes life, then adopts as her godson. He will be a major character in the next two books. This volume lays down the considerable history of the time from Margaret Tudor, sister to Henry VIII and wife of James IV, to the birth and early years of Mary, Queen of Scots, and sets the stage for Mary’s contentious relationship with Knox.

All in all, a challenging and intellectual but satisfying read, which I recommend – but not to the casual reader.

Hailes Castle, 1511. Midnight on a doom-laden Hallowe’en and Elisabeth Hepburn, feisty daughter of the Earl of Bothwell, makes a wish ― to wed her lover, the poet David Lindsay. But her uncle has other plans. To safeguard the interests of the Hepbum family she is to become a nun and succeed her aunt as Prioress of St. Mary’s Abbey, Haddington.

However, plunged into the political maelstrom and religious turmoil of the early Scottish Reformation, her life there is hardly one of quiet contemplation. Strong-willed and independent, she clashes with those who question her unorthodox regime at St. Mary’s, including Cardinal David Beaton and her rival, Sister Maryoth Hay.

But her greatest struggle is against her thrawn godson, John Knox. Witnessing his rejection of the Roman Catholic Church ― aided by David Lindsay ― she despairs that the sins of her past may have contributed to his present disenchantment.

As he purges himself from the puddle of papistry, Knox finds his voice, denouncing everything he once held dear, but will that include his godmother, Prioress Elisabeth? And by confessing her dark secrets, will Elisabeth steer Knox from the pernicious pull of Protestantism or drive him further down the fateful path he seems hell-bent on; a path that leads to burning at the stake?

In a daring attempt to shed light on a wheen of unanswered questions about John Knox’s early, undocumented life, this novel throws up some startling claims and controversial conjectures.

Book one of The Knox Trilogy.

Marie Macpherson was born in the Honest Toun of Musselburgh, six miles from the Scottish capital, Edinburgh. After earning an Honours Degree in Russian and English, she spent a year in Moscow and Leningrad to research her PhD thesis on the work of the 19th century Russian writer, Lermontov, said to be descended from the Scottish poet and seer, Thomas the Rhymer. The rich history of East Lothian – especially the Reformation period – provides the inspiration for her first fictional work, based on the early life of the Scottish reformer, John Knox. Ms.Macpherson is the winner of the Martha Hamilton Prize for Creative Writing from Edinburgh University and was awarded the title ‘Writer of the Year 2011’ by Tyne & Esk Writers.
Goodreads | AmazonUK | AmazonUS | Twitter