Today we have a review from Fran, she blogs at http://disappearinginplainsight.com/ 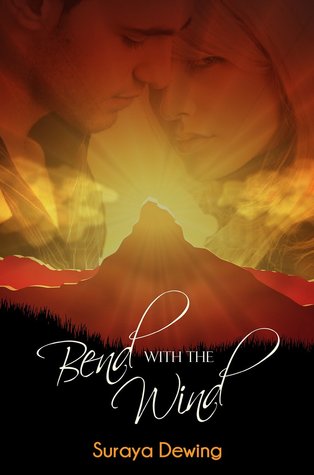 Bend with the Wind is a novel that provides breathtaking descriptions of New Zealand locations, a good bit of history with an inspiring focus on Maori traditions and a romance that is not accepted on either side of a racial divide.

Sophie is a white, privileged, young woman who steps out of her own comfort zone and that of her parents when she falls in love with Joe, a Maori police man who has his own struggles – neither fully accepted by his Maori people or the white police force he is part of. The parts of the story I enjoyed the most revolved around the ways Sophie and Joe go about meeting the challenges of their evolving relationship.

Much of the couple’s early struggles are set against a protest of the 1981 Springbok soccer team’s visit to New Zealand. Sophie, an idealistic, student activist, is right in the middle of the protest opposing the team’s visit due to South Africa’s system of apartheid. Joe finds himself on the opposite side of the mess as a police officer who has to remove the protesters. There is a good deal of irony in all of this as Joe must act against his own people and his ideals while Sophie, the rich, white girl ends up on the receiving end of the violence set in motion by the protests.

This novel involves some time-shifting from the present to the not so distant past and then the distant past. Each time the reader is shifted from the past to the present he or she comes with a few more pieces of the puzzle the author has woven. For me, this time shift worked well between present day Sophie and Sophie as a young woman. I did feel as though the 1800’s Maori history with Te Whiti o Rangomai took me too far from the story I wanted to read. But that is only one reader’s opinion.

The book is worth reading for the romance, for the wealth of information on Maori traditions and for Suraya Dewing’s adept use of language. Consider this description of a street – “ . . . bright with flashing neon, car-beams and light-leaking shop fronts.” Brilliant. And these few lines could be autobiographical – “She was back being a word washerwoman, carrying her sentences in a basket, shaking them out and hanging them with care on the line, placing them in the sun to dry.”

Find a copy from Amazon.co.uk or Amazon.com

Our guest today is Suraya Dewing author of yesterday’s book Bend With The Wind, here is a link to the post if you missed it. http://wp.me/p2Eu3u-5JC

My home town is currently Auckland, New Zealand. However, I grew up in a remote part of New Zealand, Hokianga. The Hokianga shaped me. Auckland educated me.

When I graduated from University I began a career as a trainee television director then went on to Public Relations. So, in that sense, I have been writing for 30 years. Like many creative writers I always wanted to write creatively but put that on hold because I needed certainty of income while we raised our family. In 2008 I returned to University and completed a Master of Creative Writing in 2009. I worked on ‘Bend with the Wind’ during 2009-10. Before that I had written short stories whenever I got the time (pretty average I must confess) and had a go at a novel which was awful.

What was the one idea which parked off Bend With The Wind?

The premise behind the novel is that a group might feel they have got away with an act of oppression. For a time the repercussions are hidden. However, resentment gathers momentum and eventually explodes. Usually an unrelated catalyst ignites the fire and violence becomes inevitable.

Where about in New Zealand did you set the settlement that Joe’s parents live?

Joe’s parents lived in a settlement called Parihaka which is in Taranaki, North Island of New Zealand. It is about ten miles out of New Plymouth.

Can you tell the readers a little about Colonel Messenger

Col. Messenger was a long serving member of the military in Taranaki and commanded an Armed Constabulary Post for a number of years.   In 1871-72 he was in command of the unit that pursued Titokowaru, a Maori leader and a government opponent. After the campaign Colonel Messenger returned to the Armed Constabulary Post and a nearby mountain was named after him in recognition of the period he spent surveying the area and protecting the land. He led, along with Col. Bryce, the troops into Parihaka. He was well regarded by settlers but for Sophie, being related to anyone associated with the history of the occupation was an anathema. This explained her reaction when she finds his name on their family tree.

How did they stop the Maori people from returning to their lands?

When the militia occupied the area they posted guards and no-one was allowed to return. Later, some received passes. At the time of the occupation and arrest of Te Whiti and Tohu homes were plundered, livestock killed and crops destroyed. The women were raped. Anyone who tried to get back was threatened and chased off. The land was in the hands of the militia for five years.

What were the Black Power group all about?

The Black Power gang lives outside the law and is largely made up of marginalised Maori and Pacific Island men. They live off income from drugs and the proceeds of crime.

Tell us some of the things that Joe did for young people to help them.

Joe helped the young people get back to their roots and to regain a sense of self worth. Many people were disenfranchised by the loss of their land. They were also banned from speaking Maori at school and the only legitimate history was that of the English which bore no resemblance to the world they knew. Afraid their children would be disadvantaged later in life, many Maori parents wouldn’t allow the children to learn anything of their heritage including language. He would have taught them their language, te reo, carving, whaikorero (speech making), local history going back many centuries and carving.There was a commonly held belief that being familiar with Maori culture would not allow Maori to get ahead in the world. This was true. Any connection with their culture was frowned upon by Pakeha authorities and often Maori parents supported this stance. He would have given them back a sense of pride in their heritage by taking them back to Parihaka, to the elders to hear the unacknowledged stories belonging to them.

My publisher has requested a book of short stories so I’m working on those. Once they are finished I will go back through Bend with the Wind before my publisher produces it in hard copy.

Tell us about The Story Mint and where readers can find out more about you.

The Story Mint is a service that aims to give writers an opportunity to develop their writing skills, to get to know other like-minded people and to grow their profiles by demonstrating their story telling skills. We provide ways for them to do that including writing chapters and starters for serials, putting writing up on the Writers’Pad and getting engaged in the forum. We also have an active Facebook page and Linked In group. I have created an online analysis tool called the Style Guide™ which analyses writing styles. The writer submits a piece of writing and is immediately given feedback on the style and how to change it if it doesn’t fit with the intended audience’s preferred style. For example someone writing a romance novel will not want to have his or her writing land in the section where business articles land. The Style Guide™ is currently being tested for training writers who are second language users.

Find a copy of Bend With The Wind here from Amazon.co.uk or Amazon.com

Bend with the Wind by Suraya Dewing

Bend with the Wind is set on New Zealand and weaves a story around the Maori people and their struggle for survival under White rule, over a period of just under 130 years.

We meet Sophie first at a Maori funeral. Then the story steps back thirty years to a time when Sophie was just nineteen years old and setting out to study a course in History about New Zealand and South Africa. This coincides with a planned rugby tour by the Springboks which is causing widespread protest due to the apartheid in South Africa.

Sophie and her friends are white teenagers and she has had a privileged upbringing. She meets Joe a Maori police officer. Joe introduces her to his family and through her college course she learns of the settler disagreements which took place in the 1800’s and of the Maori leaders in those disputes Te Whiti and Tohu who preached peace and fair sharing of the land.

Their mixed race relationship causes plenty of hardships and these are mixed with the parts that both play in the Springbok tour. It was a harrowing time for many involved and their relationship is stretched to breaking point many times.

This is a very powerful book full of very strong emotions and humbling lessons. Throughout the book the chapters are interspersed with the Maori language, some of which the reader can guess at, but I was pleased to find a Maori translation section at the back of the book. The messages in their words are beautiful and their traditions are uplifting. I shed a tear or two at the final funeral send off in this lovely book.