Barb has been reading Loud Pipes Save Lives by Jennifer Giacalone 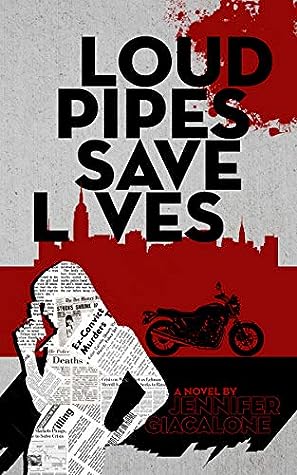 During filming of the Bogart/Bacall classic, The Big Sleep, the plot was so convoluted that neither the director nor the cast knew who committed at least one murder. A cable was sent to author Raymond Chandler, who told his friend Jamie Hamilton in a March 21, 1949 letter: “They sent me a wire … asking me, and dammit I didn’t know either”. It didn’t matter. It was the chemistry and banter between the lead characters which made it a classic detective noir.

That’s how I feel about Loud Pipes Save Lives. Despite the fact that the large cast lives in New York City along with roughly nine million other people, their lives intersect constantly. Girl motorcycle vigilantes rub shoulders with the mayor whose chief of police knows the newspaper publisher whose sister is a detective who is being manipulated by the district attorney who has a big beef with the deputy mayor who knows where the bodies are buried and whose brother is friends with the brother of the girl motorcycle ganger…

Don’t worry if you missed any of that because it doesn’t matter. The banter is so much fun, the pace so rollercoaster, the characters so very flawed, that I raced through the book in one caffeine-fueled late night session. Author Jennifer Giacalone had me with her first quote from Zen and the Art of Motorcycle Maintenance. She cemented my love with her characters’ joyful embrace of the variety of relationships that every New Yorker encounters before they get their first coffee of the day—gay, multi-ethnic, asexual, stupid, smart, handicapped, cross-religious, and of course, liberally laced with obscenities.

And she ensured her automatic-buy place in my book-heart with her combination love affair with New York—“The city didn’t care. It lay serene as they all loved and teemed and scrambled and strove. And then it was morning.”—and just plain wonderful writing. “The lights had been lowered in the room to that level where everything looked like it was covered in a layer of honey and everyone was twice as attractive.”

So sure, this book has all the tropes of any damaged detective/police procedural. There is the cop who naturally distrusts her superiors, journalists, and politicians. She’s got a past full of trauma, a family who are frankly even more messed up than she is, and a city to clean up. The villains aren’t all bad and the good guys are pretty flawed. But just as with Bogey and Bacall in The Big Sleep, none of that matters. Because… women motorcycle vigilante gangs, a LOT of leather, Zen and The Art of Motorcycle Maintenance quotes, New York City, the kind of True Love that ruins your life and the kind that saves it, and serious amounts of world-class snark. Hell, yeah!

If you’d like a fresh voice with attitude, great writing, flawed characters, and a completely convoluted story I’d recommend Loud Pipes Save Lives.

New York City Detective Lily Sparr is stunned when she is inexplicably moved to the very same precinct that once upon a time handled her own father’s murder. There, she is assigned to the case of a women’s motorcycle club which has been committing acts of violence all over the city. Despite missing her former partner, Miri, and fighting the ghosts of her past, Lily dedicates herself to the case, unaware that her own sister is mixed up in the swirl of violence and chaos.

After secretly reopening the file on her father’s death, Lily slowly unravels  threads of history, discovering that both cases lead to corruption and betrayal at the highest levels.

Featuring an ensemble of characters as diverse as its New York City setting, Loud Pipes Save Lives is a thriller-mystery with a twist of queer representation.